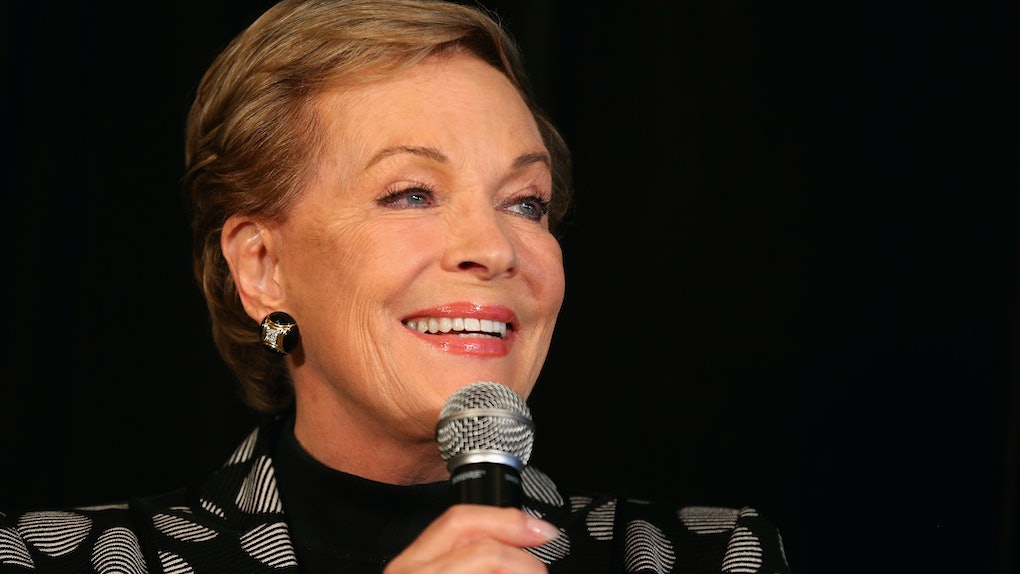 Julie Andrews is practically as synonymous with Disney magic as Mickey Mouse himself, but she's teaming up with another entertainment legend for her next role. You're out of luck if you're still hoping for Andrews to step back into the shoes of Mary Poppins, but fans of Shonda Rhimes should take notice of the star's upcoming work. Julie Andrews' role in the new Shondaland Netflix series is different than what she's best known for, but it ought to be a juicy performance. Let's break down what fans may anticipate from her.

ICYMI, Grey's Anatomy creator Shonda Rhimes left her position at ABC Studios in 2017 for a multi-year production deal with Netflix. While she still has creative ties to ABC's Grey's Anatomy, How to Get Away with Murder, and Station 19, Rhimes' new projects will now launch on the streaming service. In July 2018, she announced her work on a TV adaptation of Julia Quinn's Bridgerton romance book series. With each story focusing on one of the Viscount Bridgerton's children, the eight-book series takes place between 1813 and 1827, ensuring that a lavish Regency romance TV show is on its way to Netflix queues.

In the adaptation's first casting announcement, Mary Poppins star Andrews will voice the character of Lady Whistledown, an anonymous London gossip columnist whose tidbits send the city's high society into disarray. Um, Gossip Girl, is that you?

According to TVLine, Netflix's logline for the eight-episode drama reads:

From the glittering ballrooms of Mayfair to the aristocratic palaces of Park Lane and beyond, the series unveils a seductive, sumptuous world replete with intricate rules and dramatic power struggles, where no one is truly ever on steady ground. At the heart of the show is the powerful Bridgerton family. Comprised of eight close-knit siblings, this funny, witty, daring and clever group must navigate the upper ten thousand’s marriage mart in search of romance, adventure, and love.

The production team is aiming for a 2020 release of the still-untitled Bridgerton series. Rhimes and Betsy Beers will executive-produce the adaptation, while Scandal producer Chris Van Dusen helms it. It's definitely risky for anyone to build new work on an entirely different platform than usual, but if you add Julie Andrews to the already intriguing concoction of Shondaland and Netflix, success feels imminent.

Andrews' involvement marks the latest in several voice roles throughout recent years. She voiced Karathen in Aquamen and played Gru's mother Marlena in the Despicable Me films. The Academy Award winner also co-created and starred in the Netflix series Julie's Greenroom, so voicing a character in the Bridgerton series won't be the first time Andrews has worked with the streaming service.

As for Rhimes' other Netflix projects, nothing is set in stone yet, but she released her series plans in a 2018 New York Times piece. Fans may soon see The Residence, an upstairs-downstairs series about the American presidents and the White House staff, and Hot Chocolate Nutcracker, a documentary about dancer and Grey's Anatomy star Debbie Allen. Rhimes will also oversee the adaptations of shows based on books about sexism in Silicon Valley and African-Americans moving from the Jim Crow South to elsewhere.

If you're a devout follower of ABC's TGIT programming, it looks like Rhimes' Netflix work will be just as satisfying. Until Rhimes reveals more about her new romance series, I'll be imagining Andrews uttering Gossip Girl lines in Regency-era England.