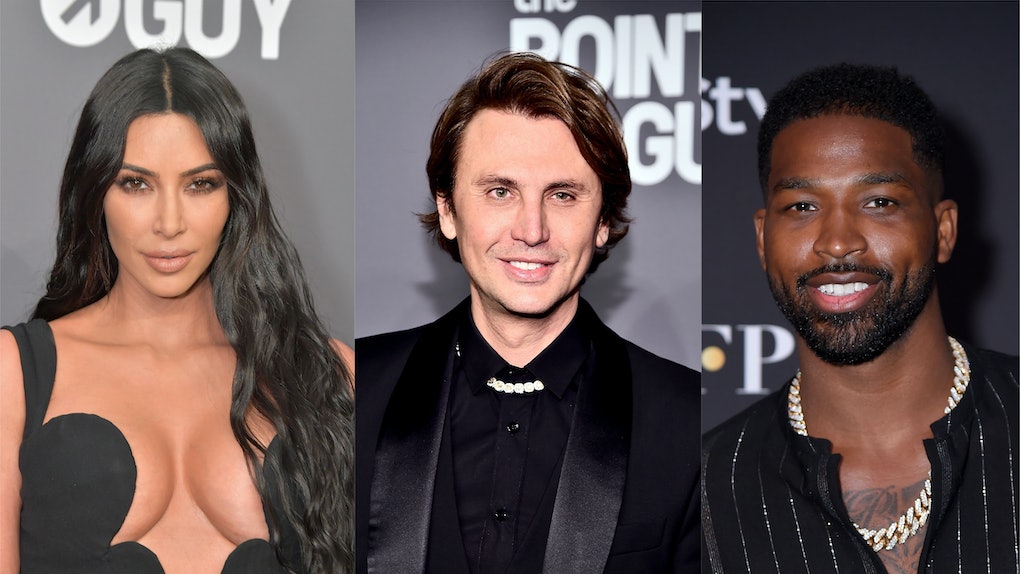 On Sept. 11, news came out that Kim Kardashian and Tristan Thompson had dinner together. OMG, what? I know, I couldn't believe it either. I mean, Thompson is Khloé Kardashian's ex and if you've seen any episode of Keeping Up With The Kardashians as of late, you'll know that things didn't end well between Thompson and Khloé. So why would Kim reportedly have dinner with her sister's ex? Was it to talk things over or did they just happen to coincidentally run into each other? I don't know what the deal is between Thompson and Kim, and Jonathan Cheban's quotes about dinner with Kim Kardashian and Tristan Thompson aren't giving me any real answers, either.

Jonathan Cheban is Kim's close friend and KUWTK fans will recognize him from the show. Well, apparently on his Sept. 19 Foodgod OMFG! podcast, Cheban confirmed that he, Kim Kardashian, and Tristan Thompson all had dinner together. He also revealed that despite all the drama that happened between the Kardashians and Thompson, he still really likes Thompson.

"We were having dinner," he said. "I don't know exactly what happened, but Tristan did come in the middle of the dinner. And you know what, I'm probably gonna get a lot of crap for it, but I like the guy. I like his vibe. I could hang out with him and go to the mall with him."

Hmm, I have so many questions. Did Cheban and Kim just happen to be at the same restaurant as Thompson at the same time? Did they invite Thompson for dinner and he was just late? I need more info Jonathan Cheban! But based on what he said next, it seems like he's keeping the details from the mysterious dinner locked away for now.

Cheban said, "I don't want to talk about the past actions or that girl. I don't want anything to do with that. It's none of my f*cking business. All I know is, that yes, we were there. I know there was a picture of us eating on TMZ, so it's no secret that he did come in the middle of it…Kim was there."

I need to know more about what really went down. But who knows? Maybe fans will find out on KUWTK in the future. Now that would be an episode I would watch. I'm really curious to hear what Kim Kardashian and Tristan Thompson had to say to each other.

Further along in the podcast, Cheban also shared his overall thoughts about the infamous Tristan Thompson and Jordyn Woods cheating scandal.

I don't know what went on in the middle. I'm cutting that part out of my head. I know what happened, but I'm just saying I don't want to talk about it. If that didn't happen, I think that him and Khloé are a dope couple. The baby is cute. What I am saying, as a person, not what he did, I like his vibe. I like hanging out with him. He's just so funny, he knows everything…I know he, obviously, loves the daughter.

It seems that Cheban is still rooting for Khloé and Thompson. If you ask me, I'm not sure if Thompson and Khloé could ever reconnect, especially after Khloé Kardashian's IG quote about "foolish" love, which fans thought was totally meant as a message to Thompson.

Honestly, I'm just as lost as you are about the whole Kardashian and Thompson drama, so I'm just going to wait it out and see what happens.