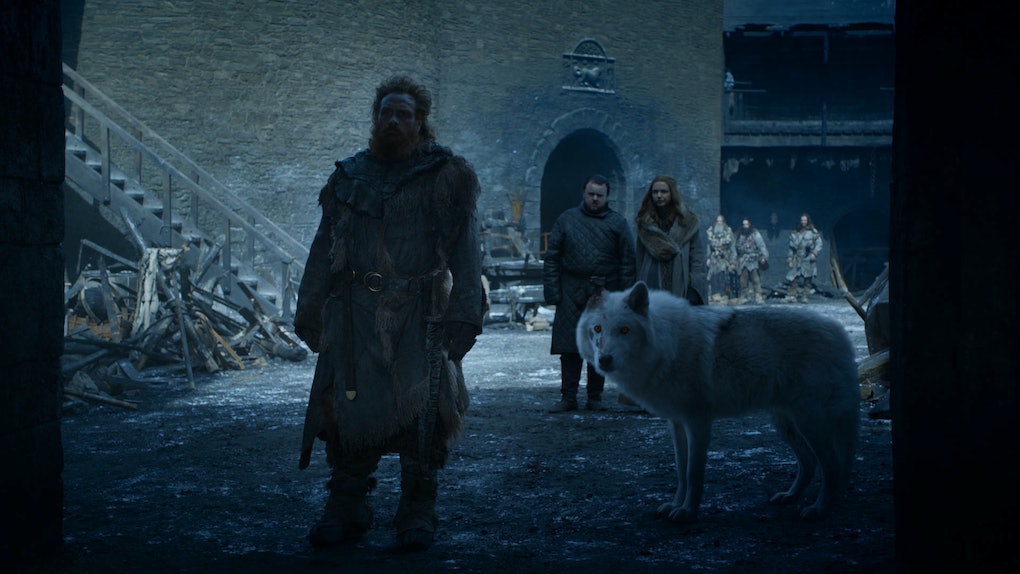 Game of Thrones has finally come to a close for good, folks. While the finale was filled with emotional twists and turns, there was one moment in particular that got a pretty strong reaction from fans, and for a really good reason. Jon and Ghost reunited in the Game of Thrones finale and fans are finally satisfied that Ghost got the loving he deserved.

In case you forgot about Jon's last interaction with his direwolf, Ghost, allow me to jog your memory. In Game of Thrones Season 8 Episode 4, "The Last of the Starks," Jon is seen preparing to leave Winterfell to head to King's Landing and fight for Daenerys. As he's wrapping up his preparations, he leaves Ghost with his longtime wildling friend Tormund, who viewers assume will take Ghost beyond the wall to live with the free folk. Though it was sad to see Jon and Ghost separate, the saddest part of their goodbye was that Jon didn't even hug or pet his tired and sad-looking dirwolf as he walked away from Winterfell, making many fans seriously question Jon's character. After the episode, @rosadona tweeted, "my only GoT commentary for the night is that i cried over ghost and jon’s goodbye and jon couldn’t even like, pet him..." TBH, that's pretty much what we were all thinking.

But Jon redeemed himself two episodes later in the series finale, "The Iron Throne." At the end of the episode, all the Stark siblings are shown in their new roles — Bran is the new king of Westeros, Sansa is the queen in the North, Arya is headed wherever is west of Westeros, and Jon is shown walking north of the Wall, where he's reunited with Tormund, his other wildling friends, and most importantly, Ghost, who Jon (finally!) affectionately pets.

Needless to say, fans went wild over the sweet moment between Jon and his pup. Twitter user @kodeerants wrote, "Jon got to touch Ghost and that’s the only thing I care about in the series finale of Game of Thrones. #GameofThrones." Another Twitter user @HannahRae95, wrote, "If you think I lost it when Jon reunited with Ghost then you are absolutely right I am surrounded by tissues and wine stains." Honestly, same.

Other people shared pictures and GIFs of the first time Jon met Ghost, further reinforcing the cuteness of the moment.

The rest of Twitter just shared pictures and GIFs of people crying, because yeah.

Though there were a lot of happy feels related to Jon and Ghost's reunion, the series finale of Game of Thrones was also filled with a lot of other kinds of feels. The most obvious moment that elicited a strong reaction was when Jon stabbed Daenerys, killing the breaker of chains and mother of dragons many had come to love so deeply (before her killing rampage during Season 8 Episode 5, that is). The very end of the episode, when all the Stark children were shown moving toward the next phases of their lives, was also very emotional.

Though fans don't know what will happen next in Westeros, west of Westeros, or beyond the Wall, everyone can at least breathe a sign of relief that Jon and Ghost are reunited and free.

More like this
10 Questions The ‘Schitt’s Creek’ Finale Left Unanswered
By Rachel Varina
Simu Liu's Tweets About The 'Kim's Convenience' Finale Promise "Tea & Receipts"
By Dylan Kickham
Is Meredith Actually Recovering On 'Grey's Anatomy'? She Finally Woke Up
By Abby Monteil
Stay up to date