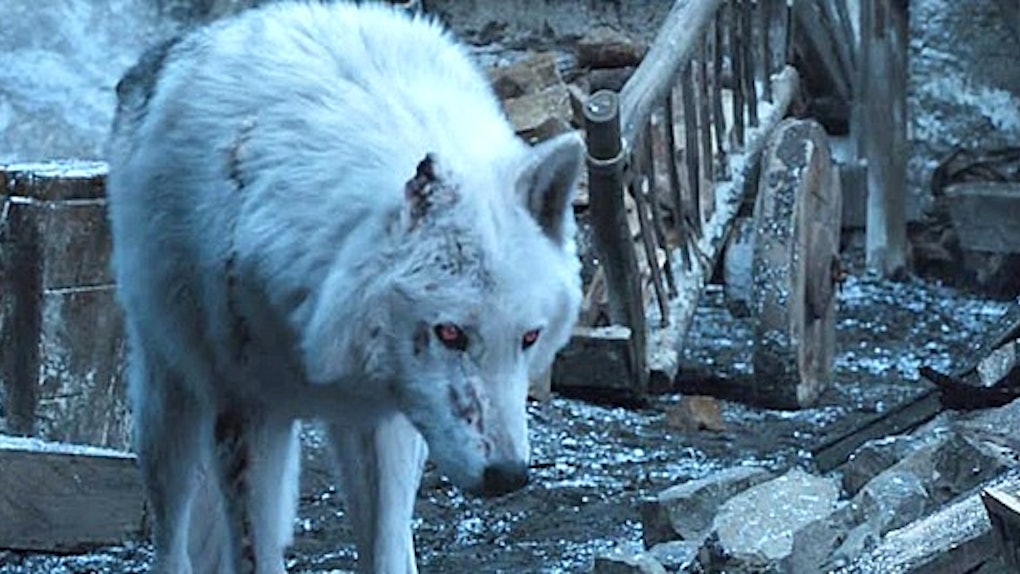 There was a lot for fans to get upset over in Game of Thrones Season 8 Episode 4. Hearts were broken, characters died, and heroes moved even farther from their goal of sitting on the Iron Throne. But there was one plot point in the episode that had fans more outraged than anything else: Jon Snow saying goodbye to his beloved direwolf Ghost. It isn't so much the fact that Jon said goodbye to Ghost, as much as it's how he said goodbye to him. A lot of fans feel Ghost and Jon Snow's goodbye on Game of Thrones was less than Ghost deserved, and now the director of the episode is letting everyone know why.

In Game of Thrones Season 8, Episode 4, "The Last of the Starks," Jon prepares to leave Winterfell for possibly the last time. When he does, he entrusts his Wildling friend Tormund to take his direwolf Ghost back North with him. It makes sense, since the South is no place for a direwolf, and Ghost deserves to have a happy, peaceful life in the snowy North. Jon's known Ghost since he was just a small pup, and the direwolf looks like he sacrificed an ear during the Battle of Winterfell. These should have been more than enough reasons for Jon to give Ghost a heartfelt goodbye. Instead, their goodbye was distant, to stay the least. Jon simply shared a lingering glance with Ghost and then... that was it.

How could Jon leave behind such a good boy without at least a pet goodbye? Fans on Twitter had a lot of feelings about the way Jon treated his best bud.

It turns out that there is a reason Jon didn't have a more intimate goodbye with Ghost, and it doesn't have much to do with his character. It actually has a lot more to do with the series' CGI budget. Episode director David Nutter explained to HuffPost that the show didn't have the budget to show Jon closely interacting with Ghost. “Since the direwolves are kind of CG creations, we felt it best to keep it as simple as possible,” Nutter said to HuffPost. “And I think that it played out much more powerfully that way.”

In another interview with HuffPost, visual effects supervisor Joe Bauer explained that the direwolves require a lot of extra work to get them right. "The direwolves are tough because you don’t want to get them wrong, so we end up always shooting real wolves and doing a scaling trick with them," Bauer explained to HuffPost, "but the real wolves only behave in certain ways."

Since it was too tough for the Game of Thrones to show Jon petting Ghost goodbye, audiences were deprived of a meaningful moment between them. But, John Bradley, who plays Jon's (human) best friend Samwell Tarly, assured fans that Jon and Ghost both still know the value of their relationship. He told HuffPost:

[Jon] was very aware of the sacrifice of leaving those figures behind, and they know — hopefully, Ghost knows what he means to Jon — and Jon knows what Ghost means to him.

Hopefully this won't be the last fans see of Ghost. You can see if he comes back one last time when Season 8 of Game of Thrones continues at 9 p.m. ET, Sundays on HBO.

More like this
This 2021 'Game Of Thrones' Season 8 Trailer Is So Confusing... & So Good
By Ani Bundel
What’s Coming To Disney+ In May 2021? 'Cruella,' 'HSMTMTS' Season 2, & More
By Ani Bundel
What Are The Eldritch Terrors In 'Chilling Adventures Of Sabrina'? They're No Joke
By Dylan Kickham
Stay up to date