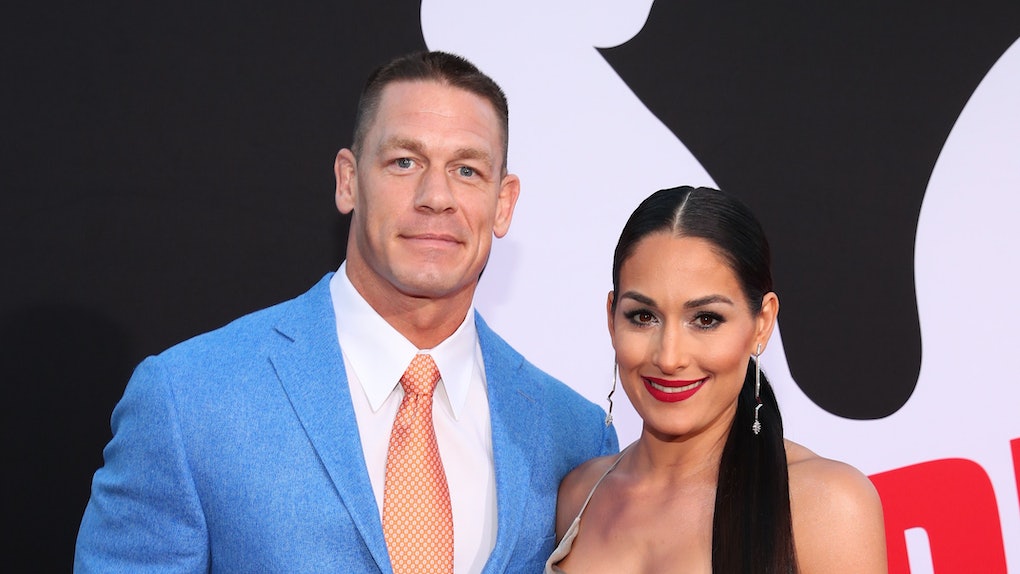 I'm not going to say I'm obsessed with John Cena and Nikki Bella's relationship status, but, well, OK, I'm obsessed. They just seemed like the perfect couple, based on both the things they've said about one another in the press and John Cena and Nikki Bella’s body language on the red carpet. So, when they called off their wedding, I just didn't see it coming. Still, I am holding out hope for these two crazy kids to work it out — and they just might.

But I'm getting ahead of myself. Let's take a step back...

For those of you who haven’t been following along with every up and down of this celebrity couple, here's a quick rundown of their relationship. The two met through wrestling and became friends, but they didn't officially begin dating until John finally worked up the nerve to ask Nikki to dinner in 2012. In 2016, the couple blew their fans away when John dropped to one knee in the ring at Wrestlemania 33 and asked Nikki to marry him. In the year that followed, all seemed blissful, as the couple gushed about each other and their wedding plans.

There was one problem though: They disagreed about having children — she wanted them, he definitely didn't — but it seemed that they were at peace about that decision. That is until, seemingly out of nowhere, they announced their breakup just two weeks before the wedding. Fans of the couple were shook. There is some good news though, as there are pretty solid rumors that the couple has secretly reconciled. While neither has confirmed that to the press yet, they have both spoken publicly about how much they still love one another and hope to be back together.

Since they aren't talking, I decided to call in the big guns, aka the body language experts. We asked body language expert and author of Persuasion Point: Body Language and Speech for Influence, Traci Brown, and body language expert Blanca Cobb, to help us figure out if there were any signs the couple was headed for a breakup prior to the wedding, and what we can learn about their chances of getting back together and staying that way. Here's what the experts had to say.

The first thing that Cobb zeroes in on in this image is the angle of their bodies. She points out how they are angled toward each other, “which suggests that they’re feeling the love,” according to Cobb. “They’re standing close together with John’s arm wrapped around her back and his hand resting on her hip. When you feel close to someone, you want to be close to them.”

Brown agrees that the pose shows a couple that is very connected. “Here we see that they're posing for the camera but giving each other their energy," Brown says, adding, "Notice their feet pointed towards each other? And see how his hand is wrapped all the way around her waist?” She also notes that John looks especially happy in the photo, saying “He's not one for a toothy grin but he's got that dimple that says he's really happy.”

2. By March 2018, there appeared to be some cracks in the relationship.

Although only a few months had passed between the images, Cobb sees that there is some tension and disconnect growing between the two of them. She points to the angle of their feet as proof.

“His body and feet are angled more toward Nikki then the other way around," Cobb notes, adding, "Based on Nikki’s body angle and feet orientation towards the camera instead of John, this suggests that they aren’t in sync.” Cobb also notes the tension in John's hand that wasn’t there previously. “Notice that John’s fingers are drawn up, which suggests he’s feeling a little tension.”

But it's Nikki’s pose that might be the most revealing, as Cobb says, “Nikki’s stance is in a runner’s pose where one foot is in front of the other. It’s almost as if she wants to be somewhere else. It doesn’t look like a comfortable way to stand.”

3. In April, there are clear signs of trouble in paradise.

Taken about a month before the couple was set to wed, this photo, according to both experts, shows a couple who is out of sync. Brown says this photo reveals “that there's a little trouble in paradise.” She explains, “His face is pleasant but we don't see the dimples of real happiness like in the other two pics.” She adds, “he's hiding his thumb again and their V [pose] isn't as tight." (The V-pose is one where a couple's bodies are touching on one side and branching out on another, in the shape of a V.)

Cobb sees a couple that is still close, but that there is growing tension. As she says, Bella’s left shoulder is leaning against John’s and the sides of their bodies are touching.

"When you feel close to someone, you tend to get physically close to them." However, she also notes, “Again, notice his fingers are slightly closed, suggesting some stress.”

4. But despite the tension, there was always a lot of love between John and Nikki.

While the couple may have been experiencing tension in the dynamic of their relationship, there was never any loss of emotional connection and love. Brown notes how sweetly affectionate John is in the photo, pointing out that “a kiss is great!” and that the affection is reciprocal, noticing that, “She's got her hand on his chest, showing ownership.”

But still Cobb, sees that there are problems in the relationship that the couple are trying to keep private. “Again, their body angles are off, which tells me that something is a little off between them," she explains. "Nikki has her hand on his chest, which at first glance looks tender and welcoming. But, can also be a sign of stopping him from getting closer. When you [have] conflicting body language, positive and negative, you’ll believe the negative over the positive.”

All this makes sense in light of the couple having broken things off. However, considering the rumors that their relationship is getting back on track, I asked what these photos say about the chances for this relationship. Cobb says the diagnosis is good.

“Overall these two are consistent and really connected," she says. "So, my guess is that the rumors are true, that they do love each other and want to get back together.” Yay, love lives!