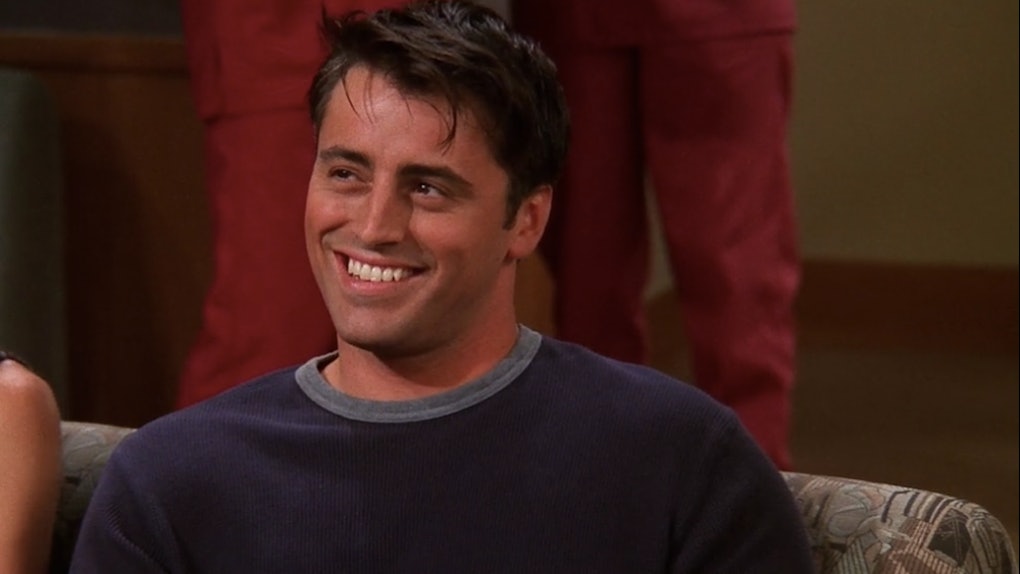 Odds are, if you're a millennial, then you've seen (or at least heard of) Friends. The hit show from the '90s lasted ten seasons, and with good reason. The characters are honest and relatable, and the vibe between their group of friends is something most everyone wants for themselves. It's basically an ode to friendship, and it was chock-full of some brilliant one-liners. Some of the best? Joey Tribbiani’s best pick-up lines from Friends, which is a list not for the faint of heart.

Now, if you're unfamiliar with the sitcom, then first of all, how is that possible? Second of all, worry not. All you really need to know is that the series follows six friends living in New York City as they discover more about themselves, find their places in life, and fall in love. Joey Tribbiani is one of the main characters on the show, and certainly the most charming one, IMO.

While Joey doesn't have one main love interest throughout the show, he certainly tries. And with his sweet smile and brilliant pick-up lines, Joey certainly has a way with the ladies. So, here are a few of his best lines, to inspire you to up your game.

Now, maybe I'm impartial, but this is probably my favorite Joey pick-up line. It's so good, in fact, that when Joey tells it to Ross he warns him that "you're going to want to have sex with me when you hear it."

Basically, it's a made up tale of going hiking in Europe and seeing a beautiful woman crying. It's an impressive story, and an impressive line. Honestly, I would probably fall for it.

Sure, nowadays it's a bit of a cliché, but Joey's idea to use the cuteness of Ross' baby to try and pick up women was pretty smart back in the day. Again, I would probably fall for it. It makes him seem sensitive and caring, and with his sweet smile, who could resist?

So this isn't just one line Joey uses, but throughout the series, he plays up his role on the fictional version of Days Of Our Lives, and uses it to land the ladies. In fact, when he and Rachel go out on their date, he even admits that when he's really putting on the moves, he likes to have a bottle of wine sent over "from a fan."

Of course, that line isn't complete without Joey's own fake modesty. "This is so embarrassing," he tells Rachel of how he plays it. I would probably actually find this annoying, but Joey is using what he's got, and that's never a bad idea.

A classic. When Joey asks someone "how you doin'?" in that classic Joey way, you can't help but smile and fall in love a bit. Seriously, it's basically what Joey is known for on the show, and it usually works out for him.

It's simple, it's to the point, and it actually works. Of course, the line wouldn't be the same without Joey's smile and deep, soothing voice. But still, I'm pretty sure Joey Tribbiani invented this line, and it's the perfect representation of who he is: simple, sweet, and charming.

Joey is one of the best characters ever, and his pick-up lines are straight proof. Now, go through a "how *you* doing?" to your next Tinder match ASAP!

More like this
Lauren Speed-Hamilton Is Hosting 'Match Me If You Can,' Your New Favorite Dating TV Show
By Hannah Orenstein
10 'Gossip Girl' Actors Who Dated Each Other IRL
By Corinne Sullivan
Are Olivia Lux & Utica Dating After 'Drag Race'? Olivia Gave An Update
By Dylan Kickham
Stay up to date