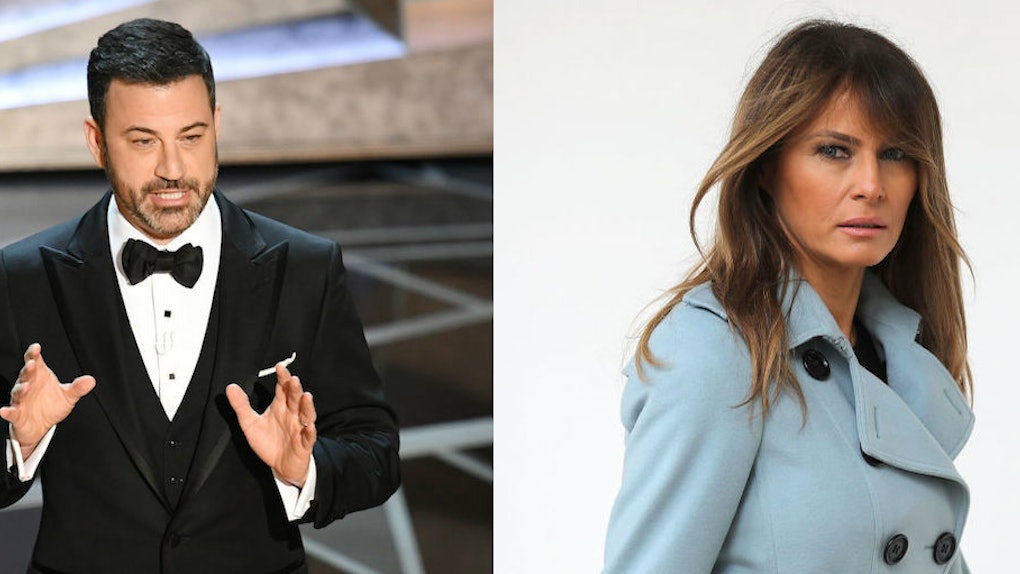 Even I am not sure that this is worth your time. Two straight-white-cis male fixtures of late night TV have spent the better part of last week arguing like idiots on Twitter, but it seems like it might finally be coming to an end. ABC's Jimmy Kimmel apologized for his Melania Trump joke, which apparently triggered a d*ck-measuring contest on Twitter between him and Fox News' Sean Hannity.

It all started when Kimmel mocked Melania Trump's accent in a segment on his show on April 2. He played a clip of her reading to children at the annual Easter Egg Roll and mocked her pronunciation of "this and that." Hannity was not pleased. On his show on April 5, he called Kimmel a "despicable disgrace" and an "ass clown."

"Mr. Kimmel, that's her fifth language," Hannity quipped. "How many do you speak?"

That kicked off a ridiculous insult war between the two TV personalities, which continued to escalate as each traded remarks about the other using their respective TV shows and on Twitter.

On Sunday, April 8, Kimmel, apparently growing tired of the back-and-forth (as many Americans already had felt), tweeted a lengthy apology for the Melania joke — and addressed criticisms that some of his insults of Hannity were homophobic.

Kimmel addressed a broader trend of hateful language in America, and conceded that he no longer wanted to contribute to it, saying,

Even in 2018, the vile attacks against my wife and wishes for death on my infant son are shocking and I encourage those who made them to give their words and actions thought. I, too, will give my words more thought and recognize my role in inciting their hatefulness.

The back-and-forth had escalated quickly, with Hannity digging up an old Comedy Central sketch Kimmel did on The Man Show, in which he made people on the street guess what item he was hiding in his pants. Hannity tweeted the video clips out, coining the phrase #PervertKimmel and referring to him as "Harvey Weinstein Jr."

Kimmel and Hannity continued trading barbs, and the whole thing was pretty juvenile, with Kimmel at one point asking if Hannity "would want his daughter being 'grabbed by the p*ssy.'"

Some people found a few of Kimmel's tweeted insults of Hannity to be homophobic. "When your clown makeup rubs off on Trump’s ass, does it make his butt look like a Creamsicle?" Kimmel said in one tweet. "Don't worry — just keep tweeting — you'll get back on top! (or does Trump prefer you on bottom?) Either way, keep your chin up big fella..XO," he said in another tweet.

All of this seemed disenchanting to many people watching the entire feud play out on Twitter.

In Kimmel's apology, he referenced the homophobic backlash, albeit dismissively. "By lampooning Sean Hannity's deference to the president, I most certainly did not intent to belittle or upset members of the gay community and to those who took offense, I apologize," he said.

Will it end here? Probably not. Hannity said he would address the apology on his show, April 9.

Fox News' take on Kimmel's apology has already been distorted, which makes it likely that Hannity is not going to accept Kimmel's white flag. The outlet spun his apology as a defense of a "mean-spirited dig at Melania Trump."

As reported in The New York Times Magazine, in November 2017, Hannity has taken a hard stance in defense of President Trump and his surrogates. He also has the ear of the president, per The Daily Beast, and reportedly advised Trump during his handling of the Nunes memo in February.

Kimmel has made it clear that he doesn't want to continue the vitriol with Hannity, but, historically, Hannity isn't really averse to vitriol. So, yes, it's possible Hannity may come out on April 9 and acknowledge Kimmel's apology and be done with it. But it's more likely that Hannity will come out swinging twice as hard, criticizing Kimmel's apology and demanding remediation on behalf of the first lady.

It's definitely important to notice how Kimmel's reputation for being a liberal Hollywood talk show host has upset some in the gay community, but beyond that — why are we letting two male TV show hosts take up so much of our time? If Bill O'Reilly weighs in on this then it'll be like a trifecta of machismo TV dopes who — wait, what's that? O'Reilly already did stick himself into the feud? Alright. That's enough of that, then.