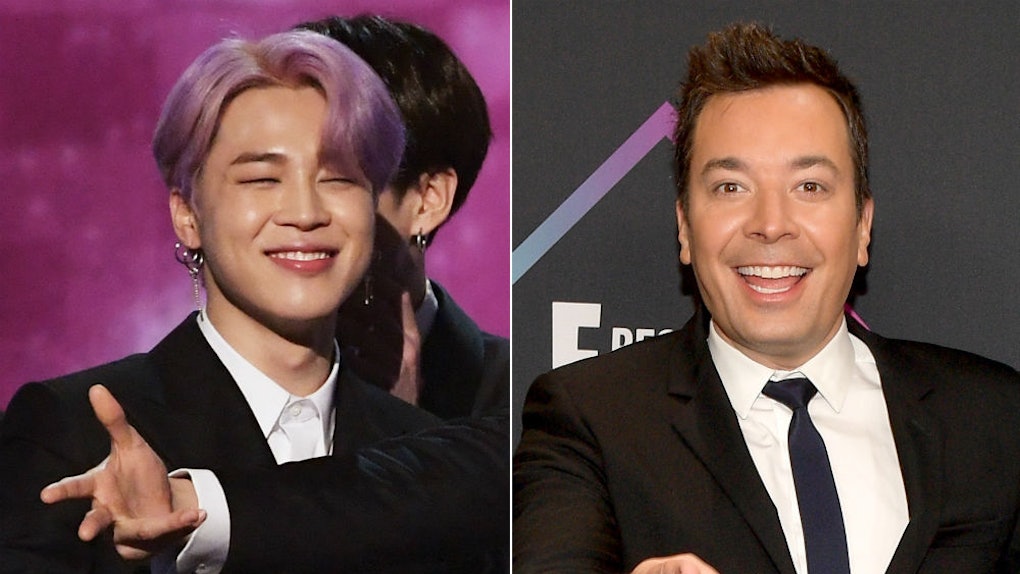 It’s no secret that Jimmy Fallon loves BTS. He’s had the guys on his show and has even expressed a very special appreciation for his bias, Jimin, on various occasions. But what makes Fallon the ultimate BTS fan is his willingness to take his love for the band to new heights. Take his tweet about searching for a new clock for his end table, for example — which resulted in a BTS fan suggesting a Chimmy Clock to him. Well, Fallon picked up on it right away and put the clock on the very top of his list! Jimmy Fallon's tweet about BTS' Chimmy Clock proves what they say is very true: Once you Jim-IN, you can't Jim-OUT!

It all started with Fallon tweeting about his dire need for a new clock. He turned to fans on Twitter for help in selecting one.

“Twitter help. I want a clock for my end table,” Fallon wrote. “It doesn’t need to have an alarm - I just would like to know what time it is. And none of that glowing light things. My kids wake me up before I can see that magic happen. Small is fine. I have books next to it that I haven’t read.”

That’s when a die-hard BTS fan chimed in and told Fallon that he absolutely needed a Chimmy Clock, which is an alarm clock adorned with Jimin's BT21 character, Chimmy. You can check it out and even buy it here. The Chimmy Clock is touted as being “loud enough to wake you up from your sleep” and “too adorable that you don’t have the heart to slam it against the wall!” Sounds perfect for anyone who needs to wake up early in the morning (and exactly like our Jimin, huh?)!

Other than its loud alarm and overall cuteness, the Chimmy Clock is super stylish and, according to the item description on Harumio, “makes a nice decoration for your bedside table.”

And that’s exactly what Fallon is looking for, isn’t it? Well, Fallon saw the above tweet from the fan and decided that he really loved the clock. He even tweeted about it!

I mean, of course, Jimmy Fallon would tweet about BTS’ Chimmy Clock. He loves BTS and has loved BTS for a while now. Remember back in September 2018 when he shared a glimpse of himself having a blast with all the guys on his show? He even hyped up their adorable dance challenge:

Make no mistake: Fallon loves BTS as a whole like it's nobody's business, but he also isn't shy about hyping his bias. When the guys were actually on the show, he fanboyed so hard over Jimin (because their names are practically the same) and wore a Chimmy headband throughout the entire interview:

Fallon is such a big BTS fan that he even sent the guys a message of encouragement before they performed at CitiField in New York City in October 2018. He was obviously wearing a Chimmy onesie in the video! Take a look:

So, it makes perfect sense for Fallon to scoop up BTS’ Chimmy Clock. Not only does it meet all his clock requirements, but it goes really well with his onesie. Plus, it’s just so cute. How could you resist?

More like this
These Tweets About Jimmy Fallon's TikTok Dance Follow-Up Segment All Say It's Too Little, Too Late
By Brandy Robidoux
TikTok’s Taylor Swift Era Trend Documents Your Throwback Swiftie Evolution
By Rachel Chapman
How To Do Olivia Rodrigo's "Deja Vu" Challenge On TikTok Like Charli & Addison
By Rachel Chapman
Stay up to date