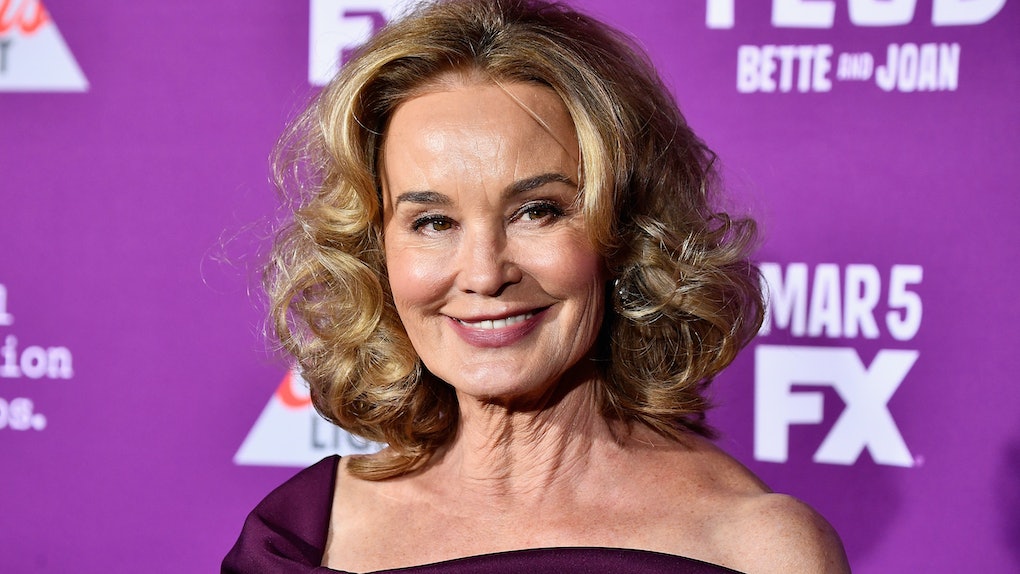 Those of you who keep up with FX's hit series American Horror Story are all too familiar with Jessica Lange — the 70-year-old actress has played pivotal roles in five out of eight seasons of the show, haunting my nightmares every single night since it first debuted back in October 2011. And recently, she even ranked her favorite and least favorite installments of the anthology series in an interview with Gold Derby. Suffice it to say, Jessica Lange's least favorite AHS season will undoubtedly come as a total shock any and all super fans.

Earlier this week on Wednesday, Aug. 14, Gold Derby posted a video to YouTube, featuring an interview with Jessica Lange. The interviewers asked Lange to rank the seasons she worked on, which include: Murder House (Season 1), Asylum (Season 2), Coven (Season 3), Freak Show (Season 4) and Apocalypse (Season 8). And you won't believe what her most preferred and — more importantly — her least preferred seasons are.

Around 16 minutes and 13 seconds into her interview with Gold Derby, Lange admitted she didn't get the chance to watch Apocalypse all the way through yet, and therefore, it doesn't make an appearance on the list. That being said, her ranking goes as follows from best to worst: Asylum, Freak Show, Murder House, and lastly, Coven. Say what?

Yes, you heard that loud and clear, AHS fans — the Emmy Award-winning actor's least favorite installment was Coven, when she played witchy kween Fiona Goode. And despite so many fans ogling over one of the spookiest seasons of them all, Lange said she wasn't wild about the story and its overall set-up. About 17 minutes and five seconds into her interview with Gold Derby, Lange said:

I was stunned that year to get the Emmy for that part. Again, the part was very well-written. I didn’t particularly like the whole set-up and season and story we were telling. I don't know, it was not my favorite.

Despite Lange's lack of enthusiasm for Season 3, she reiterated the fact that she has been beyond grateful to work with Ryan Murphy on each of those five seasons... and it seems as though it's paid off, career-wise. As pointed out by TVLine, the show has won Lange several awards including two Primetime Emmys, a Golden Globe and several other nominations. Pretty impressive, if you ask me.

Check out the entire interview for yourself, below — her insight on the show and as an actor will totally inspire you.

Luckily, the ninth season of the hit TV show is coming out quite soon. AHS: 1984 is set to premiere on Sept. 18, and even though Lange sadly won't be making an appearance this time around, it looks like it's gonna be really, really good (I mean, seriously — Gus Kenworthy is in it!).

I suppose Jessica Lange and I can agree to disagree on this highly important matter — Coven was amazing and nobody can take that away from me. Regardless, I'm really hoping she comes back to AHS in the near future — I live for her spooky roles.