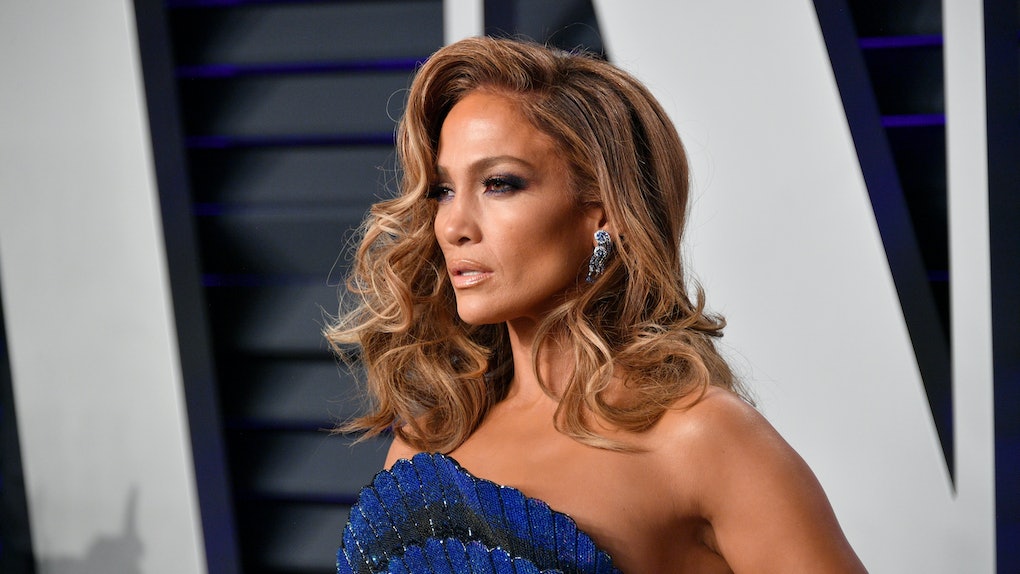 When it comes to filming for her latest role, J.Lo's not messing around. The quadruple threat — actress, singer, dancer, and producer — just posted a photo from the set of her latest film that has my jaw on the floor and my heart beating rapidly. Jennifer Lopez's bikini photo for Hustlers will make you want to buy your ticket for the film right now.

On Sunday, March 31, Lopez took to Instagram to share a snap from her latest movie set, and she looks as amazing as ever. J.Lo's latest Instagram photo showcases her bikini bod for her role as Ramona in the upcoming film Hustlers. The film, which is a true story, stars an all-female cast including Lili Reinhart, Cardi B, Julia Stiles, Keke Palmer, and Constance Wu, and the film will follow a group of former strip club employees who come together to get revenge on their wealthy Wall Street clients. The story is based on a real-life group of women from Scores strip club in New York who did something very similar several years ago. Their story was featured in a New York Magazine article that went viral in 2015.

Though Hustlers is in its early stages of filming, director Lorene Scafaria gave The Hollywood Reporter some insight on some themes movie goers can expect. Scafaria said,

Scafaria also raved about J.Lo's skills and role in the film, noting "There is no other actor who could embody this raw and dynamic character with such complexity, humanity and intelligence. It’s always been her." Scafaria added, "She’s f*ck*ng Jennifer Lopez."

Scafaria makes a really good point about J.Lo. I mean, just look at her:

Lopez captioned her sneak-peek pic with:

I’m a hustler baby... I just want you to know... #Ramona on fire 🔥 On set and in character for #hustlersmovie#stxentertainment

IDK about you, but I'd definitely have to agree that J.Lo as Ramona is the fire emoji personified.

If I were a Wall Street banker in the Hustlers universe, I would absolutely not want to cross her.

Though it's widely known that J.Lo is a great dancer, she recently told Jimmy Kimmel on Jimmy Kimmel Live! that she was learning to pole dance for her role and that she had even installed a portable pole at her house. She revealed to the late night host that she was working with a woman from Cirque du Soleil on her pole dancing technique and that pole dancing is "very hard." She added, "I mean, I have bruises everywhere. It's so hard. I have a lot of respect for people who do the pole."

According to Deadline, Hustlers began filming on March 22, 2019 in New York City and though there's no official release date yet, I'm seriously hoping it comes out later this year or early next year. I mean, the cast and premise are so badass — and, let's be real, I can't wait to see J.Lo/Ramona in action in that bright pink bikini.