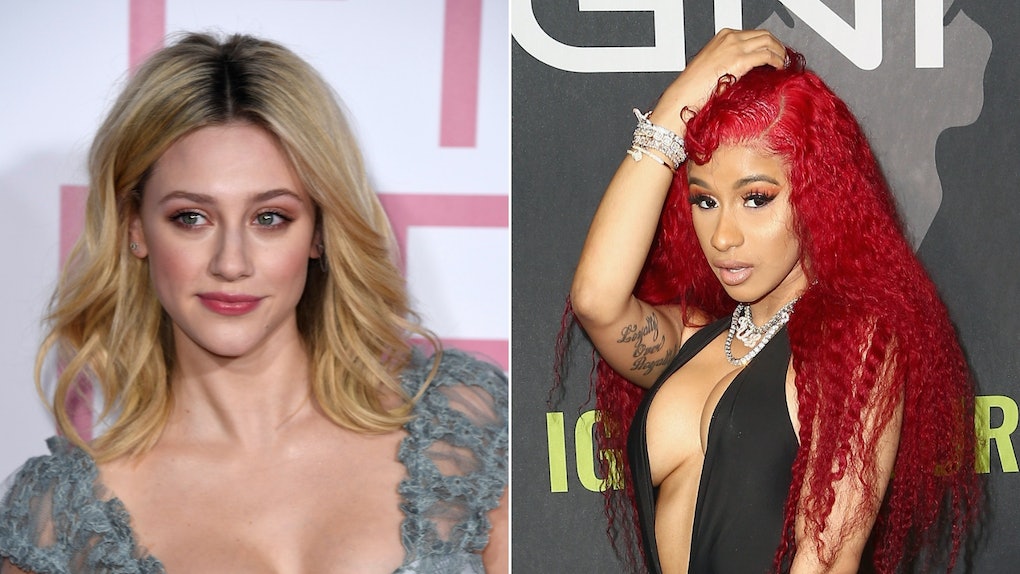 Lili Reinhart, Cardi B, & JLo Will Star In 'Hustlers' As Badass Strippers

The upcoming movie Hustlers is sparing no expense in rounding up a cast of some of the biggest names in Hollywood to star in the salacious story of strippers exacting their revenge on their Wall Street clientele. The all-female cast will include the movie debut of rapper Cardi B, as well as the first major film role for Lili Reinhart since gaining a fanbase as a star of Riverdale. And those aren't the only names to get excited about! Lili Reinhart, Cardi B, and JLo will star in Hustlers, alongside a bunch of other major actresses, Deadline has revealed.

Jennifer Lopez will take the helm of Hustlers as a former stripper and the ringleader of a group of woman who are resolved to use their insider knowledge of strip clubs to steal massive amounts of cash from the wealthy men in Manhattan who frequent them. The movie will also star Cardi B, Lili Reinhart, Constance Wu, Keke Palmer, Julia Stiles, and Mercedes Ruehl. Mette Towley and Trace Lysette are both also in discussions to join the movie's all-female cast.

The upcoming movie marks Cardi B's acting debut. The rapper has television experience as a former star of the reality series Love & Hip Hop: New York, but this will be her first time portraying a character on the big screen. It also marks Constance Wu and Lili Reinhart's first major movie roles since achieving new levels of fame, thanks to the blockbuster Crazy Rich Asians and the hit TV series Riverdale, respectively. Jennifer Lopez recently worked with Cardi B on their 2018 collaboration "Dinero."

Hustlers is about a group of strippers who swindle their wealthy clientele out of large sums of money, and it is actually based on a true story. The new movie is adapted from a 2015 New York Magazine profile about former strip club employees who used their wits to steal exorbitant amounts of money, frequently from clients who worked on Wall Street.

The piece lauded the scheme as a "modern Robin Hood tale," and the movie will share in that feminist viewpoint. Director and screenwriter Lorene Scafaria told The Hollywood Reporter that Hustlers will dissect the gender roles that society places on both women and men:

Now that Hustlers seems to have worked out its main cast of women, we can probably expect it to begin production sometime soon. There is no word yet on when Hustlers may hit theaters, but hopefully it will premiere before the end of 2019, or possibly in the beginning of 2020.