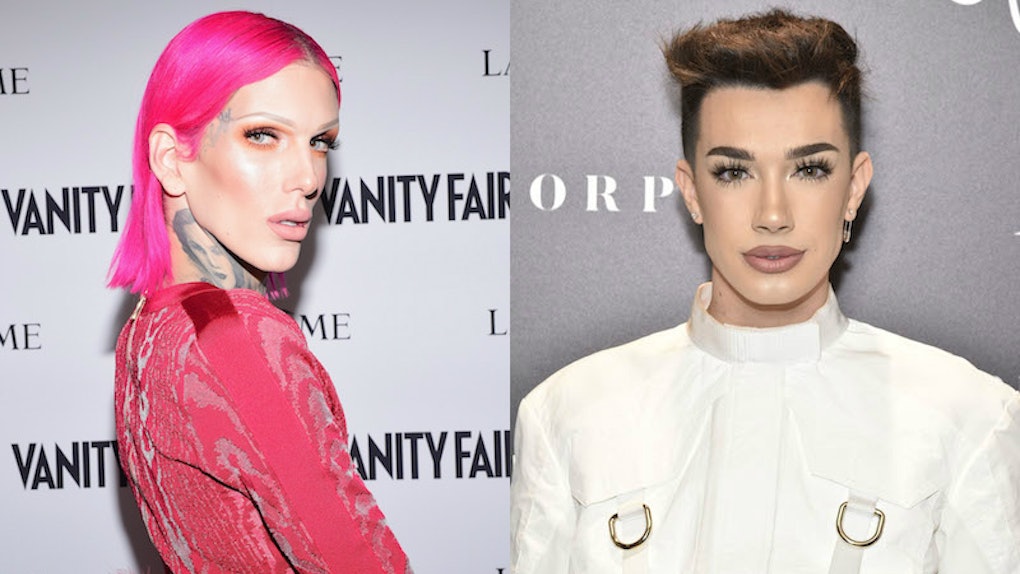 Few industries in this world are as fraught with drama as YouTube's beauty influencers. Believe it or not, the amount of shade that can be cast with a product review or tutorial video challenges any shade effect a contour kit could give your jawline. (That's a bunch of pop culture makeup-isms for you.) Everything Jeffree Star has said about James Charles proves my point. The two popular makeup gurus have careers that run parallel to one another and originally started out as friends and collaborators. Then, there was all that Drama with a capital D between Charles and OG makeup YouTuber Tati Westbrook, and Star had some feelings.

To be fair, Star — who is no stranger to controversy and criticism himself — was in the game way before Charles was, like, born. Star started out on the vintage social media platform MySpace, where he first splashed onto your computer screen bringing lippies and lashes to the people at home.

As for Charles, he capitalized on the platforms available to him years later and charged into the YouTube cosmetics scene as a young 16-year-old. Together, they are quite the dynamic, high-cheek-boned duo. However, where there are false lashes, there's also usually competition, and in this case, bad blood.

Here's a sprinkling of some of the feelings and opinions Star has on Charles, snatched cheekbones be damned.

He called Charles a "danger to society."

Amid the Tati Westbrook feud, Star jumped on Twitter to make it super crystal clear whose side he was on. In a since-deleted tweet, Star wrote:

There is a reason that Nathan [Schwandt, Star's boyfriend] banned James Charles from ever coming over to our home again. There’s a reason why I haven’t seen him since @GlamLifeGuru’s birthday in February. He is a danger to society. Everything Tati said is 100% true.

Gee, Star, tell us how you really feel. Elite Daily previously reached out to Charles regarding Westbrook's claims, but did not hear back by the time of publication.

Then he kind of took it all back?

10 days after Westbrook shared her initial video and Charles responded with a video called "No More Lies," Star jumped onto his own channel to set the record straight regarding his involvement. During his own 13-minute vent session in a video titled "Never Doing This Again," Star said that he and Charles once had "a real connection" and that he "loved and cared about him."

Star even claimed he "mishandled" his friendship with the 19-year-old mogul. It looked as though he was taking responsibility for "inserting himself where he shouldn't have" and aiming to clear the air.

He stands by his claims that Charles made him uncomfortable.

In Westbrook's first video, she accused Charles of trying to sexually manipulate a waiter at a dinner party. Star, who was also at the dinner party, admits around the 5:30 time-stamp in the video above: "After Seattle, yes, me and Nate were very uncomfortable with some things that had happened ... We really weren't on the same vibe." However, Star claims there were other people chiming in who were putting thoughts in his head, and ultimately...

That's kind of major when you consider all the extreme nasty things that were being tossed around.

"There were things being told to me that were never proven, um there was a lot of rumors, and sadly I let that get to me," Star explained. "So James, I want to say that I should have never sent you those messages, I should have been a better friend, I know that now and even if we weren't close friends anymore, I should have handled it way differently."

Well, overall, while it doesn't seem like Star and Charles will ever be super close again, at least they've been able to settle any beef brewing between them. Who's got time for the drama anyway?

More like this
Is James Charles Single? Here's What To Know About The Sister Squad Star's Love Life
By Tara Martinez
Madison Beer's Response To Constant Online Bullying Got So Real
By Brandy Robidoux
William & Kate's New YouTube Channel Is Getting Mixed Reactions
By Brandy Robidoux
Stay up to date