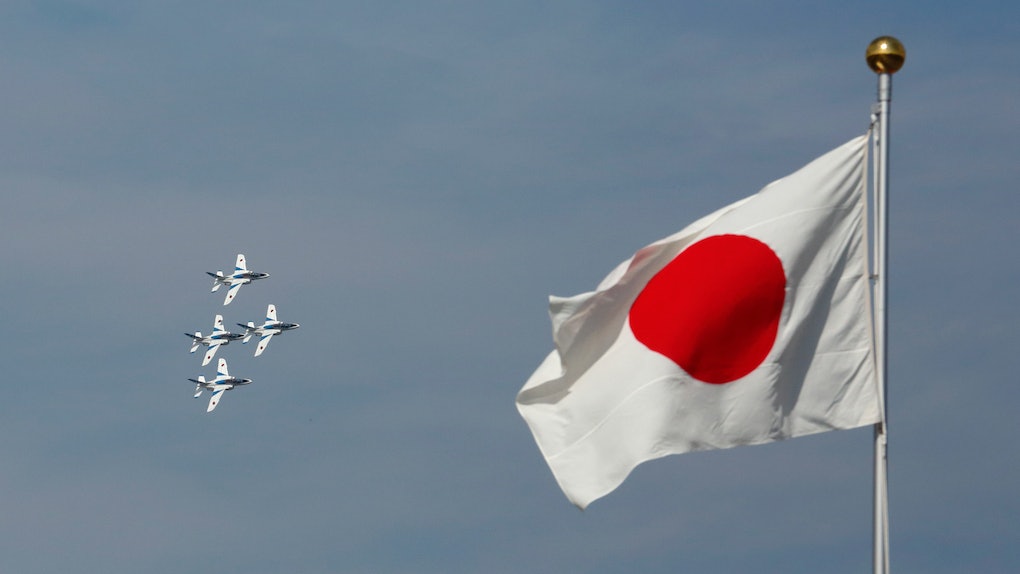 Sometimes a simple action can lead to big changes. Or, at the very least, important conversations. It's notoriously difficult for mothers in Japan to properly manage a work/life balance, and one woman in government is doing her damnedest to change that. Japanese politician Yuka Ogata brought her baby to work, and sparked the very beginnings of an important movement.

On Nov. 22, Ogata, a member of the Kumamoto Municipal Assembly, arrived for her first day back at work after giving birth, cradling her 7-month-old baby in her arms. But before the session had even gotten started, the new mother's male colleagues asked her to leave, according to Buzzfeed News.

The reasoning? Assembly rules state that “visitors are not allowed to enter the chamber during a session under any circumstances.”

None of this seemed to come as much of a shock to Ogata. She didn't really bring her son to work because she had to, but rather as an act of solidarity for Japanese mothers who are struggling with the challenges of raising their children.

“I wanted to appear in the assembly hall with my baby and represent the voices of mothers, working and nonworking, who tell me they’re struggling to raise a child in Japan,” Ogata told The Washington Post. “Women want to be able to raise a child and work happily without having to sacrifice one of these things.”

A Japanese-language video also showed the moment when Ogata and her extremely calm baby were confronted by her colleagues and told that her child could not stay. After 40 minutes of discussion, Ogata eventually left her young son with a a friend, and resumed her seat, per the Post.

Japan is currently facing a shortage of childcare options. For the past three years, the wait list for state-funded daycare has continued to climb, The Guardian noted. Meanwhile, Japanese mothers — like Ogata — continue to face pushback from their male colleagues when it comes to the work/life challenges they face.

In June 2014, Tokyo assemblywoman Ayaka Shiomura faced verbal abuse when she gave a speech discussing the lack of services offered to Japanese mothers. Shiomura attempted to broach the subject of the difficulties of riding a Tokyo train with an infant, along with some broader issues like infertility, but was swiftly interrupted. CNN reported that some of Shiomura's male colleagues heckled her, and called out things like, "you should get married!" and "can't you even bear a child?"

Ogata doesn't want women to have to deal with this sort of abuse — and she believes that change starts with restructuring the male power dynamic in work settings.

“The whole reason why it’s so difficult to raise a child and have a career in Japan is because there are no women with children involved in the decision-making process,” she told the Post. “I’m determined to change that.”

It seems that her mission has struck a nerve throughout Japan.

"You can bring children to our company," one tweet read, as translated by Buzzfeed. "We had a visitor who brought their child last week; I, myself, have brought my child to interviews. The photo is from the time I brought my child to work. Kumamoto Prefecture is my hometown, so I felt speechless [when I heard the news]. I hope [society’s] atmosphere will become something like, ‘it’s not a big deal, we can do meetings and negotiations even if there’s a child around.'"

"Our church has a kids room on the second floor. To parents with children, please don’t worry and come visit us," said another.

A third tweet's message translated as, "Our company is okay to work with us! I work while supporting each other," accompanied by a photo of an awesome-looking little playground occupied by several toddlers (and women) mugging for the camera.

“Just like how Ms. Rosa’s defiance shone a light on structure of discrimination against black people,” Komazaki told Buzzfeed News. “There’s a necessity to shine a light on an oppression that is considered a matter of course, and say ‘well, actually that might be wrong’.”

Keep fighting the good fight over there in Japan. A group of determined mothers is a powerful force.