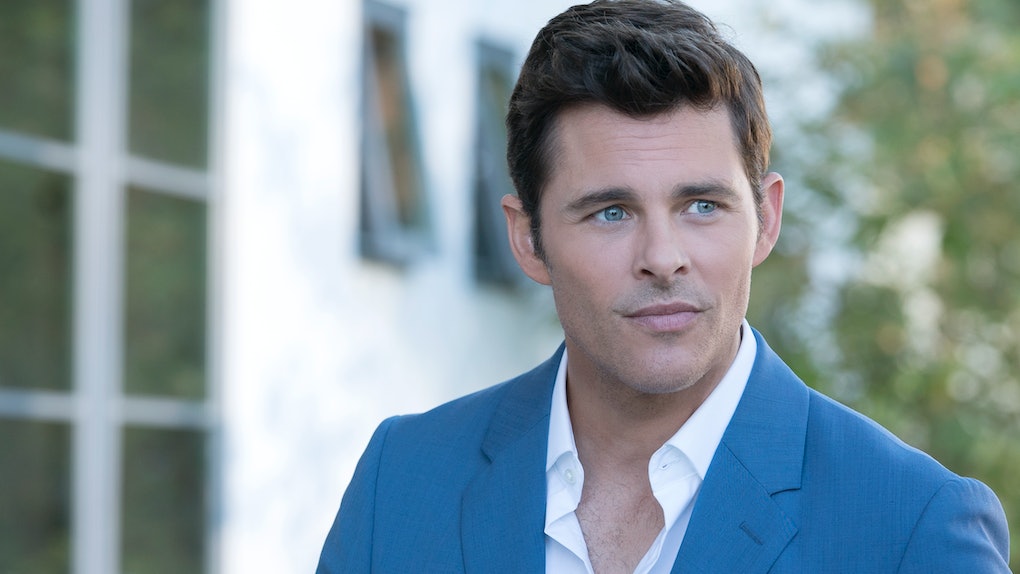 James Marsden is known for playing a lot of good guys. There's his cowboy hero on Westworld, Liz Lemon's perfect boyfriend on 30 Rock, and a literal prince in Enchanted. James Marsden's Dead to Me character, on the other hand, is a bit more complicated. The new Netflix half-hour series tells the story of two women Jen (Christina Applegate) and Judy (Linda Cardellini) who have both suffered great loss and trauma in their lives. Steve is Judy's ex-fiancé, who weaves in and out of her life in shocking ways. But what's even more surprising is the darkness and mystique that Marsden brings to the character.

Speaking with Elite Daily, Marsden explains that at first his character might appear completely likable, but on Dead to Me, things are never exactly as they seem. "He’s charming but he’s an expert manipulator and he can manipulate circumstances and people to sort of bend to his agenda," Marsden reveals. "And there’s good things and bad things that come from that."

In the past, Marsden's characters have been pretty straightforward to understand and easy to like. On Dead to Me, though, he's able to play with that trope and twist it on its head.

"I like to play characters that think they’ve got it all figured out and then life or circumstances prove to them that they don’t," Marsden says, "And then watch them kind of backpedal and tread water."

[Dead to Me] is allowing the humor to come from sometimes the most unexpected places, which in this show it’s death and grief and loss.

When Marsden received the script for Dead to Me, he was immediately drawn to Steve. He elaborates, "I read the character and I was like, this is somebody that I’m so different than in real life, it would be kind of fun to sit down and play with the guy for a bit."

In fact, Marsden wasn't planning on working on anything when his agents brought Dead to Me to him. He had just finished working on the upcoming Sonic the Hedgehog movie and was looking forward to a break. But, the combination of the character, the story, and the creative team behind the project drew him in.

Half-hour shows are usually comedies, but Dead to Me can't be neatly categorized as just a drama or just a comedy. Marsden explains, "It feels very real and it’s not hitting punchlines and jokes. It’s allowing the humor to come from sometimes the most unexpected places, which in this show it’s death and grief and loss."

Often times life isn't only funny or only sad. It's a combination of the two, and Dead to Me captures that mix well. Marsden believes that audiences will be able to easily relate to a lot of the themes that the show touches on.

"I think we all go through loss and we suffer through grief in our lives," Marsden describes, explaining how life is reflected in the series. "And it’s who we lean on to get ourselves through those times, what it reveals about our character as we go through it, and how sometimes humor can come from some of the most unexpected places."

So what can fans expect from Dead to Me? According to Marsden, they can pretty much expect the unexpected. He explains, "It’s dark. It’s a very, very black comedy. But the device is using loss and connection to provide the moments of comedy, so the audience can be like, 'I don’t know whether this is a comedy or a drama but I love it no matter what it is.' It’s more of a mirror of reality."

You can see Marsden's new character on Season 1 of Dead to Me on Netflix now.