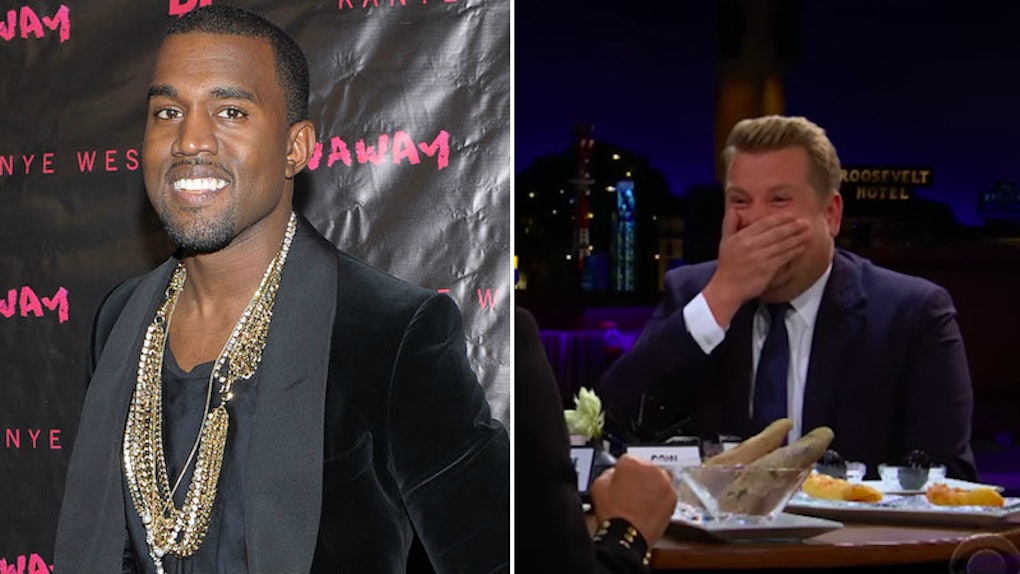 There are fewer people in this world that I find funnier than James Corden. The Late Late Show host manages to make me laugh pretty much every time I watch him — especially when his recurring segment, Carpool Karaoke is on. He's had dozens upon dozens of absurdly famous artists sing along with him, and it's entertaining AF to watch. So when Corden invited momager Kris Jenner to his show to play a game of "Spill Your Guts Or Fill Your Guts," where you either have to answer a personal question or eat something atrocious from a table of horrors instead, Jenner immediately wanted to know why James Corden has yet to invite Kanye into his car to sing with him. And let me tell you, James Corden's comments about Kanye West canceling Carpool Karaoke will make you go, "Oh, snap!"

So here's what happened. Jenner was first to ask a question — and remember, if James Corden decided not to respond, he would have to eat Jenner's choice of a disgusting food item. She chose the 1,000-year-old egg (is this really a thing? Can anyone tell me?), and hurled her question to Corden, asking about her son-in-law, Kanye West.

"Why haven't you done a Carpool Karaoke with Kanye yet?" she asked, as the audience erupted in "Oooohs!"

But LOL, joke's on her! Corden basically laughed, because he was literally eager to share the answer with her and his fans.

Corden continued, saying, "He canceled once as I was turning the corner to his house. I was in a car, and by the time the call finished, I was sat outside his house and they were like, 'He’s not in the zone for it right now. We’ll do it another time,'" and honestly, is there even a more Kanye move to make?

But don't worry, 'Ye sent Corden a little ~something~ as an apology for the whole ordeal (or should I say ordeals?).

"He did send me a lovely gift," he told Jenner. West not only sent him a "cube of flowers," which Corden has never seen before (nor have I, for that matter), and a pair of Yeezy sneakers, because obviously.

But it gets even better, because James Corden was more than happy to call out Kanye just one more time.

As he was referencing the Yeezy sneakers, he said, "People were like 'Whoah, they're so expensive!' and I was like, 'Yeah, they cost my show $45,000!"

GAME OVER. JAMES CORDEN HAS WON AT LIFE. THE END.

After Jenner shot him a look of, "Oh no, you didn't just go there," Corden tried to lighten up the situation. "But we love him! He's my dream, he knows that! He's my absolute dream."

You wanna know what my dream is now? Finally getting to watch Kanye on Carpool Karaoke. Can we make that happen? like immediately?

And hey, if that doesn't ever end up happening, at least I got to watch Kris Jenner drink a sardine smoothie.