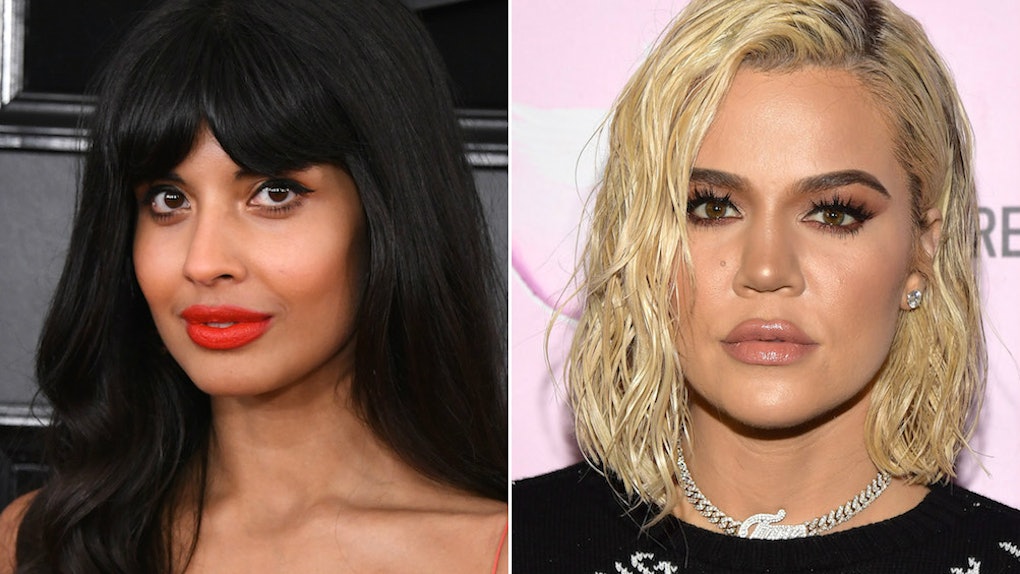 The Kardashians have finally responded to The Good Place actress Jameela Jamil's regular criticism of their continued promotion of meal replacement shakes. The actress, outside of her TV credits, has made a name for herself by being openly and unapologetically critical of dieting culture, which often manifests in criticism of ads the Kardashian sisters post to their Instagrams promoting diet products from companies like Flat Tummy Co. The family has never responded to her until this past week, and now, Jameela Jamil's response to Khloé Kardashian defending weight loss shake promo is here. And it's... admittedly a lot.

But first, context! The last Jamil Kardashian criticism came less than two weeks ago, when Jamil commented on Khloé Kardashian's sponsored Instagram post promoting Flat Tummy Co.'s meal replacement shakes. Kardashian posted the Instagram on March 21, but it has since been deleted.

Jamil went in on the Kardashian and the promotion in the comments section.

If you're too irresponsible to: a) own up to the fact that you have a personal trainer, nutritionist, probable chef, and a surgeon to achieve your aesthetic, rather than this laxative product...And b) tell them the side effects of this NON-FDA approved product, that most doctors are saying aren't healthy [...] then I guess I have to... It's incredibly awful that this industry bullied you until you became this fixated on your appearance. That's the media's fault. But now please don't put that back into the world, and hurt other girls, the way you would have been hurt. You're a smart woman. Be smarter than this."

In an interview with The New York Times leading up to the Season 16 premiere of Keeping Up With The Kardashians on March 31, the family was asked about Jamil's criticisms. Surprisingly enough, Kris Jenner, Khloé and Kim Kardashian gave a response.

And they were pretty lame.

“I don’t live in that negative energy space," Jenner said to the outlet. "Ninety percent of people will be really excited about the family and the journey and who we are.”

In reference to Jamil's comments about having a fitness trainer, Khloé said, "Well, listen, I am showing you what to do, silly person, 15 repetitions, three times, here’s the move…”

It's not clear if she meant "silly person" in a general way or if she was calling Jamil silly.

Really, Kris? You don't live in that "negative energy space"? That's your response to very legitimate and rational criticism? Cute.

Kim Kardashian's response was all about money.

“If there is work that is really easy that doesn’t take away from our kids, that’s like a huge priority, if someone was faced with the same job opportunities, I think they would maybe consider," she said. "You’re going to get backlash for almost everything so as long as you like it or believe in it or it’s worth it financially, whatever your decision may be, as long as you’re OK with that.”

Jamil was not impressed by any of this.

She tweeted an article about the sisters' responses and said,

Essentially, 'f*ck the young, impressionable people, or those struggling with eating disorders, we want the money.' I have been given these same opportunities to flog this stuff, and I don’t do it, so they don’t have to. Thank you, next.

Elite Daily reached out to the Kardashians' team for comment on Jamil's tweets, but did not hear back.

In another (more graphic) tweet, Jamil said, "Their pockets are lined with the blood and diarrhea of teenage girls..."

Kind of gross. But I also get her point.

A Twitter user, who was largely in agreement with Jamil's criticisms, tried to claim that it's a consumer's responsibility to make sure they're not buying products that are potentially harmful to their bodies. Jamil shut that down as well.

"Yeah DUMB teenage girls with eating disorders. Be smarter," she sarcastically tweeted. "This is your fault little girls. Shame on YOU not the grown billionaire adults preying on your insecurity and fear. Preying on the patriarchal value that women are only valuable if their aesthetic meets societal standards."

I'm 100 percent with Jamil on this whole thing. There is no scientific evidence to back up any of the diet fads the Kardashians are paid to promote.

Dietician Alexandra Parker said in a 2017 interview with Huffington Post that "the theory that we need to follow a specific diet to help our body eliminate toxins is not supported by nutritional science." In other words, DETOX TEAS DON'T WORK.

And the Kardashians' reasoning for brushing off Jamil's criticism are pretty unsatisfying to me. Kris is cool with the promotion of the products because any criticism you receive over it is just "negative energy?" The physical and mental health of your fans isn't something you brush off with an "F the haters" comment. And Kim, you'll promote the products if they pay you enough? Girl, OK.