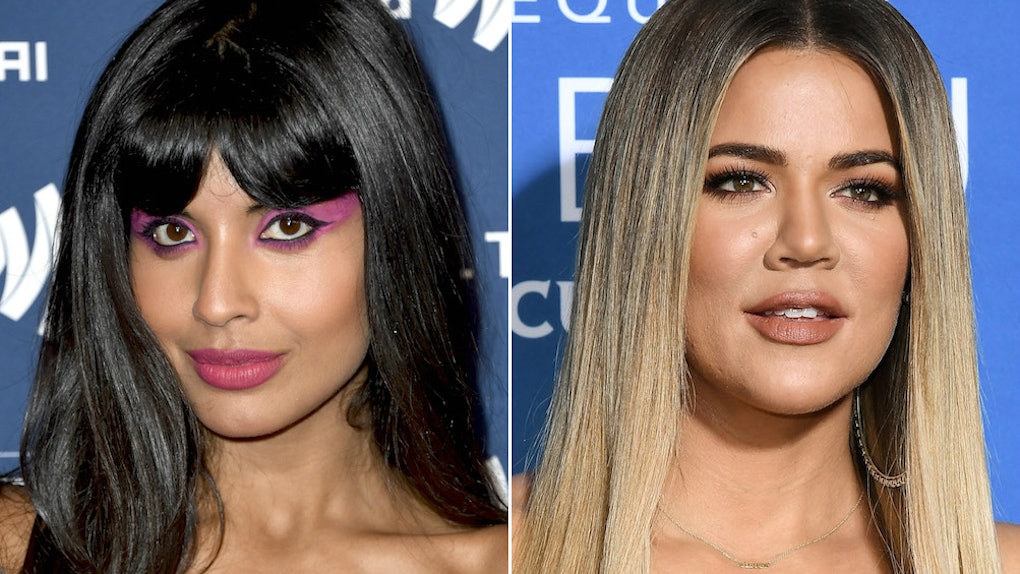 Jameela Jamil might have gotten through to Khloé Kardashian. Jamil has been openly and unapologetically critical of the famous family and their promotion of "detox" teas and "diet" shakes for a long time. The Kardashians have remained tight-lipped about her criticisms, which included accusing them of "selling self-consciousness" to their young, impressionable fans. But they recently gave their first response, and despite somewhat standing by her promotions in the interview, Khloé Kardashian actually ended up deleting one of her sponsored posts. And Jameela Jamil's reaction to Khloé Kardashian deleting her dieting shake ad puts a (brief) lid on this whole arc.

This current Jamil/Kardashian drama began when Khloé Kardashian posted a sponsored ad in partnership with Flat Tummy Co. promoting the company's meal replacement shakes. Note: there is no scientific evidence to support that "meal replacement" supplements and "detox" teas actually help contribute to weight loss. Jamil is acutely aware of this, and frequently speaks out against the Kardashians for helping to sell these products that she feels are harmful to young women.

Jamil commented on this since-deleted post imploring Kardashian to stop posting these ads and accepting money from these companies.

If you're too irresponsible to: a) own up to the fact that you have a personal trainer, nutritionist, probable chef, and a surgeon to achieve your aesthetic, rather than this laxative product...And b) tell them the side effects of this NON-FDA approved product, that most doctors are saying aren't healthy [...] then I guess I have to... It's incredibly awful that this industry bullied you until you became this fixated on your appearance. That's the media's fault. But now please don't put that back into the world, and hurt other girls, the way you would have been hurt. You're a smart woman. Be smarter than this.

In an interview with The New York Times published on March 30, Kris Jenner, Kim, and Khloé Kardashian all responded to Jamil's criticisms.

“I don’t live in that negative energy space," Jenner said to the outlet about Jamil's comments. "Ninety percent of people will be really excited about the family and the journey and who we are.” That is... truly a lame response.

Referencing Jamil's comments about her workouts, Khloé then said, "Well, listen, I am showing you what to do, silly person, 15 repetitions, three times, here’s the move…” somewhat defending her sponsored ads. It's not clear if she said "silly person" in a general sense, or if she straight-up called Jamil a silly person.

Kim Kardashian defended the money side of this whole thing.

“If there is work that is really easy that doesn’t take away from our kids, that’s like a huge priority, if someone was faced with the same job opportunities, I think they would maybe consider," she said. "You’re going to get backlash for almost everything so as long as you like it or believe in it or it’s worth it financially, whatever your decision may be, as long as you’re OK with that.”

Jamil responded to all of this on Twitter. She said,

Essentially, 'f*ck the young, impressionable people, or those struggling with eating disorders, we want the money.' I have been given these same opportunities to flog this stuff, and I don’t do it, so they don’t have to. Thank you, next.

In another (more graphic) tweet, she said, "Their pockets are lined with the blood and diarrhea of teenage girls..." Cute.

But since then, in a shocking move, Khloé deleted her Flat Tummy Co. ad.

Now that Kardashian has deleted her ad, Jamil has posted about the small victory on Twitter.

"Oh look. Khloe deleted her diet shake post," she said. "There is hope after all..."

What do you think? Did Kardashian delete the post because Jamil's words finally struck a chord? Did Flat Tummy Co. ask her to delete it to stop the drama? Or was it really just about her aesthetic? Something tells me we won't be finding out about this on Keeping Up With The Kardashians. *Heavy sigh*.