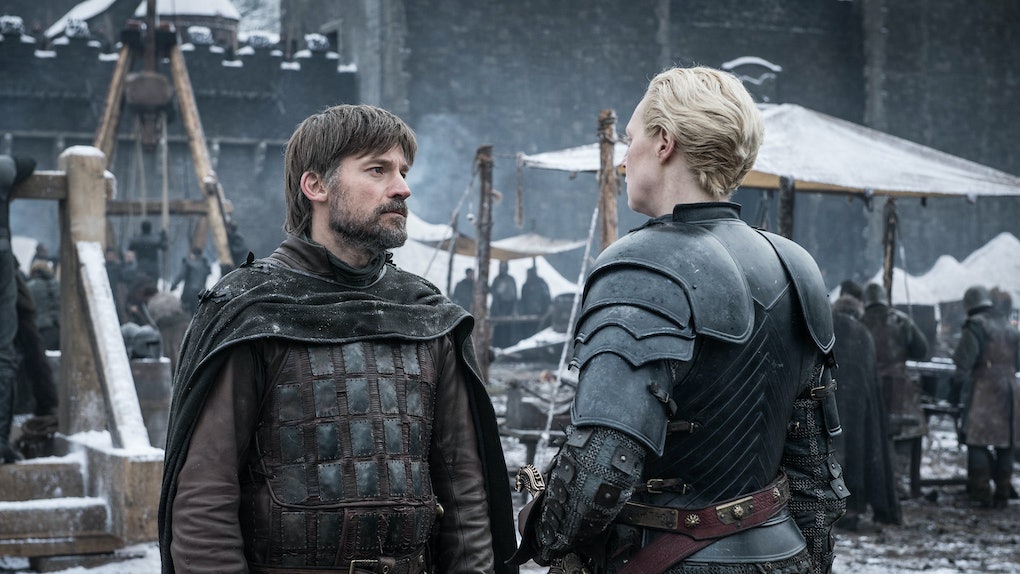 Nothing good can stay. That's the lesson Game of Thrones has been teaching viewers since the very beginning. When Brienne of Tarth was knighted by Jaime Lannister in the second episode of Season 8, "A Knight of the Seven Kingdoms," fans knew it was a bad sign of things to come. Most were convinced either she or Jaime (or both) would perish in the Battle of Winterfell. But in fact, they did not only survive, but they did so fighting side by side. Warning: Spoilers for Game of Thrones Season 8 follow. It seemed as if Jaime and Brienne were here to stay until Jaime went back to Cersei on Game of Thrones and changed everything.

Watching Brienne and Jaime fall into each other's arms after drinking way too much was the kind of moment fan 'ships are made of. Even better, Jaime raced after her to prevent Tormund from getting in there first. It was as romantic as Game of Thrones ever gets. After the knighting, the fighting, and the drinking, it was a wonderful way for their relationship to move to the next level.

But how long could it last? Jaime's face when he awoke the next morning suggested he had doubts.

But even so, Jaime seemed to have committed to his decision because he is an honorable man, and he's doing everything he can to be a good one, too. It's part of his turning over a new leaf. He decided not to risk temptation and didn't ride to King's Landing. Brienne would stay with Sansa Stark because that was her job. Therefore, Jaime would stay too, as a guest of the Lady of Winterfell, who was only too happy to keep a Lannister as a potential hostage should things go sideways, and let Brienne get laid in the process.

But things did go sideways, and quickly. Daenerys' arrival found her face-to-face with Euron's fleet waiting for her. He took down Rhaegal in the flash of an arrow. Missandei was captured. Daenerys was, once again, humiliated in a country that didn't love or respect her. Worse, when she came to treat with Cersei, instead of getting Missandei back, she had to watch as her best advisor was beheaded.

It speaks volumes that Jaime didn't even need to know that last part before his mind was made up. Just seeing Sansa's face when she told him Daenerys had lost a dragon was enough. Cersei would not be beheaded or executed in any type of manner for the public to watch. She would be burned where she sat, and the city with it, and everyone knew it.

Jaime lost his ability to pretend he wasn't siding with Cersei for the last time. Even though, as Brienne pointed out to him, it was hopeless. Though there was no way Jaime could save Cersei from herself, he was going. He would die in King's Landing at her side, as the horrible people they've always been, because that's the only way it could be. He left Brienne behind crying her heart out.

Nothing good can stay.

More like this
This 2021 'Game Of Thrones' Season 8 Trailer Is So Confusing... & So Good
By Ani Bundel
8 Theories About The 'Gossip Girl' Reboot That Simply Must Come True
By Rachel Varina
What Happened To The Waterfords In 'The Handmaid's Tale' Season 3? A Lot, TBH
By Ani Bundel
Stay up to date