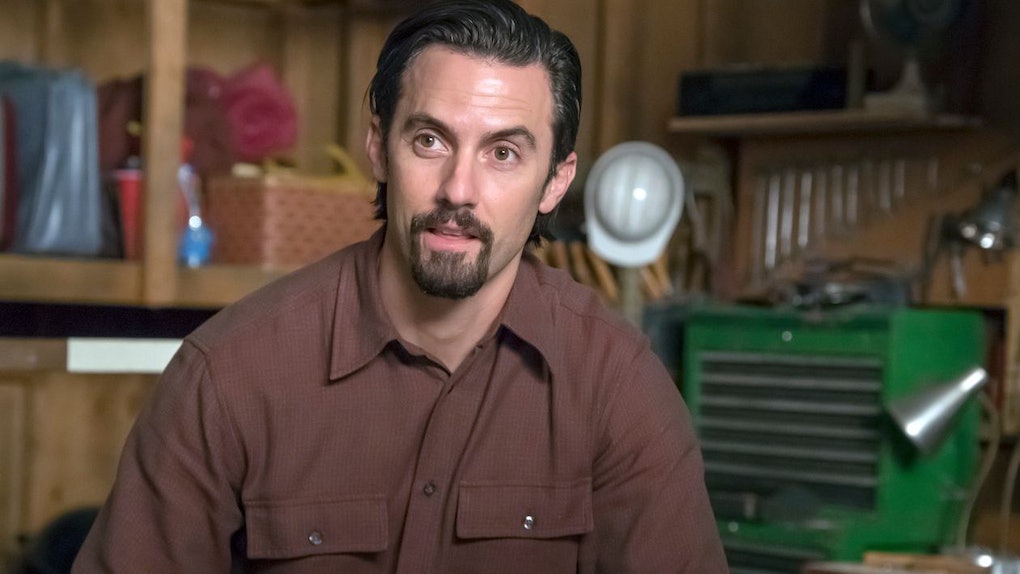 This Is Us is infamous for sneaking in little details that often only hit us after the fact. The most dedicated internet sleuths could probably produce a book on the tiny emotional subtleties in the episode "Super Bowl Sunday," but for now, all I care about is this particularly devastating moment that proves this show will destroy every fiber of my being eventually. Jack's death scene on This Is Us contained a blink-and-you-missed-it detail that, upon a rewatch, makes Rebecca's absence from his passing even more heartbreaking.

Several fans on Twitter have fervently studied the moment in which Rebecca left Jack's hospital room to make phone calls and get snacks. After she finalized hotel reservations for the family, oblivious to the fact that doctors were responding to Jack's "code blue" call behind her, Rebecca walked toward the vending machine for food.

Then, a faint whisper of a voice scarily resembling Jack's called out, "Bec?" Rebecca instinctively turned, but nothing was there. Seconds later, Jack's doctor appeared to break the bad news to her.

Say what you want about how Rebecca likely couldn't have heard Jack from his room, or go ahead and insist that Jack obviously wasn't capable of speaking then, but some fans have interpreted this blimp of a detail as Jack's goodbye to Rebecca. Papa Pearson always pulls through in some way or another, right?

I can only see this as one of those bizarre miracle moments where someone near death manages to send a message to a loved one somehow. There's no explanation of the voice in the episode, but present-day Rebecca did say that Jack managed to send her a special sign every year on the anniversary of his death. Whether or not the voice was a figment of her imagination, viewers could interpret it as the first of Jack's messages to her.

The quiet moment also fits the theory that, despite doctors' reassurance, Jack could sense that he was going to die. Some fans believe that he purposely sent Rebecca out of the room so she wouldn't have to witness his last moments. Seeing as Jack risked his life to save Louie and satisfy Kate, saving Rebecca from that intense experience sounds exactly like what he would do.

While Rebecca's reaction to Jack's dead body was gut-wrenching, imagine what memories she would still be dealing with today if she was in the room for his cardiac arrest, feeling completely helpless. Watching someone you love die, let alone a spouse, isn't something that you ever completely get over.

Even Milo Ventimiglia supported the idea that Jack knew what was coming, telling Entertainment Weekly:

He could probably sit there and have his wife in the room and all of that, but I deep-down think maybe he knew and he didn’t want her to have to see that or be around for that — I don’t know the real answer behind that, but I do feel like Jack knew something was wrong.

He also filled fans in on his understanding of the voice at the vending machine. Speaking to Esquire, he supported the idea that the voice was an otherworldly occurrence:

And if you caught this, when she’s at the vending machine, you hear Jack say “Bec?” I had recorded a lot of different versions of that, some that were a little more ethereal like I was whispering. You’ll have to ask Dan [Fogelman], but my belief is that it’s a presence. That was Jack saying “Bec?” She turns her head and everything.

Later in his interview with EW, Ventimiglia said, "Jack died as he lived — in service of his family." Jack clearly maintained this philosophy to the very end, even when he wasn't sure that sending Rebecca out of the room and making sure she laughed in their last conversation would save her from witnessing his death. It even fits how Rebecca viewed Jack throughout the following years, as he delivered his own messages to her even in death.

Following this sob fest, it looks like Tuesday's This Is Us episode will go back and forth between Jack's funeral service and an earlier family memory involving their car. Given how emotional that first part ought to be (Dr. K comes back to see Rebecca!), we'll need to see young and thriving Jack with the little kids more than ever before.

More like this
Ellen Pompeo's Response To Jesse Williams Leaving 'Grey's Anatomy' Is Emotional
By Cianna Garrison
John Legend's Quotes About Sharing The Details Of Baby Jack's Death Are About Community
By Sydney N. Sweeney
3 Theories About Jackson Avery's 'Grey's Anatomy' Ending That'll Wreck You
By Abby Monteil
Stay up to date