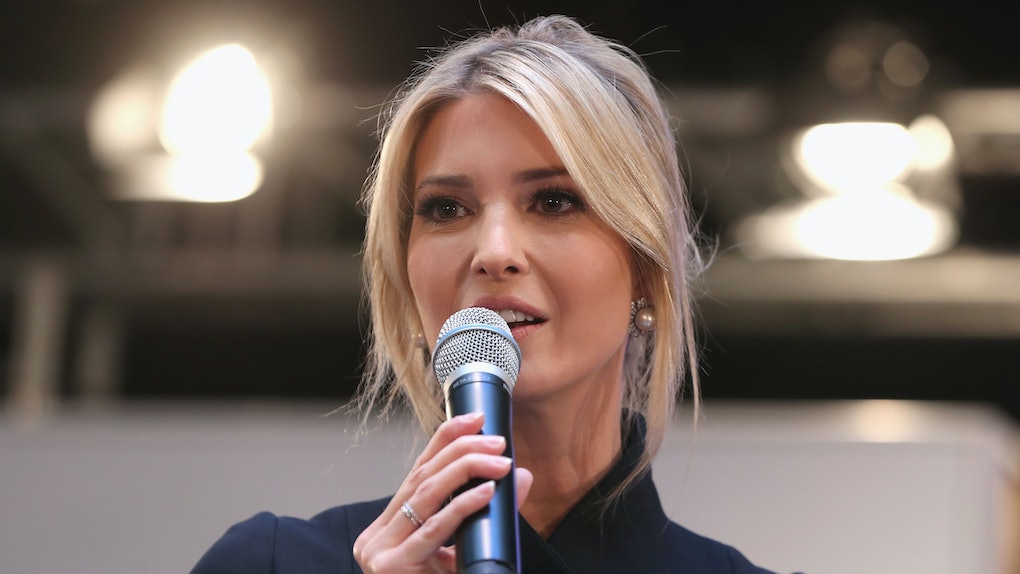 If a major breaking scandal fell in the woods, would Ivanka Trump hear it? The country just got a huge reading assignment because all (OK, most) of Special Counsel Robert Mueller's 400-plus-page report became public on Thursday, April 18. Sure, most of us are still busy tearing through the report, but apparently not everyone is as interested. Ivanka Trump's tweet after the Mueller report's release, for example, is not terribly interested in the thing that literally everyone else is talking about.

Trump herself is currently on a tour of nations in Africa to promote her Women’s Global Development and Prosperity initiative, visiting Ethiopia and Côte d'Ivoire as part of her push to support women in developing countries. So, she was out of Washington on the big day when the report finally dropped on Thursday, April 18.

While a lot of the report was redacted and so many of the pages were just completely blacked out, the first daughter's name did come up — 15 times, according to Intelligencer. The mentions included reference to the Trump Tower Moscow deal, which Trump has said she knew "literally almost nothing" about, according to ABC News. The report also claims that Trump and her husband Jared Kushner attended a "negative information" meeting about Hillary Clinton back in 2016, where the information allegedly came from Russian officials in Kyrgyzstan. Trump herself has not been accused of or charged with any crime. Elite Daily reached out to representatives for Trump for comment on the claims in Mueller's report, but did not immediately hear back.

But for what it's worth, the first daughter doesn't seem worried. In fact, her first tweet after the report dropped didn't even mention it — instead, at about 10:45 p.m. ET on Thursday night, she chose to tweet out a video of her visits with local women in Côte d'Ivoire, with a voiceover thanking them for their hospitality and some inspirational music. OK then.

The first daughter's lack of response to the Mueller report isn't all that surprising, as Trump has a habit of simply avoiding scandals or political drama that she doesn't want to be involved in. For example, when the country was in an uproar over deadly violence at a white nationalist rally in Charlottesville, Virginia in 2017, Trump and Kushner were vacationing in Vermont. And in the middle of the month-long government shutdown in late 2018 and early 2019, which resulted from a debate over her father's immigration policy and his insistence on a border wall, Trump and her family went to the family Mar-a-Lago resort in Florida. On social media, too, she's frequently silent amid scandals.

Which is not to say she hasn't weighed in at all. On March 24, Attorney General William Barr released a summary of the report, in which he wrote that "the investigation did not establish that members of the Trump campaign conspired or coordinated with the Russian government" during the 2016 presidential election. On the obstruction of justice matter, Barr wrote that special counsel did not come to a conclusion on whether President Trump obstructed justice, and the Department of Justice (DOJ) made the call that the investigation had not found "sufficient" evidence to prove that President Trump committed a crime. Ultimately, the president was not formally accused of nor charged with any crime. The DOJ did not respond to Elite Daily's request for comment about Barr's letter at the time. In response to Barr's note, on March 24 the eldest Trump daughter sent out a single tweet of an Abraham Lincoln quote that was powerful, but definitely understated. She wrote,

Truth is generally the best vindication against slander. — Abraham Lincoln

She wasn't the only Trump to respond, as President Donald Trump's tweet about the report was anything but understated. On April 18, the president went back to the Game of Thrones route and tweeted out an image of himself walking into the fog with a caption in the series' font scribbled across it. He wrote,

No collusion. No obstruction. For the haters and the radical left Democrats — Game Over.

I think it's pretty clear that Trump and he father have very different response styles, which is totally fine by me.