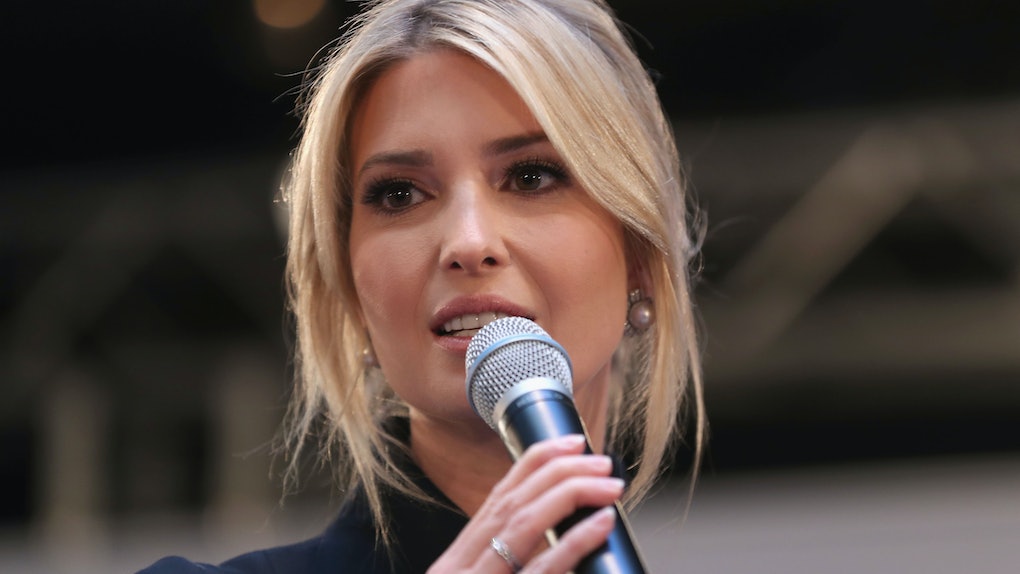 It's a news story that is, sadly, all too familiar. On Saturday, April 27, an armed gunman opened fire at the Chabad of Poway synagogue in Poway, California, killing one person and leaving multiple people injured. This shooting represents yet another act of violence against a Jewish religious community, and Ivanka Trump's response to the Poway Synagogue shooting pointed out that disturbing pattern.

On April 27, the residents of Poway were shaken when a gunman entered the Chabad of Poway and opened fire. According to reports from CNN, one person was killed and three were injured. According to Poway Mayor Steve Vaus, the shooting is likely to be considered a hate crime because of statements the gunman allegedly made when he entered the building. Following the attack, politicians and public figures shared their horror and dismay, including members of the president's family. On April 28, White House senior adviser Ivanka Trump took to Instagram to address the deadly shooting, and pointed out the disturbing pattern and timeliness of this act of violence. She noted both the fact that the shooting fell on the six-month anniversary of a previous shooting at a Jewish house of worship, as well as the fact that the attack came on the final day of the Passover holiday. She wrote,

Another vile act of anti-semitism and senseless violence committed at a place of worship, the Chabad of Poway synagogue, 6 months after the Tree of Life massacre & during both Shabbat & the last day of the Passover holiday. Prayers for all & gratitude for the off-duty border patrol agent who heroically intervened.

Trump herself is Jewish, having converted to the faith prior to her 2009 marriage to Jared Kushner.

Trump's comment referenced previous attacks on the Jewish community, highlighting what some have seen as a disturbing trend of anti-Semitism in the country. In October 2018, a gunman entered the Tree of Life synagogue in Pittsburgh, Pennsylvania, and opened fire into a crowd. The deadly fire resulted in 11 deaths and multiple injuries, according to CNN. On Oct. 29, 2018, just a day after the shooting, hate crime files were charged in response to the event due to the gunman's alleged anti-Semitic statements and reported targeting of the Jewish community on social media.

Trump also addressed the Tree of Life shooting on Oct. 27, 2018, via Twitter, stating that the United States is "stronger" than these acts of violence. She wrote,

America is stronger than the acts of a depraved bigot and anti-semite. All good Americans stand with the Jewish people to oppose acts of terror & share the horror, disgust & outrage over the massacre in Pittsburgh. We must unite against hatred & evil. God bless those affected

According to a 2017 Hate Crimes Statistics report from the Federal Bureau of Investigation (FBI), there were a reported 7,175 hate crime incidents that year. This is an increase from 2016, where there were 6,121 incidents. According to the 2017 FBI report, over 58 percent of the reported hate crimes were motivated by race and ethnicity bias and 22 percent were based on religious bias.

Both the Tree of Life and Chabad of Poway shootings have motivated people to speak out against anti-Semitism and find ways to help those affected. Following the Poway shooting, a GoFundMe has been set up as a way to assist victims and survivors and to "pay for for any necessary medical operations for the victims, funeral services, synagogue reparations or anything else the synagogue would need assistance with," according to the page. So far, the fundraiser has raised nearly $95,000 of the $180,000 goal.

While money always helps, it's not the only way you can reach out and make a difference. Want to lend a helping hand? Here's how.