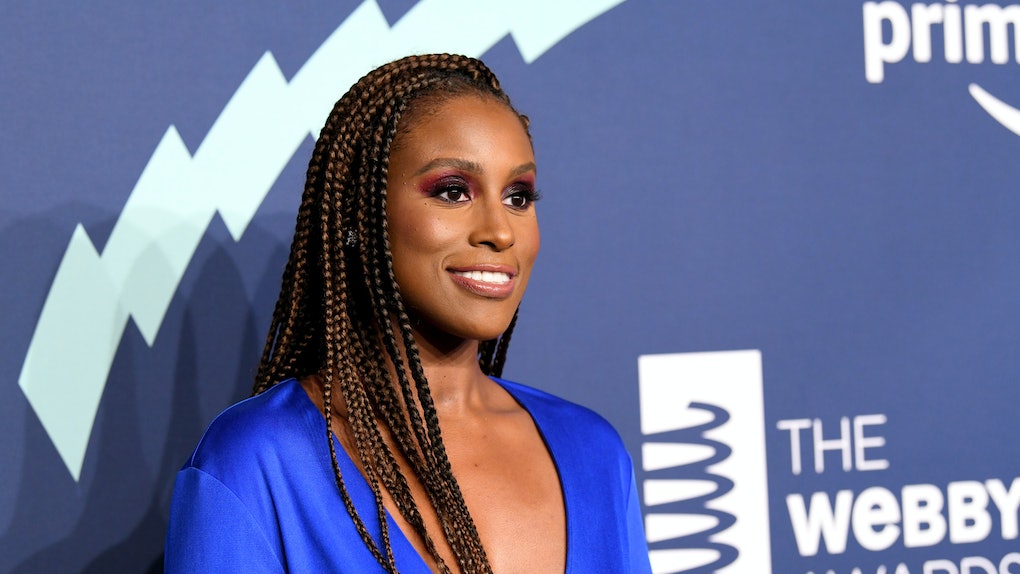 What's a girl got to do to make Issa Rae her best friend? She's hilarious, talented, down to earth, smart AF, and her teeth are so shiny I need sunglasses but it doesn't annoy me like with other celebrities. Her hit HBO series Insecure became a fast favorite when it hit the scene in 2016 and pushed Rae's successful career and visibility in the public eye to new heights. Today, many people look to Issa Rae's quotes on confidence as a source of inspiration and knowledge, and I've officially become one of them.

Tell me all of your secrets, Issa.

After combing the internet for some of Rae's best soundbites, one thing became clear. She isn't here to make people love her. She's here to do work that she loves. So often in life (and particularly in the entertainment industry, from what I understand), there is a pressure to prioritize accommodating those around you before putting your own authenticity first. Based on Rae's quotes below, however, that is a faulty-ass system, folks.

On where confidence truly comes from:

In 2018, Cosmopolitan shared a brief, but powerful, interview with Rae about inner confidence. According to Rae, "Confidence comes from knowing your sh*t is good."

Fair enough. That checks out.

Rae also touched on how confidence can vary in different aspects of your life, adding, "I’m for sure confident when it comes to work and trying to fulfill my dreams. Socially, the confidence has teetered, but that’s growing as I’m coming into who I am."

On the power of prioritizing what matters:

In 2017, Rae gave a powerful acceptance speech when she won the Star Power Award during the 2017 Black Girls Rock! Awards. She explained,

For a long time ... I defined myself by what I wasn’t, which constantly set me up for failure and disappointment. And, my life changed when I focused on what I was good at, what I liked most about myself and what made me stand out.

While promoting her film Little on The View with her co-star Marsai Martin, Rae was asked if she was considered 'cool' as a teen and if that time in her life inspired her writing for Insecure. Jokingly, Rae responded, "What do you think, girl?"

In September 2018, Glamour did a stellar feature on Rae where she touched on finding her feet in acting. The article explains it was obvious when she first started performing in high school that there was a major lack of diversity and representation for black women in the industry. "You learn that a very specific type is appreciated," she said. "For me, it was like, ‘If I want to pursue acting, I know that I am going to always have to be the best friend."

This is also the mindset she used to create Insecure. In 2017, Rae told Rollingstone, "In creating and writing the show, this is not for dudes. It’s not for white people. It’s the show that I imagined for my family and friends."

During an interview with GQ, Rae talked about what most performers live in fear of: bombing. It's usually a term used when referencing big movies or stand up comedians, and to Rae, it feels like a right of passage. As of May 2018 when the interview ran, she felt she had yet to "bomb" and has since been left with a lingering anxiety about if/when it's going to happen.

"In order to eventually succeed, you have to bomb," she said.

That's what every comedian says — that's when the fear goes away. And I feel like I'm still fearful because I haven't publicly bombed yet, in terms of my career. Yeah, Insecure is successful now, but where's my bomb coming? Where are my Will Smith bombs coming? Where, where is that happening?

On not caring what people call you:

Specifically, Issa Rae isn't worried about being labeled a b*tch. During an interview with Stephen Colbert, she explained how she "tends to be afraid of upsetting people." According to her, "That will get you nowhere." The best advice she ever received was "don't be afraid to be a b*tch." Later, Rae elaborated further to The New York Times, explaining:

That’s just not my way to operate, to be mean or to yell. But I sometimes get crippled by a fear of being labeled a b*tch. And it’s just like. That shouldn’t prevent you from speaking up if you really need to. And that’s the advice that I heed.

And now that you've said it, Issa, it's the advice I'll heed, too.

I think I'll just go ahead and copy and paste these quotes into a Google Doc and title it "Awesome Inspo When I Need It Most." Thanks, babe!

More like this
These Songs About Loving Yourself Need To Be On Your Playlist
By Michele Mendez
Here's Every BTS Video That's In The Bangtan Universe, So You Can Catch Up
By Michele Mendez
The Best Movie Soundtracks Were So Good, They'll Live On Forever
By Brandy Robidoux
Stay up to date