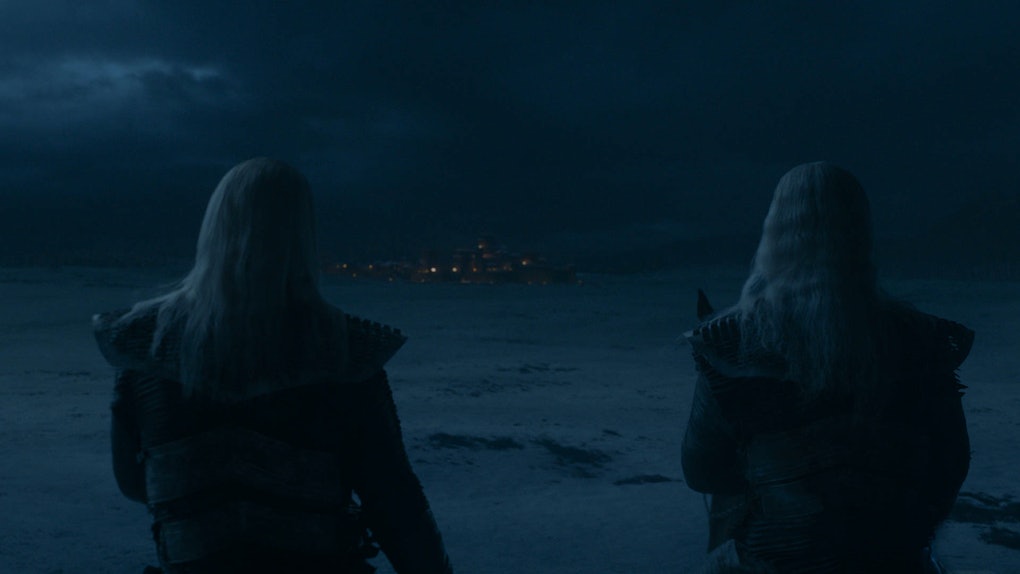 Is The Night King In Winterfell? 'Game Of Thrones' Fans Think He May Be Going Elsewhere

HBO should be patting itself on the back. Despite a few minor slips here and there, spoilers for Game of Thrones Season 8 have mostly stayed on lockdown. Few, if any, have a clear picture of what happens after this coming week when the series will air the largest battle ever staged on screen, either at the box office or TV. However, with no clues for what comes next, it leaves many possibilities open for what happens in the battle, including who lives, who dies and who shows up at all. Is the Night King in Winterfell? The assumption is yes, but some fans are not convinced.

Consider this: The Battle of Winterfell, which is sure to take out many players, is assumed to be the moment when the living face off with the dead, and someone comes out victorious. But what if that's not the case? There are three more feature-length episodes to follow. What if this giant battle is a red herring and the showdown between the Night King vs. Targaryen Dragon power doesn't happen?

That's the basis of a new theory making the rounds on Reddit this week. After all, at the end of "A Knight of the Seven Kingdoms" when the Night King's army pulls up outside Winterfell, their leader is nowhere to be seen. What if, like Cersei and the Sept in Season 6, he's not there because he has a different game in mind?

As the Reddit thread espousing this theory puts it, "The Night King is not stupid."

If you play out what the battle of Winterfell would be like in your head if the NK+Viserion would be there... it would be easy for Drogon/Rhaegal to take out the zombie dragon; it's 2v1 and wight's all can be killed by fire.. including Viserion. It would not be difficult to simply fly up to Viserion and breathe fire on him, and that would be that. THE NIGHT KING IS NOT STUPID, not enough to kamikaze his most powerful asset. - If you have a superweapon that you can't use against a particular target, then you find a different target.

That target? King's Landing, natch. After all, consider Bran's visions from Season 6:

[A] dragon shadow pass[es] over King's Landing. I believe the reason we are only shown a shadow was to not give away that it is actually the NK and Viserion, not Dany and her dragons.

This also gives the show a secondary reason to be sending Bronn north towards Winterfell. Whether or not he kills Jaime or Tyrion is beside the point, what matters is that he sees the Night King flying south. When he runs into those either victorious at Winterfell or heading south because they lost the battle, he can say: "Oh, a blue dude on a dragon? He went thataway."

It would undoubtedly be a massive twist if the Battle of Winterfell turned out not to be the showdown everyone was expecting. It also would explain why there are still three supersized episodes to go after it's over.