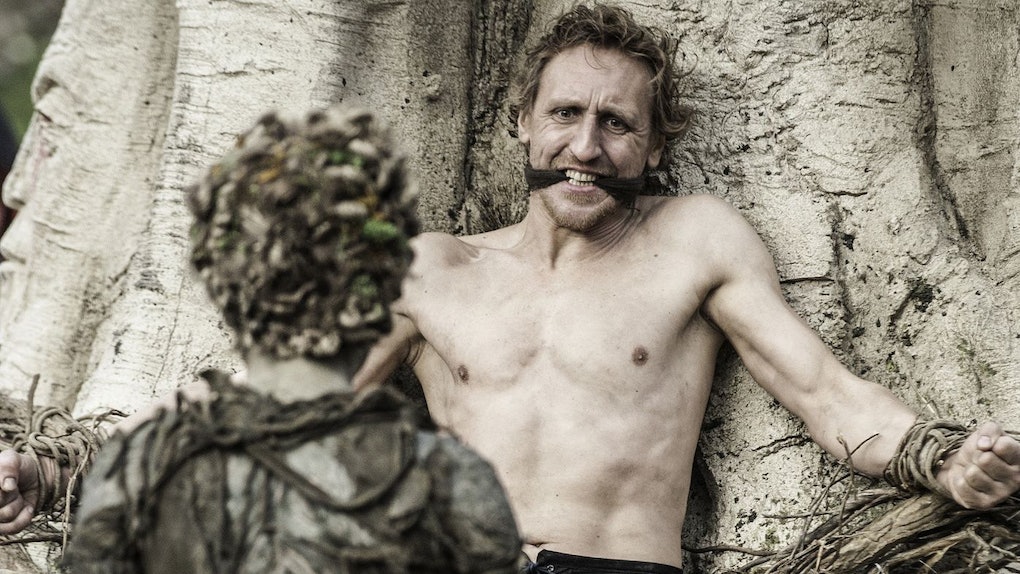 Is The Night King A Targaryen? Here's What We Know About A Possible Connection

Most of the mysteries in Game of Thrones have been cleared up going into the final season. Other than who lives and who dies (and who tells the story), most of the puzzle pieces have fallen into place. Jon Snow is really Aegon Targaryen, heir to the Iron Throne over Daenerys. Jaime has left Cersei. The Starks are reuniting in Winterfell. And the Night King is on his way. But who is the Night King really? Who is the man viewers saw turned into this monster? Is the Night King a Targaryen? How else could he master a dragon so quickly?

This is a not as an off-the-wall question as it first looks. After all, everything the show has taught fans about dragons boils down to "Targaryens are the ones who can control them." Drogon and Rhagael allowing Jon Snow to be near them was a big honking clue they sensed his Targaryen blood.

Now, Viserion is under the control of the Night King, and it happened very smoothly. Was it because the Night King raised him from the dead? Or is it because the man viewers saw in Season 6 get a piece of obsidian driven into his chest was a Targaryen? The man the Children of the Forest tied to the tree was pale and blonde.

The answer is no. Not just because the man in the video above is a darker blonde than most Targaryens. There is a much simpler reason given in the books. There were no Targaryens in Westeros.

According to The World of Ice and Fire, the First Men came to Westeros ~12,000 BC, via a land bridge connecting Dorne to Essos. They migrated north, coming into contact with the Children, the Giants, and other magical populations. The Children felt threatened by these lumbering brutes. The First Men were afraid of these small magical creatures. When the First Men began chopping down weir trees out of fear of being spied on, it was an act of war. It went on for years, with the Children losing badly. In a desperate move, they captured a man and turned him into a weapon of ice.

Across the Narrow Sea and far inland in Essos, the fires of Valyria were burning, but not yet birthing dragons. The dragon rider families wouldn't rise for 4,000 more years. The founding of the Valyrian Empire was concurrent with Westeros' recovery after the Long Night ~8,000 BC. The Targaryen dynasty rose with them, a minor house in a dragon-filled land, but one who would be smart enough to leave when the warnings of the Doom came.

In short, the math doesn't work for the Night King to have been a Targaryen. Dragon riders hadn't even risen in Essos during the war between the Children and the First Men, let alone found their way to the Westerosi continent. It would be thousands of years, and an Andal Conquest, before Aegon flew to the mainland on the back of his dragon.

Whoever the poor man was who the Children turned all those many moons ago, he was no dragon rider. The Night King's ability to ride now is all based in his power over Viserion after raising him from the dead.

Game of Thrones Season 8 will return to HBO sometime in the first half of 2019.

More like this
What Comes In The 'Euphoria' Book Box Set? Here's What To Expect
By Abby Monteil
Here's The Order To Read All The 'Shadow And Bone' Grishaverse Books In
By Abby Monteil
'House Of The Dragon': 'GOT' Spinoff Cast, Release Date, Filming News, & More
By Ani Bundel
Stay up to date