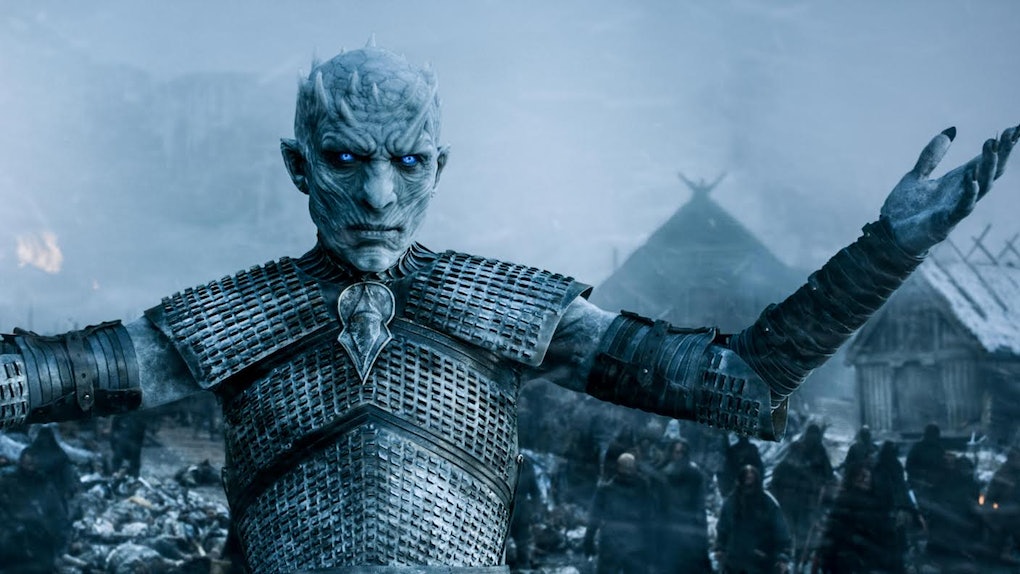 Is The Night King A Stark On 'Game Of Thrones'? It's A Long-Standing Theory

Game of Thrones Season 7 ended with the confirmation of how the final fight will set up. On the side of good, there is Jon Snow, Daenerys Targaryen, all the men they can muster, and their two dragons. On the side of evil, there is the Night King, his army of the dead, and his ice dragon. Moreover, this is a fight being lead by a Targaryens and Starks, as Jon's parentage has confirmed. But what family does the Night King come from? Is the Night King a Stark as well? This may seem far-fetched, but there is book-based evidence the Night King may very well be Jon Snow's distant relative.

In The World of Ice and Fire, there is a suggestion the Night King and the evils faced in the first Long Night were actually different characters. Whatever came 10,000 years ago was defeated, retreating with the few surviving wights and white walkers far to the North, where Brandon the Builder trapped them behind the Wall.

The Night King who leads the army today rose hundreds of years later. He was the 13th Lord Commander of the Night's Watch who was "turned" after "bedding a sorceress, pale as a corpse" with bright blue eyes. The Lord Commander declared himself king, and he and his corpse bride ruled the Wall from the Nightfort castle for 13 years.

As the situation continued to mount, and more of the Night Watch were turned to White Walkers, Brandon Stark, known as Brandon the Breaker, rode forth with an army to take down the Night King. It is rumored he managed it by teaming up with the wildings to the North and the King-Beyond-The-Wall Joramun, attacking the Nightfort Castle from both sides. Once again, the forces of evil were defeated and the Night King retreated.

But Brandon didn't just conquer the Nightfort and liberate the Night's Watch. He had every scrap of historical evidence as to who the Lord Commander was rounded up and destroyed. Westerosi historians suspect he did it to hide the Lord Commander had been a son of House Stark.

The Stark family made it their business to send family members to man the Wall since the beginning to solidify the relationship between the Night's Watch and Winterfell. That's the tradition Uncle Benjen is following when he becomes a ranger. The Starks, being highborn citizens with sword training, were far more likely to rise to Lord Commander, much like Jon Snow does. There's a good chance the Lord Commander was a Stark. It also explains why it took so long for Brandon to act.

As The World of Ice and Fire notes, the archmaesters of the Citadel dismiss all this as old wives tales. But considering what viewers saw of them in Season 7, it only makes it more likely to be true.

Will Jon Snow be facing his own kin across the battlefield? Truth be told, thousands of years have most likely leeched away any humanity the Night King had left. Jon shouldn't worry about this being any sort of kinslaying when it comes time to do the deed.

Game of Thrones Season 8 returns sometime in 2019 to HBO.