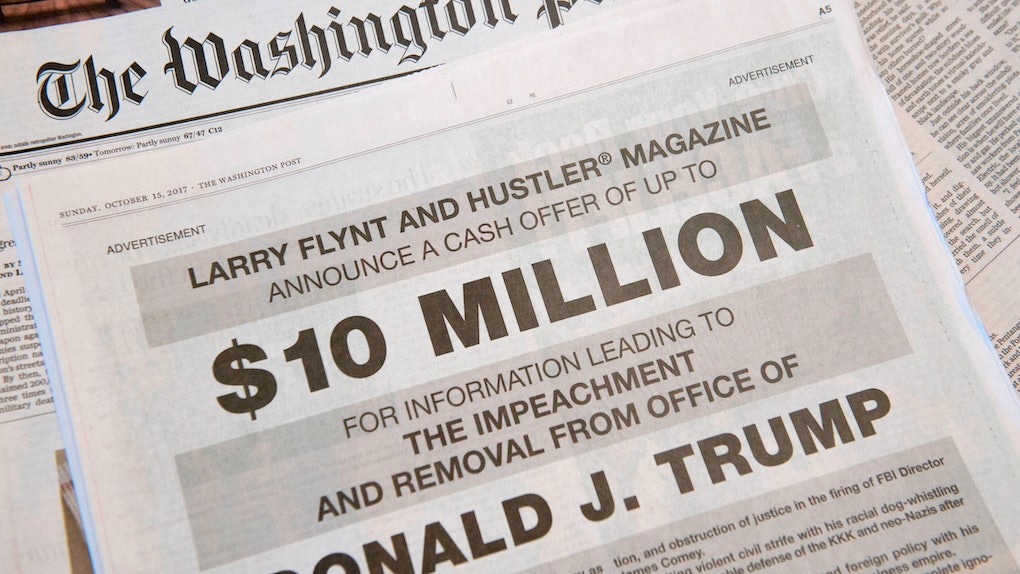 Is The Media Making Up Trump Stories? About Half Of America Thinks So, & That's Not Great

The feud between President Donald Trump and the media began before he was elected into office, and it has only gotten more tense since. A new report from Politico/Morning Consult revealed that 46 percent of Americans think the media is making up false stories about Trump to make him look bad. That number begs for a reevaluation of Trump's campaign tactics and the media's role in all of this.

"Fake news" is widely known as one of the president's favorite phrases, with Trump regularly dismissing publications such as The New York Times for their "bad coverage" and claiming news outlets such as ABC, CNN, NBC, and CBS feature "fiction writers." This kind of tumultuous relationship between the president and the press is unprecedented— and Americans don't know what to believe.

The 46 percent of polled American voters think that "the news media fabricate[s] news stories" about Trump and his administration. According to the Politico/Morning Consult report, 37 percent of those polled don't believe the media fabricates Trump stories, and the other 17 percent don't know which to believe. A less surprising statistic may be that 76 percent of Republicans believe that the media is fabricating stories, while a mere 11 percent do not. Additionally, 65 percent of Democrats do not.

"Voters, particularly Trump supporters, have become disenchanted with the national media," Morning Consult's Kyle Dropp said about the poll. "Even 20 percent of Democrats think that the national media fabricate stories on President Trump and his administration. That being said, many are still not willing to let the federal government censor the media."

What are we supposed to do with this information? If 51 percent of Americans believe that Trump is not honest, according to a September 2017 poll, why are they equally distrustful of what the media has to say about him?

To understand this, it's necessary to trace back to Trump's campaign tactics while running for president. Trump appealed to a blue collar middle-American group of voters that were overlooked and underrepresented in the media, and needed someone to fight for them. Trump saw a need and filled it. His campaign thrived off of fear: fear of terrorism at our doorstep, fear of immigrants, fear of the media, fear of Muslims, fear of "the other." Trump birthed a form of hysteria in the born-and-raised Americans to make them believe their home, the great United States of America, was at risk of being taken from them. And the only person that could fix it is Trump.

“He is a master at it to a degree that I haven't seen,” Barry Glassner, a sociologist at Lewis & Clark College and the author of The Culture of Fear, said. "His formula is very clean and uncomplicated: Be very, very afraid. And I am the cure.”

The skepticism of the media was a product of this thinking, and while some of these people have lost their hope in Trump, they have not yet found it again in the press.

It's also important to note that the media is not entirely blameless. The nonpartisan Center for Public Integrity found in 2016 that 480 journalists had given almost $400,000 in campaign money during the 2016 election, and 96 percent of it went to Clinton However, of those 480 journalists identified, most do not cover politics and were not covering the election at the time.

A 2016 Harvard study determined that Clinton and Trump an overwhelming amount of negative coverage on both sides. The author of the study, Thomas Patterson, wrote,

Negative news has partisan consequences. Given that journalists bash both sides, it might be thought the impact would be neutral. It’s not … If everything and everyone is portrayed negatively, there’s a leveling effect that opens the door to charlatans. The press historically has helped citizens recognize the difference between the earnest politician and the pretender. Today’s news coverage blurs the distinction.

According to the report, Trump was covered slightly more negatively than Clinton during the general election, with coverage being 77 percent negative to 23 percent positive compared to Clinton coverage running 64 percent negative to 36 percent positive coverage. The same report showed that Clinton's controversies, such as the email scandal, received 19 percent coverage compared to Trump's controversies at 15 percent.

Around the time of the election, it became increasingly hard to be objective and ignore the obvious facts about Trump, like his uncovered Access Hollywood video, claiming to "grab [women] by the p*ssy." Did some more left-leaning media anticipate Clinton to win based on polls? Most definitely. But does that mean the media was out to get Trump by making up stories? I don't think so. Clinton received "negative" coverage as did Trump, yet somehow Trump has made the media his enemy.

Trump recently suggested stripping NBC's broadcast licensing over a "fake news" story they broke about Secretary of State Rex Tillerson calling Trump a "moron," something Tillerson has still yet to deny explicitly. The Politico report found that 28 percent of those polled think the government should be able to revoke broadcast licenses of major news organizations if they fabricate news about Trump or his administration, while 51 percent don't think the government should be able to do that. 21 percent are undecided. Despite the opinions, the FCC rejected this suggestion because it is unlawful under the First Amendment. This shows that our country is so bewildered about the media, that almost half of Americans do not strongly believe in free press. In fact, 28 percent of those polled think the government should have some control over the press. Free press is a foundational part of democracy, so if Americans are unsure about that, we have to seriously look at how and why our country is divided on the very system that we stand on.