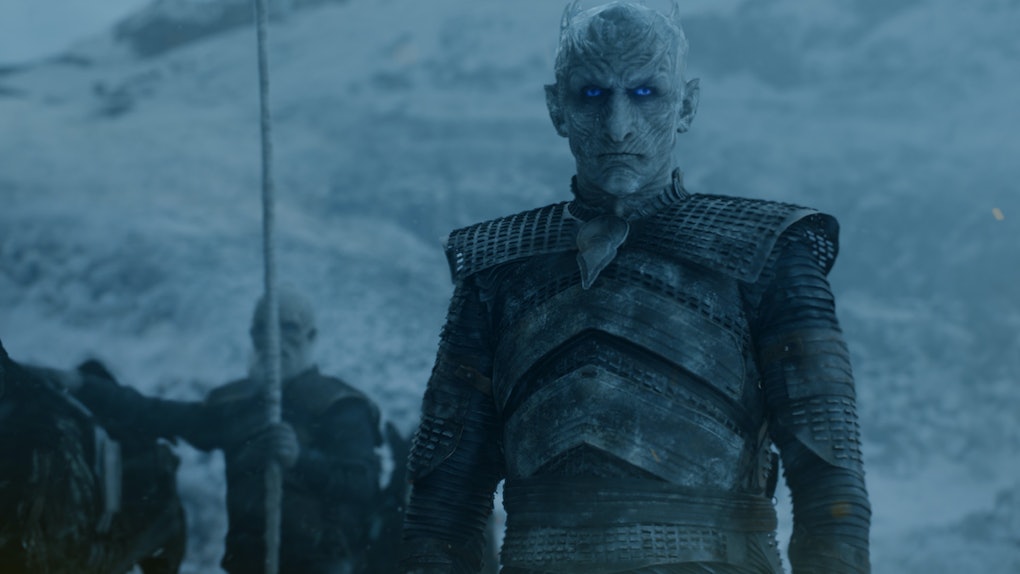 Is The 'Game Of Thrones' Spinoff About The Night King? Fans Are Left Wanting More

There are only a few episodes left before Game of Thrones is over forever. But all is not lost for fans of Westeros when the final curtain falls on the story of the Iron Throne. HBO currently has at least one prequel spinoff pilot in the works and is rumored to have at least one more on standby if necessary. Fans don't know much about the upcoming series, except that its set 10,000 years in the past, at the time of the first Long Night. Is the Game Of Thrones spinoff about the Night King? It could answer some burning questions about him anyway.

No one is sure how the prequel will handle the A Song Of Ice & Fire lore versus Game of Thrones story. When the show first premiered, it stuck to the novels, but Martin warned small alterations would grow into vast chasms over time. One of those seemingly insignificant changes was the names "White Walkers" and "wights," instead of the given name in the books, "Others" (this was due to Lost using the same term.)

In the books, the leader of the army in the first Long Night is called "The Great Other." The Night King was a completely different figure from Westerosi history, who the show re-appropriated to stand in for The Great Other since the production couldn't suddenly start using the "Others" name four seasons in when the character was introduced.

It's not clear how this discrepancy will be addressed in the new show. One would assume the reassignment of the Night King will stick. But David Benioff and Dan Weiss, who made that choice, aren't involved. Instead, the man who actually wrote the books, George R.R. Martin is. To him, the Night King isn't the leader of the White Walkers. It's actually "The Night's King," who was the 13th Lord Commander of the Night's Watch and came along generations after the Long Night. He was seduced by the leader of the Others, a woman with alabaster skin and glowing blue eyes. Under her spell, he attempted to find a way to cross the Wall. In the end, the Starks took an army and put him down.

This leaves a lot of questions for dealing with the Long Night in the upcoming prequel. Will "The Great Other" remain the Night King? "The Great Other" is never revealed to be a man or a woman, though the story of the real Night's King suggests perhaps it's the latter.

If the prequel sticks with the Night King and the scenes showing his creation by the Children of the Forest, does that mean there will be a great redefining of this very early Westerosi history? Will fans get to see previous incarnations of the Three-Eyed Raven as well? How about a White Walker Child of the Forest? (Has anyone noticed they don't seem to exist?)

There are many unanswered questions about the "Great Other" (or the "Night King," whichever you want to call him), in both the novels and the show. Anything the series gives viewers to help fill in the gaps will almost certainly be pored over and dissected when it lands.