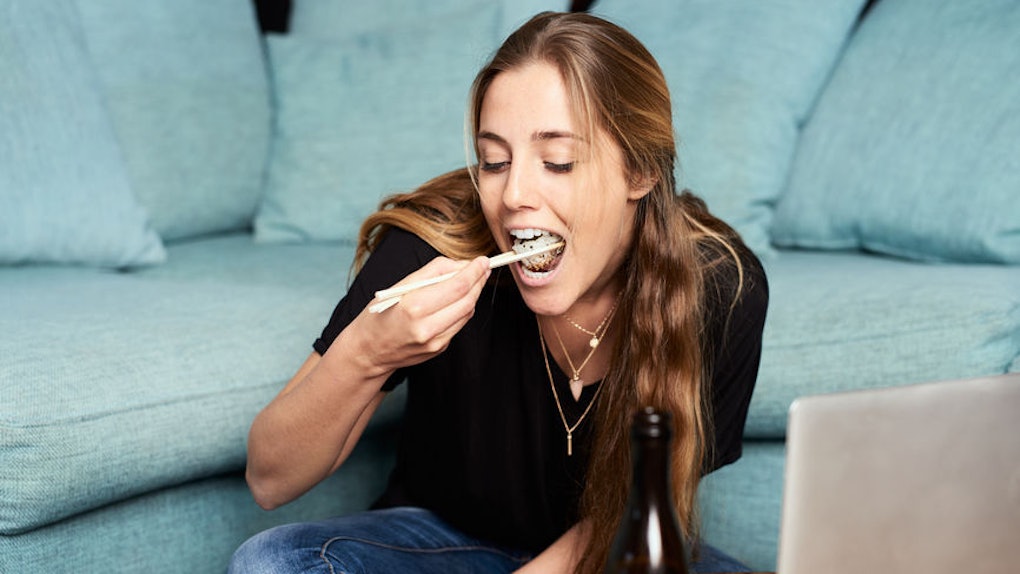 Is Soy Good For You? Dunking Your Sushi In The Stuff Could Benefit Your Bones, Science Says

If your go-to takeout meal is an avocado cucumber roll doused in packets on packets of soy sauce, you’re in luck: That bittersweet brown sauce you can't get enough of is swimming with nutritional benefits that might just make your body stronger in the long run. Granted, certain kinds of soy have a bad rap, but the fact is, anything processed isn’t great for you in large quantities. According to new research that has recently surfaced on the legume, though, soy is good for you in moderation, and the more you try to incorporate the stuff into your diet now, the stronger your bones will be once you hit menopause. I realize that part of your life is probably a long way off for most of you, but hey, it never hurts to be prepared, right?

I pretty much live by the notion that too much of anything is never a good thing, but when I first changed my diet from full-on omnivorous to primarily plant-based, I remember coming across a lot of chatter about the pros and (seemingly many) cons of soy. Debating this topic could be an entire article in and of itself, but before I get into the latest research, it's important to note that soy does contain a slew of good-for-you nutrients, according to Healthline, like manganese, potassium, magnesium, iron, calcium, vitamins K and B6, among others, and it’s also a wonderful source of plant protein. However, the health outlet notes, the nutritional value of soy fluctuates depending on the form it's in — tofu, tempeh, whole soy beans, etc. Therefore, in order to figure out what soy products are best for you and your health, and which ones you should avoid, I highly suggest doing your own research and/or speaking to your doctor. For now, let's talk about what is good about this tasty little legume.

To find out whether or not soy is good for you in any capacity, researchers from the University of Missouri performed an animal study that showed, when women add soy protein to their diet, they're less likely to experience things like osteoporosis, fragile bones, and poor metabolic health during menopause. Pamela Hinton and Victoria Vieira-Potter, professors of nutrition and exercise physiology and co-authors of the study, began the research by analyzing a group of lab rats, half of whom were given a soy-based diet, while the rest were assigned a corn-based regimen. After studying the different effects of those diets, the rats were then divided into two smaller groups: those with ovaries and those without, in order to “mimic effects of menopause,” ScienceDaily reports. From there, the researchers evaluated how a soy diet affected the rats' bone strength and metabolism compared to the corn-based, soy-free diet.

The results of Hinton and Vieira-Potter’s study have been published in the online research journal Bone Reports, and showed that the rats (including those with and without ovaries) that were fed soy protein had stronger tibia bones — aka one of two bones in the lower leg that supports your weight, knee, and ankle joints — as well as an improved metabolism. And while the authors said in a statement that there’s reason to believe soy can help women during menopause specifically, they also said these results suggest that adding more soy to your diet right now, regardless of where you’re at hormonally, can benefit your health:

Bottom line, this study showed that women might improve bone strength by adding some soy-based whole foods to their diet. Our findings suggest that women don't even need to eat as much soy as is found in typical Asian diets, but adding some tofu or other soy, for example foods found in vegetarian diets, could help strengthen bones.

So if you've been a little hesitant to eat more than a packet or so of soy sauce with your sushi every once in a while, maybe this research can persuade you to indulge in this form of plant-based protein a little more often. But this isn't to say you have the go-ahead to add soy sauce in particular to every meal you consume. I mean, I guess you could, if you're creative, but as much as you love the stuff, it's probably a good idea to consider fitting some other sources of soy protein into your diet.

For example, if you're a coffee drinker, swap whole milk lattes for soy. It definitely changes the taste, and it might be something you have to get used to, but swapping for soy and adding a little bit of vanilla flavoring is definitely a doable option once or twice a week. And if you love a good plate of eggs in the morning, you'll probably enjoy tofu scrambles, too. Just buy a block of firm tofu, crumble it into the pan, and liberally shake in some turmeric spice, as well as salt and pepper for taste. Trust me, if you get the seasoning just right, you'll hardly notice the difference.

Still, if the squishy texture of tofu freaks you out, try giving tempeh a taste. I personally like to cook mine over the stove and drown each and every piece in hot sauce. It tastes like chicken crumbles IMO, so you can easily mimic animal-protein-based wraps or just add it over greens.

As far as how much soy protein you should be eating, that's ultimately going to depend on your body. Talk to your doctor or nutritionist to figure out a meal plan that's best for you. In the meantime, enjoy that soy sauce to your heart's content.