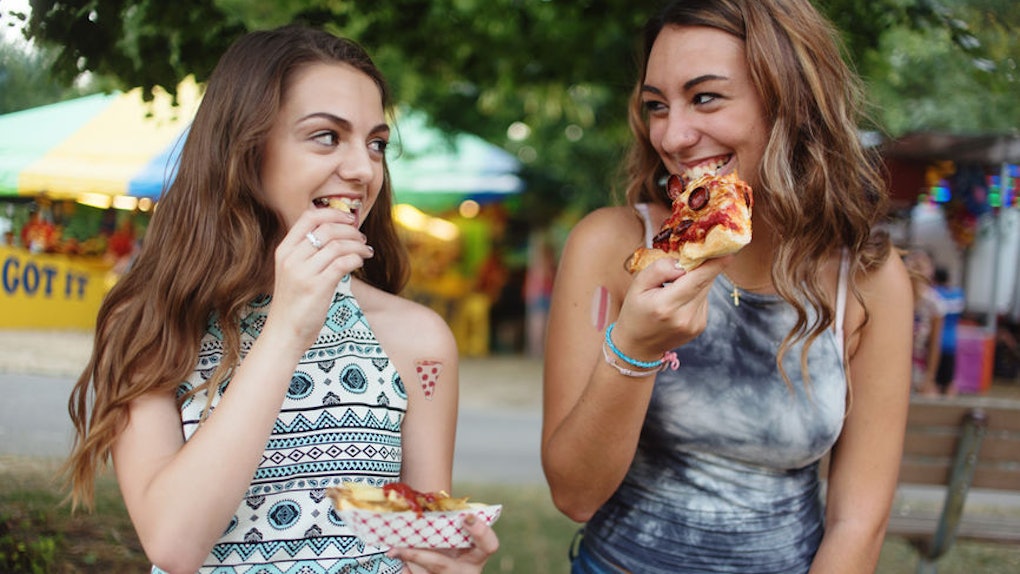 Is Salt Really That Bad For You? Science Says It’s Not Nearly As Unhealthy As You Think

Healthy food often gets a bad rap for being sugar-free, salt-free, fat-free, and pretty much happiness-free when you get right down to it. But does it have to be that way? If you're someone who could go to town on a bag of salty chips or swoons at the smell of French fries, then I think you could be my best friend. So is salt really that bad for you? According to a new study, you shouldn't be too worried about snacking on your favorite popcorn or potato chips, because the truth is, you probably aren't eating an unhealthy amount of sodium.

For the study, which has been published in the medical journal The Lancet, researchers looked at the eating habits of 94,000 people between 35 and 70 years old for an average of eight years, in communities from 18 different countries. According to ScienceDaily, the research found that the World Health Organization's original recommendation that people eat under two grams of salt per day is unnecessarily strict. In their study, the researchers found that sodium intake typically isn't correlated with an increased risk of heart disease and stroke until people consume over five grams of the stuff per day. Plus, the researchers concluded, as long as you're eating plenty of fruits and veggies on a regular basis, you're probably already eating a safe amount of salt, too, as only 5 percent of people in developed countries eat more than five grams of salt per day, the study found.

But what do five grams of salt actually look like IRL? Well, it's about two and a half teaspoons of the stuff. So technically, that means you could eat, say, 20 entire servings of Flamin' Hot Cheetos (hey, no judgment here) before reaching that five-gram threshold. Obviously there are probably some other drawbacks to eating quite that many Cheetos in one sitting, but hey, as far as the salt aspect goes, that's good news, right?

In even better news, the research published in The Lancet found that a healthy amount of salt is not only not bad for you, but it actually helps your body with some pretty important tasks. "In communities that consumed less than five grams of sodium a day, sodium consumption was inversely associated with myocardial infarction or heart attacks and total mortality, and no increase in stroke," Andrew Mente, first author of the study and a researcher from the Population Health Research Institute, explained in a statement. In other words, as long as you're aiming for those five grams of salt per day and making sure not to exceed that limit, these findings suggest that sodium may in fact lower your risk of things like heart disease or stroke, rather than increase it.

Now, despite how awesome it is that you can technically eat 20 servings of Cheetos in a day without exceeding that five-gram threshold, it's probably in your best interest to look for some slightly healthier salty foods to include in your diet. For instance, you could try salting some fresh watermelon — yes, seriously. Food developer Barb Stuckey, author of the book Taste What You’re Missing, told Huffington Post that there are "three taste elements of watermelon" (sour, sweet, and bitter), and when you salt the fruit, it can actually amp up the sweetness and dial down the bitterness, making the summer treat that much more delicious.

For another sweet and salty snack that won't harm your health, try whipping up Bon Appétit's cornbread muffins. The fluffy, buttery treats include fresh corn kernels, as well as unsalted butter, so you won't inadvertently get too close to the five-gram limit. But with a crumble of flaky sea salt sprinkled on top, these bad boys are sure to satisfy all of your salty cravings.