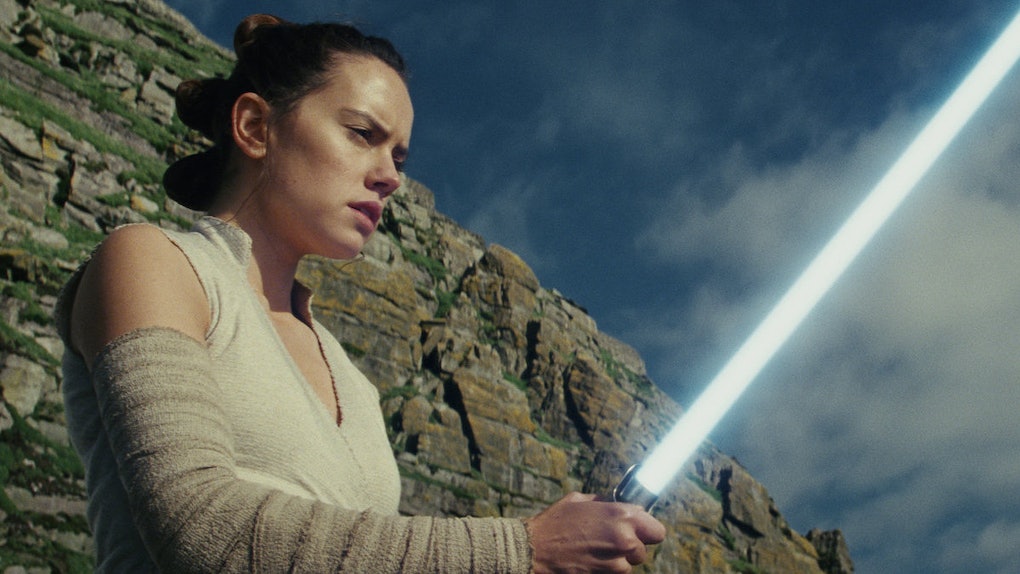 Is Rey A Gray Jedi? ‘Star Wars' Fans Have A Theory About 'The Last Jedi

Every Star Wars fan is waiting for The Last Jedi to tell us more information about the still-mysterious protagonist of the new iteration of the saga. After being introduced in The Force Awakens in 2015, so much about Rey is still an enigma to fans, but The Last Jedi promises to clarify everything about the new heroine. For instance, fans are already picking up on some clues about the type of Jedi that Rey might be. The consensus right now is that Rey will be revealed to be a Gray Jedi in Star Wars: The Last Jedi. So why do people think that, and what does it even mean?

First, let's define what a Gray Jedi is. Just like it sounds, the term refers to a Force user who walks the line between the light and the dark, or more specifically, can harness the power of the dark side without being corrupted by it. This ability makes Gray Jedis not exactly good or evil like most of the rest of the Star Wars universe, but more complicated, centrist figures. The most famous example of a Gray Jedi in Star Wars lore is Jolee Bindo, who trained as a Jedi Padawan before abandoning the Order to operate independently after gaining the ability to tap into the dark side of the Force without letting it control him. Qui-Gon Jinn was also considered a Gray Jedi by some members of the Order due to the fact that he often when against the Council's wishes.

There haven't been a lot of Gray Jedis in the past, but fans are convinced that Rey will be revealed to be one in The Last Jedi. The main thing that is fueling this theory is a teaser poster that Disney released ahead of the first Last Jedi trailer, which shows Rey holding up a lightsaber that is half Luke Skywalker's and half Kylo Ren's, standing in between the faces of the two men.

The implication is pretty self-explanatory: Rey is straddling the line between Luke Skywalker's tutelage on the side of good, and Kylo Ren's pull to the dark side. As we already know from the end of The Force Awakens, Rey will be training under Skywalker for a good chunk of The Last Jedi, but the new movie's trailer also hints at Rey forming an alliance with Kylo Ren. It sounds like The Last Jedi will focus predominantly on Rey struggling between the light and dark sides of the Force. Could that end with Rey realizing she can control the dark side while still remaining uncorrupted by it? It certainly seems like a major possibility. And also, like... this is obviously not as convincing as everything else, but Rey rhymes with Gray. That could have been a little hint the writers have been giving us all along.

The other big question about Rey that The Last Jedi promises to answer is who her parents are, which might also lead into the reveal that she is a Gray Jedi. Two of the frontrunners for Rey's father are Luke Skywalker and Han Solo, and if either is revealed to be her actual dad it could explain her draw to both the light and the dark side of the Force. If Luke is her father, then his influence would pull her to the light, but it would also mean that her grandfather is Darth Vader, one of the most powerful users of the dark side of the Force. If her parents wind up being Han Solo and Leia Organa, then Leia's use of the light side of the Force could pull her to good, but yet again, her grandfather would be Darth Vader. Oh, and that would also mean Kylo Ren is her brother, and an example of her family turning to the dark side.

Star Wars: The Last Jedi premieres in theaters on Dec. 15.

More like this
The 'Zola' Movie Trailer Will Have You Reliving The Iconic Twitter Story
By Dylan Kickham
Zendaya's Instagram About Voicing 'Space Jam: A New Legacy's Lola Bunny Is A Throwback
By Abby Monteil
Is Netflix Making A 'To All The Boys' Spinoff Series About Kitty? Here's The Tea
By Rachel Varina
Stay up to date