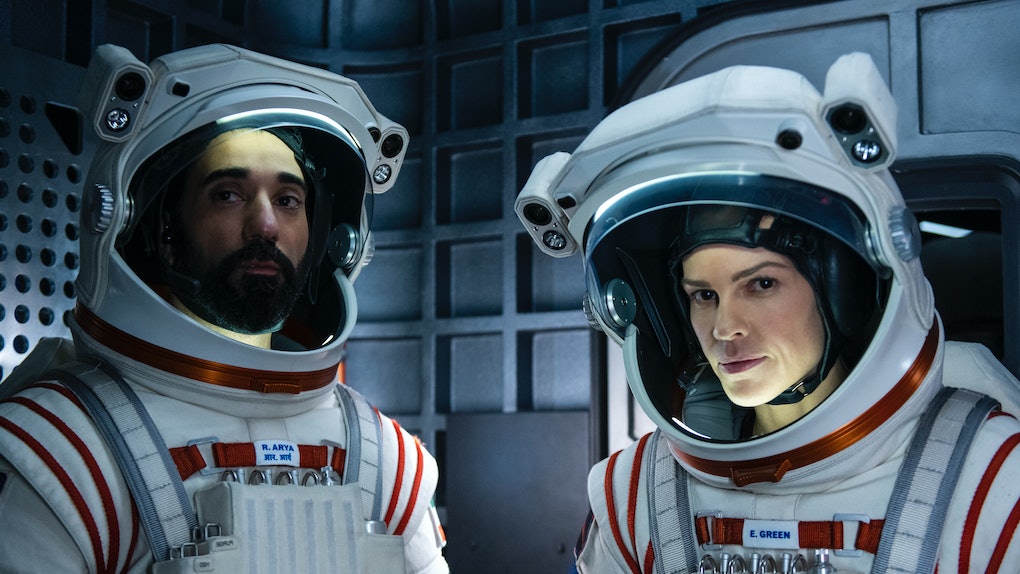 Is Netflix's 'Away' Based On A True Story? A Real Space Mission Inspired It

Some people dream of having a family, some dream of chasing the stars. If you're Hilary Swank's character in Netflix's new series, Away, however, you're dreaming both. The out-of-this-world show is full of twists, turns, and a million moments that will leave you sobbing directly into your dog's snout (just me?), all set against a history-altering space mission. After recovering from the endless shock of the first season, you're probably wondering if Netflix's Away is based on a true story. It turns out, the dramatic mission is a lot more fact than fiction.

The series follows fictional American astronaut Emma Green (Swank) as she leads the first manned mission to Mars. The three-year journey is carried out by a small international team of voyagers, each of whom are grappling with their own responsibilities and baggage. Emma serves as the commander of the ship, with a chemist, botanist, biologist, and engineer all on board the "Atlas." As she leads her team and travels the 45.697 million miles to Mars, she's also trying to be there for her teenage daughter and provide support to her newly injured husband, both of whom are still on Earth.

Needless to say, the stakes are high. And while there has yet to be a manned mission to Mars in reality, the foundation of the story is actually based on a very real, very intense voyage.

The series was inspired by NASA astronaut Scott Kelly's year-long expedition aboard the International Space Station that took place from 2015 to 2016. As the person who holds the American record for the single-longest mission, it checks out that he's had experiences no one has ever seen — not until Away, that is. Kelly's story was told to the world by writer Chris Jones as a feature for Esquire in 2014. Jones then went on to join the writing staff of the Netflix series. Jones' story was given to the writer of Away's pilot episode, Andrew Hinderaker, to pull inspiration from. The goal was to create a space-set show that was more about the emotion and less about the sci-fi of it all. And boy, does it do that.

If you've managed to get through all 10 episodes in one piece, you'll get a tiny look at what it's like to leave life behind on Earth, something every astronaut — and actor playing an astronaut— has to be prepared for. “That’s something you need to understand before you leave,” Kelly said in the Esquire article. “There’s no going home.” As seen in Netflix's mission to Mars, it's clear Kelly is absolutely right.

Away is streaming now on Netflix.

More like this
What Are The Eldritch Terrors In 'Chilling Adventures Of Sabrina'? They're No Joke
By Dylan Kickham
'Ginny & Georgia' Season 2: Release Date, Cast, Trailer, & More Info
By Dylan Kickham
These Movies & TV Shows Starring 'Shadow And Bone' Actors Are Far From Ravka
By Ani Bundel
Stay up to date