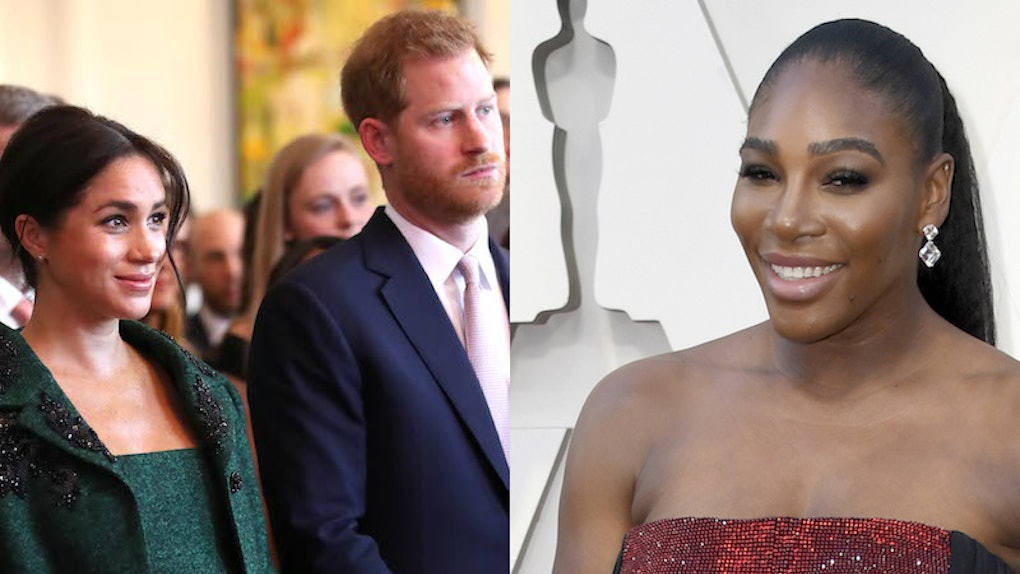 Is Meghan Markle Having A Girl? Serena Williams Opened Up About Her "Friend's" Pregnancy

Can you believe we're almost at the end of Meghan Markle and Prince Harry's pregnancy journey? From hearing Prince Harry gush about their baby to seeing all the sweet pics from Markle's baby shower, it's been a really amazing ride, and I'm honestly kinda sad to see it go. But there's one question many of us haven't been able to shake this whole time: Is Meghan Markle having a girl? Though the royal couple hasn't revealed the sex of their baby, one of her good friends seemed to in a new interview. Elite Daily previously reached out to Kensington Palace for comments on reports of the baby's sex, but did not hear back by the time of publication.

Serena Williams, who has been pals with Markle since around 2014, seemed to let the cat out of the bag in an April 3 interview with E! News. When giving advice to new mothers, the tennis star opened up about an unnamed, pregnant friend and referred to the baby as "she."

"Accept mistakes and don't expect to be perfect," Williams told the outlet, per Harper's Bazaar. She continued, "My friend is pregnant and she's like, 'Oh, my kid's gonna do this,' and I just looked at her and I was like, 'No, she's not.' I'm like, 'No, you're not.'" Elite Daily reached out to representatives for Williams for comment on whether Williams was referring to Markle, but did not hear back by the time of publication. Considering that Williams referenced Markle specifically at another point during her interview with E! when she said, "She will be the best mom, for sure," it sounds like Williams may have just blown up Markle's spot with a slight slip of the tongue.

So, is the newest little royal on the way going to be a girl? Previously, Markle said that she wanted to keep the sex of their baby a "surprise," per People. However, there are clues out there that suggest she's having a girl. At her baby shower back in February, for example, there was kind of a lot of pink going on, from the floral arrangements to the treats. Granted, there were other colors incorporated in the decor, but, c'mon. Look at the pics and tell me they're not suggestive?

While I'm sure the pair would be happy with either sex, it seems like they've really been hoping for a girl. Back in February, Markle told a fan that she really "like[d]" the name "Amy."

"That’s a really pretty name, I like it, we’ll have to think about it," the woman recalled Markle as saying, according to People.

But she also reportedly said in October of 2018 that they have a "long list" of names in general, so who knows. Elite Daily reached out to the Kensington Palace for confirmation on this report at the time, but did not hear back at the time publication.

Meanwhile, Prince Harry has suggested that he really wants his first child to be a girl, per People. During a cycling event at the Invictus Games back in October 2018, a fan yelled out to the royal that she hopes the baby “is a girl,” to which Harry appeared to respond, “So do I!”

Way to tug on my heartstrings.

We'll see any day now, as Markle's reported due date is some time between late April and early May. Elite Daily previously reached out to Kensington Palace for confirmation of those reports, but did not hear back. So keep your eyes peeled.