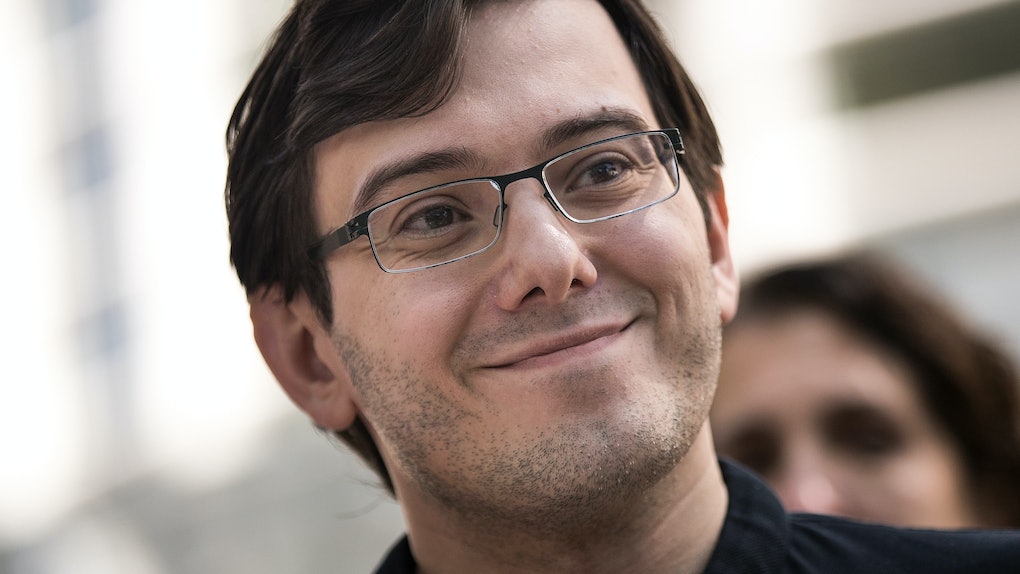 Is Martin Shkreli Going To Jail? His Sentencing Was Harsh

It looks like former pharmaceutical chief Martin Shkreli is going to jail after all. On Friday, March 9, Shkreli was sentenced to seven years in prison after being convicted of committing fraud. Shkreli's sentencing Friday was separate from other stunts that have brought his name into headlines.

The fraud conviction was unrelated to his widely condemned decision in 2015 to raise the price of an anti-parasite drug by a 5,000 percent margin. Instead, the sentencing comes after Shkreli was convicted in August regarding his involvement with another pharmaceutical company he'd created in 2011, Retrophin. The jury found the 34-year-old guilty on three of eight counts of misleading investors of two hedge funds he was heading, as well as conspiring to manipulate stocks for the company.

U.S. District Judge Kiyo Matsumoto delivered the sentence in Brooklyn, where Shkreli has been in jail since his $5 million bond was taken off the table in September, following the August conviction.

"The one person to blame for me being here today is me," Shkreli told Matsumoto prior to her announcing the decision, per CNBC. "Not the government. There is no conspiracy to take down Martin Shkreli."

Shkreli's lawyers, it seems, weren't anticipating that much prison time for their client, if at all. According to the Times, his defense attorneys had expected after the August conviction that Shkreli paying back his investors, thereby offsetting financial loss, would be enough to avoid a prison sentence.

While his lawyers were pushing for a sentence of 12 to 18 months, CNBC reports, the prosecution asked for a minimum of 15 years. And it wouldn't have been an unreasonable request; Matsumoto found that Shkreli's crimes has resulted in $10.4 million in losses.

Shkreli had already been ordered by the Judge Matsumoto on Monday to forfeit $7.36 million to the federal government as penalty in addition to his prison time. That would include giving up his $5-million stock account that was intended to be used for bail, plus his stake in Vyera Pharmaceuticals, previous known as Turing.

In addition, Matsumoto authorized the government to seize some of Shkreli's assets; among them a Picasso and a one-of-a-kind Wu-Tang Clan album valued at $2 million. On top of the asset seizures, Shkreli was slapped with a $75,000 fine, the Times reports, though it's hard to imagine he'll be feeling the burden given his net worth is $27 million.

Per the Times, Shkreli, speaking at the courthouse, said he wasn't motivated by money. "I wanted to grow my stature and my reputation," he reportedly said. "I am here because of my gross, stupid and negligent mistakes I made."

Reports from the sentencing hearing paints a colorful picture of the proceedings. "[S]hkreli is crying at his sentencing right now," wrote VICE reporter Allie Conti, who was apparently present, on Twitter. Shkreli's lawyer, according to Conti and the Times, said that while he sometimes wants to hug his client, "There are times I want to punch him in the face because he's made my job more difficult by some of the things he's said."

Shkreli's behavior outside of his business dealings played into the judge's decision to revoke his bail offer and place him in jail after he placed a bounty on someone's head. Via Facebook, he'd offered users a financial reward of $5,000 for acquiring samples of Hillary Clinton's hair on her book tour.

At the sentencing, per Conti, the judge also allegedly mentioned Lauren Duca, the female journalist whom Shkreli had routinely abused online, resulting in his suspension from Twitter in January 2017.

Per CNBC, Shkreli says that his time behind bars has changed him. "The trial and the six months in a maximum security prison has been a frightening wake-up call," he wrote in a letter from jail. "I understand how I need to change."

He plans to appeal the conviction, CNBC reports.