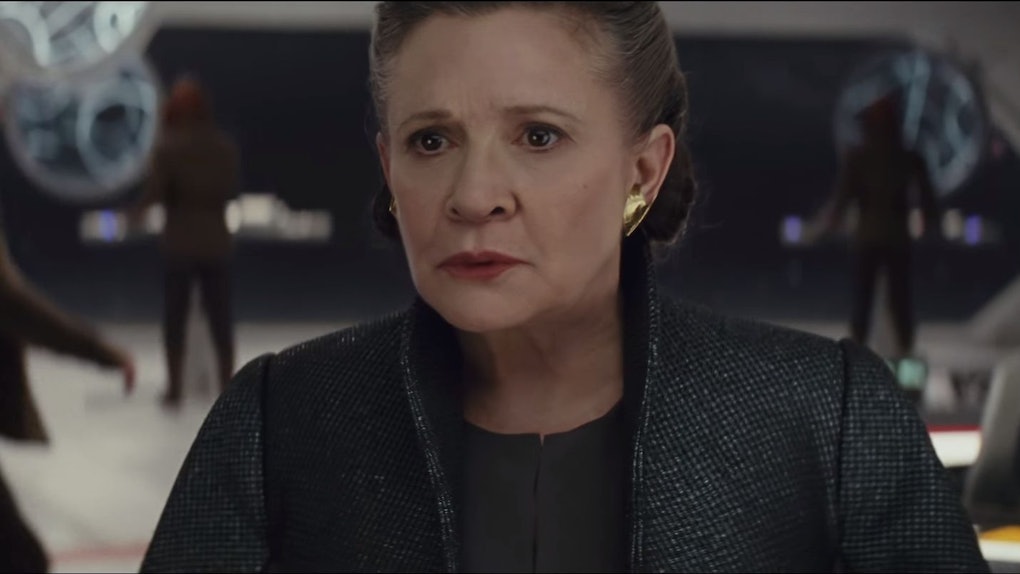 Is Leia In 'Star Wars Episode IX'? Here's What We Know

It was just under a year ago today that the news broke: Carrie Fisher had stopped breathing on a flight to Los Angeles from London. Four days later, she was pronounced dead. The woman who portrayed General Leia Skywalker Organa Solo would not see The Last Jedi arrive in theaters, or finish out the final trilogy. Fans were stunned and heartbroken. But while Fisher had all but finished filming for Episode VIII, what about the final movie? Is Leia in Star Wars: Episode IX?

Lucasfilm has been proactive in their assurances to fans over Fisher's role in Star Wars: The Last Jedi. Even though it's been almost a year since she passed, the way these movies work, she had already filmed most of the footage needed. Fans were promised there would be no "digitally" added Leia, and the movie would not be altered due to the circumstances. They followed this up by making sure to have a memorial for her at all their events this year to honor her memory.

But what about the final movie? The rumors ran rampant. Some reported she would be digitally inserted into the film, much like Peter Cushing's Grand Moff Tarkin was into Rogue One, despite the actor being dead for two decades and counting. But Kathleen Kennedy, head of Lucasfilm at Disney, refuted these stories: Digitally-added Leia was out of the question.

So, what is the plan for Leia in the final movie? If The Last Jedi was not altered to have her die, as claimed, that means that most likely there will be a funeral of some kind in Episode IX, no? And fans could rely on Star Wars to handle her passing respectfully, right? After all, the director and writer of Episode IX promised they would.

Except, that director and writer, Colin Trevorrow, was fired from the movie last September for turning in a script that was apparently unsalvageable, even after the playwright from Harry Potter and the Cursed Child was brought in to work on it.

Everything you've heard and everything you think you know about the final movie went out the window last September when Trevorrow was canned. Once Lucasfilm hired back J.J. Abrams to write and direct Star Wars: Episode IX and pushed back to the fallback release date of December 2019 instead of May in order to give him more time, the slate was wiped.

Abrams most likely has a basic outline to the story that the script will follow, with plot points for Rey, Kylo Ren, Finn and Luke. But as to how the script will go, that's being rewritten from scratch. Anything you heard about this somehow being "Leia's movie" has been rendered moot. Anything you heard about how Leia's death will be handled: also moot.

Here's what we know: nothing.

Here's what we can hope for: Kathleen Kennedy, who has managed to steer this ship into profit margins so high that Disney has already made back $3 of the $4 billion they paid for the franchise, will continue to do right by fans. We hope that she and Abrams will recognize that it is important that we receive closure for Leia's passing, and that however Star Wars: Episode IX opens, it does so with an acknowledgement that we lost her before it could be made.

Whatever form that takes, be it a funeral, or perhaps a visit to her grave next to Han's, we hope it is recognized that she was one of the early heroes of female fans across the galaxy. But in truth, until J.J. Abrams starts work on Episode IX next year, it could be anything. We'll have to wait and see.

More like this
Here's How To Stream 'Nomadland' So You Can Finally Get The Hype
By Rachel Varina
Here's How To Watch 'Promising Young Woman' For Free If You're A College Student
By Ani Bundel
What's Coming To Netflix In May 2021? Lots Of Action & Drama
By Ani Bundel
Stay up to date