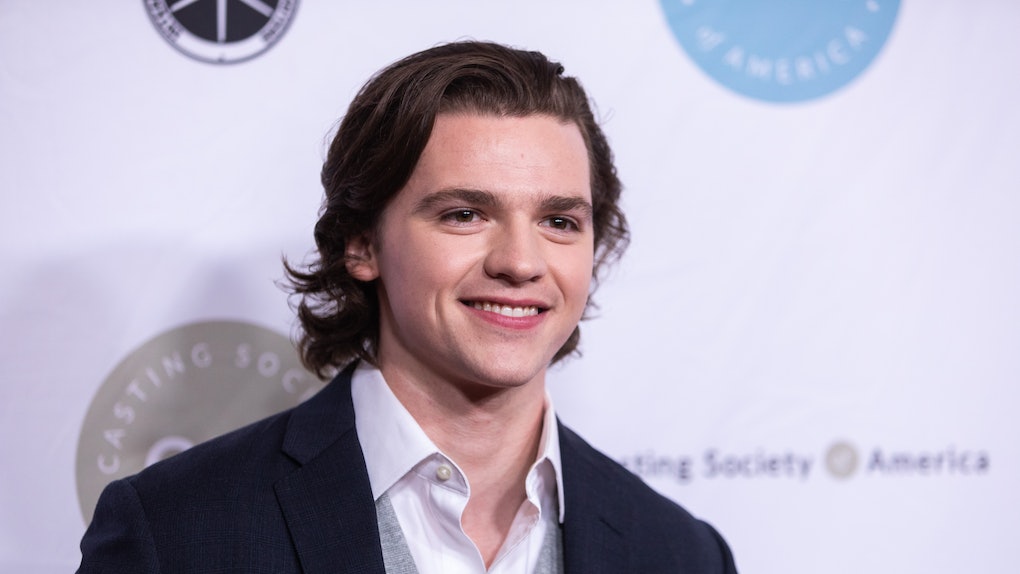 For those who've been crushing The Kissing Booth's Lee Flynn and wondering whether Joel Courtney is single, I have some bad news: He's taken. In fact, the actor has been engaged since Feb. 2020, so he's super taken. On Valentine's Day 2020, Courtney proposed to his longtime girlfriend, Mia Scholink, and he later shared the exciting news on Instagram. "I like it, so I just had to go and put a ring on it," he quipped, while Scholink captioned her own IG post, "ENGAGED to my best friend!!! Can't wait to marry you @joel_courtney." Cute alert!

The couple seemingly started dating in May 2017, according to an Instagram posted by Courtney on Thanksgiving that year. "Over the last 6 months the word 'thankful' has a new and far more deep meaning thanks to you @miascholink and today we got to celebrate that together for the first time ever," he wrote alongside a cute couple's pic. They've since shown each other lots of social media love, and Scholink even accompanied her now-fiancé to the premiere of To All the Boys: P.S. I Still Love You on Feb. 3, right before getting engaged. The best part: Just like The Kissing Booth's Lee Flynn and Elle Evans, Courtney and Scholink were childhood friends.

In May 2018, Scholink took to Insta to share a picture from the premiere of F the Prom, as well as a sweet childhood pic in which both she and Courtney are tagged. Though the post doesn't have a caption, it's pretty clear the two transitioned from friends to lovers, and I love this journey for them. Courtney and Scholink both grew up in Monterey, California, and though Courtney's family later moved to Moscow, Idaho, he was likely reunited with Scholink when he eventually relocated to Los Angeles. The two seemingly remained friends for years until finally becoming more-than-friends in 2017.

Though Courtney has never spoken about his fiancée in interviews, I know from her IG profile that Scholink graduated from Arizona State University in 2015 and went on to work at Beautycounter, a skin care and cosmetic company. The two now live in California together, and I can't wait to see what happens next for these love birds.