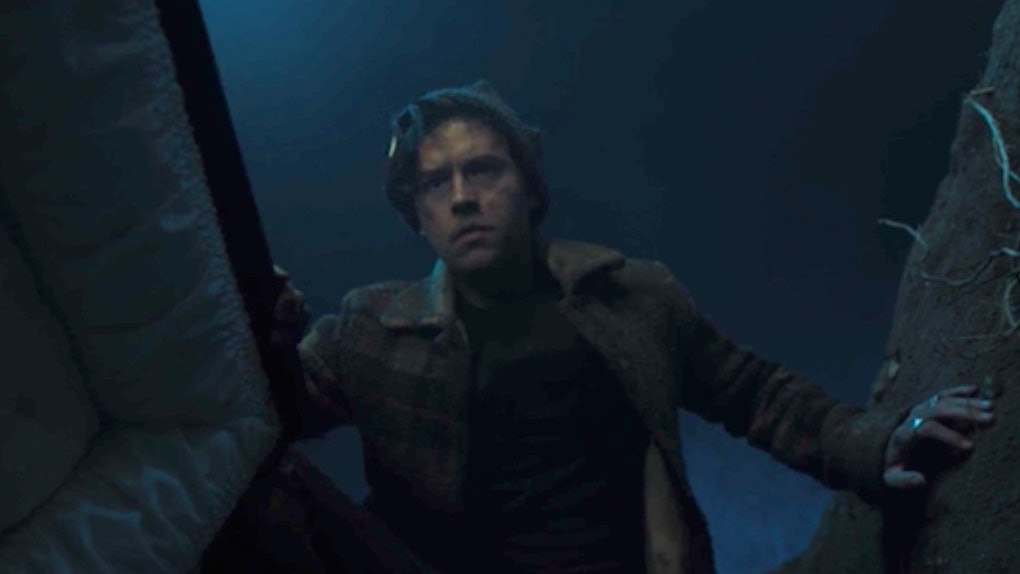 Is Jason Blossom The Gargoyle King? 'Riverdale' Just Delivered A Twist Nobody Was Expecting

The entirety of Riverdale Season 3 has revolved around the mystery of who could be under the Gargoyle King's mask, and the season's penultimate episode just finally revealed the truth. Heading into the Season 3 finale, this Wednesday's latest episode finally answered all of the major questions that have been plaguing Riverdale fans for the past 20 episodes. Spoiler alert: This post contains spoilers from Riverdale Season 3 Episode 21, "The Dark Secret of Harvest House." Now, everyone is asking the same question: is Jason Blossom the Gargoyle King really, and if so, then how is that possible?

As a reminder, this season of Riverdale has already included a number of false Gargoyle King reveals. First, Tall Boy was revealed to be the Gargoyle King as a means to help Hiram Lodge with his drug empire, and then Moose's father pretended to be the Gargoyle King in an attempt to scare his son straight. But despite these imposters, the identity of actual Gargoyle King — the person leading a deadly cult closely associated with the tabletop game Gryphons and Gargoyles — has remained a mystery... until the bombshell reveal at the end of this week's new episode.

After Jughead saves Ethel Muggs from the Black Hood, she tells Jughead that the Gargoyle King is actually Jason Blossom. That's right — Cheryl Blossom's twin brother who was killed all the way back in Season 1. Obviously, Jughead has trouble believing this, so he sets off to dig up Jason's grave. Sure enough, Jason's coffin is empty, implying that he really did fake his death somehow and has been operating as the Gargoyle King this whole season.

This reveal leads to two big questions: How is this even possible, and why would Jason want to become the Gargoyle King? To try to figure out the first question, let's quickly recap Jason Blossom's story from Season 1. At the beginning of the series, Jason concocted a plan with Cheryl to fake his own death in Sweetwater River so that he could run away from Riverdale with his pregnant girlfriend Polly Cooper. But soon afterwards, Jason's corpse was discovered near the river with a bullet wound in his forehead, and an autopsy revealed he was killed a week after his faked death. At the end of the season, we found out that FP Jones and the Serpents had kidnapped Jason to blackmail Cliff Blossom, but instead of pay the Serpents, Cliff shot his own son and then killed himself as well.

This all makes it very difficult to explain how Jason Blossom could possibly still be alive, especially since we saw him getting shot in a surveillance video, saw his corpse with a bullet wound in his forehead, and also saw that his body was autopsied. Still, Jason does fit all of the Gargoyle King's descriptors. In the previous episode, a tattoo artist told Betty and Jughead that he gave Gargoyle King tattoos to a man last year who had blue eyes, sandy hair, and was charismatic. Jason has blue eyes, was always described as charismatic as the leader of Riverdale High's football and water polo teams, and although the sandy hair description seemed to indicate a blonde, it could also fit for Jason's light red hair. On top of that, Cheryl has said that she is able to see Jason at The Farm.

Thankfully, next week's episode is the season finale, which means we should get answers on how Jason Blossom is alive and why he became the Gargoyle King... because I honestly cannot come up with any feasible explanations right now.