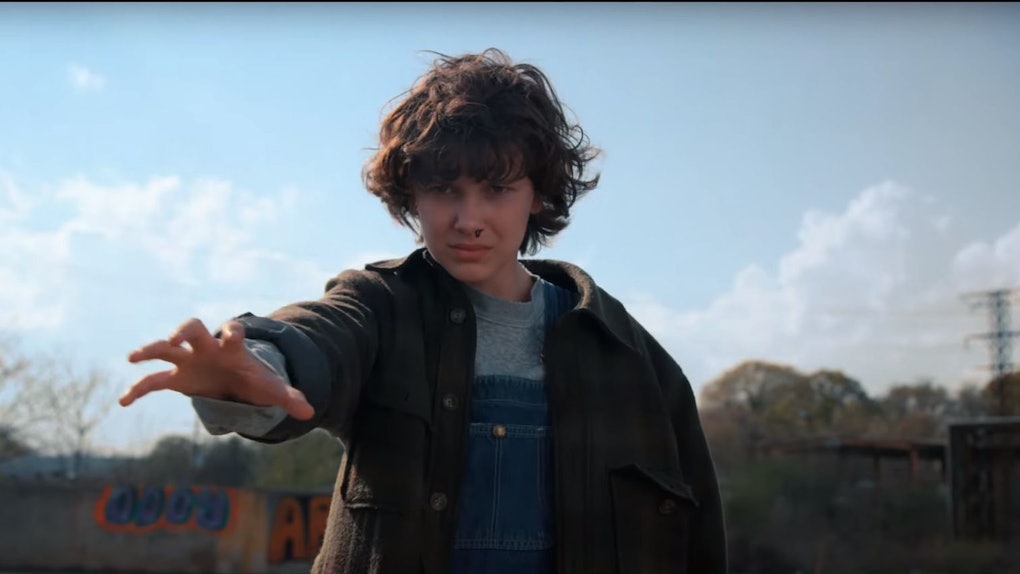 Is Hopper Eleven's Dad On 'Stranger Things'? 2 Theories That Prove He Just Might Be

Stranger Things might present itself as a tale of horror and mystery, where the walls between dimensions are shattered. But that's not the only reason it resonates with fans. It's also a tale of tragedy, of living on the poverty line in Reagan's America in the Midwest, at a time when the Cold War seemed never ending. Two of the saddest stories are that of Chief Hopper and the child Eleven, both of whom have lost their family. Perhaps that's why fans continue to hope that maybe Hopper is Eleven's dad on Stranger Things.

To be honest, it's a huge stretch. Eleven is the daughter of a woman who, out of a desperation for money, took part in clinical trials that affected her unborn child. Hopper is a man who lost his family when his daughter died of cancer at a tender age, bankrupting him, driving him to drink, and causing his wife to leave.

But the emphasis on the lost daughter, and then knowledge that scientists and doctors lie about the whereabouts, and health of children, like they did to Eleven's mother, Terry Ives, makes conspiracy theorists of us all. Could Eleven and Hopper be related? Could bringing them together give the two of them the happy ending we want for them?

Theory One: Eleven Is Hopper's Kid

This one comes from Planet Calvin, but it's a popular enough one that it caught on very quickly. Watch the whole thing above to see what you think. Even though I personally don't ascribe to it, I think he picked up on a lot of small details that will prove relevant in the coming Season 2.

Is Hopper delusional? Are the memories of Sarah's death from cancer all in his mind as a way to cope? I admit, I didn't catch the "the phone doesn't work because it was tapped" versus, "Hopper is suddenly on the phone with his ex-wife" later in the same scene. I suppose I just assumed he'd plugged it back in too. I also missed the Terry Ives newspaper was in that scene. Maybe these are just coincidences. But maybe, just maybe, they're not.

Theory Two: Sarah Is One Of The Other Numbers

This one is based on the mystery that's been sitting in plain sight of everyone, and yet no one talks about. This child, Jane Ives, or whoever she really is, only knows her name to be "Eleven." That's because the only thing she's ever been called is the "011" tattooed on her arm.

But numbering systems don't start with "011." If she's child number "011," that means there had to at least have been an "001" thru an "010" who somehow came before Eleven, or along side her, perhaps unbeknownst to her. Who were they? What happened to them? Did they to open doors to other worlds, and get lost in their own Upside Downs? Or maybe they got lost in *the* Upside Down, before Eleven came along? (Think of all those children's bodies who were trapped in the goo with Will Byers when Hopper and Joyce went to find him.)

Or did they die from not being able to sustain the telekinesis?

So let's once again look at the video above in Theory One. Let's consider that all these clues are there, that Sarah didn't die of cancer. But Sarah, in Hopper's memory, doesn't look a damn thing like Eleven. And she wasn't taken at birth, but a few years later. Did they do terrible things to her? Did she die instead alone in a solitary confinement room?

Maybe Sarah didn't die in the hospital, but in the lab. Maybe she was taken by these crazy scientists. If so, that would, spiritually at least, make Sarah one of Eleven's sisters, and Hopper Eleven's spiritual Uncle.

The kind of Uncle who, a year after the events of November 1983, is still leaving her Eggo waffles in the woods.

Stranger Things Season 2 hits Netflix on Oct. 27, maybe we'll get our answers then.

More like this
These Tweets About Regé-Jean Page Leaving 'Bridgerton' Are Royal Bummers
By Cianna Garrison
Netflix Renewed 'Bridgerton' For Seasons 3 & 4, Likely With More To Come
By Ani Bundel
Kyla-Drew On 'Dad Stop Embarrassing Me!', College Life, & Michelle Obama
By Dylan Kickham
Stay up to date