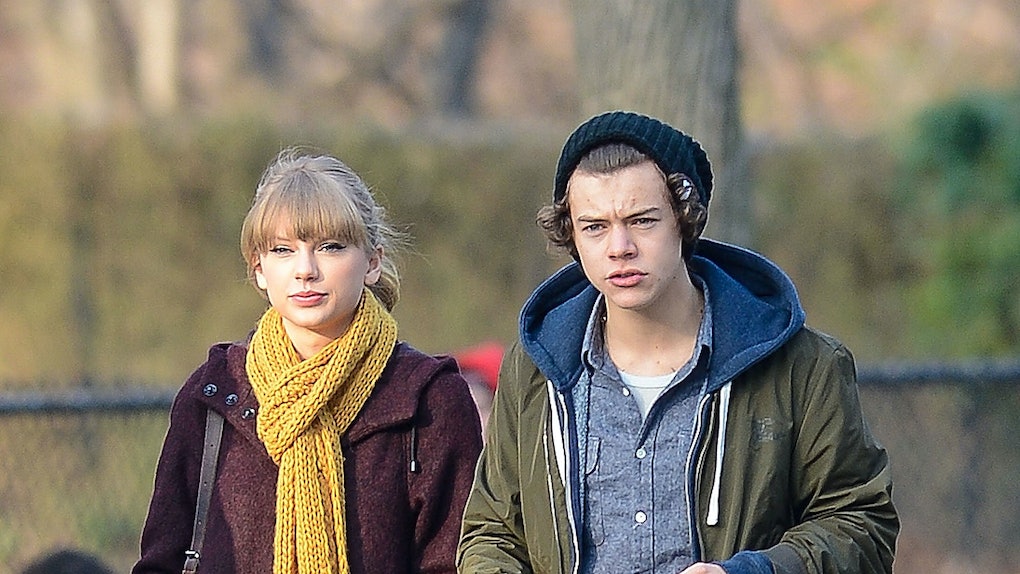 Is Harry Styles’ Song “Falling” About Taylor Swift? Here’s Why Fans Think So

It's been a while since Haylor was a thing, but Harry Styles brought back all the fan theories when he dropped his highly anticipated album Fine Line on the birthday of one of his most well-known exes. If you listened to the tracks, you might be wondering: Is Harry Styles' song “Falling” about Taylor Swift? Here's why fans are speculating that it is.

I know it's hard to believe, but it's been seven years since Swift and the former One Direction singer were linked for a few months between the fall of 2012 and winter of 2013. Since then, they've both moved on, with Swift now linked to her longtime boyfriend Joe Alwyn while Styles went on to date Kendall Jenner, Camille Rowe, and a slew of other models.

While their fling was brief, Styles reflected on the now infamous photos of them that were taken while they were walking in Central Park just a few years ago.

"When I see photos from that day, I think: Relationships are hard, at any age," Styles told Rolling Stone. "And adding in that you don't really understand exactly how it works when you're 18, trying to navigate all that stuff didn't make it easier."

"I mean, you're a little bit awkward to begin with," he continued. "You're on a date with someone you really like. It should be that simple, right? It was a learning experience for sure. But at the heart of it, I just wanted it to be a normal date."

And Styles reignited Haylor stans on Dec. 13 when he finally dropped his much-hyped Fine Line album, coincidentally on the same day as Swift's 30th birthday. Fans are already reading between the lines, and the "Falling" lyric, "I write too many songs about you," has convinced many fans that the track is about the Lover hitmaker.

Theories aside, Swift isn't the only ex that's featured or referenced on Fine Line or even "Falling" for that matter. His former girlfriend Camilla Rowe, whose voice is featured "Cherry," previously mentioned the Beachwood Cafe that's referenced in "Falling" in a September 2018 interview. "I’d wake up with the sun and walk down to Beachwood Cafe for some eggs and toast, and then have friends come over to my house to swim," the model told Lucky Brand. "I’d read in the sun, cook dinner with my boyfriend, and watch the Sopranos."

In addition, Styles memorably ate fish sperm rather than answer Kendall Jenner's questions about if any of the songs on his album were about her on The Late Late Show, so I wouldn't be surprised if she was an inspiration on a track or two.

Still, I have a feeling Haylor fans will be sticking to their guns on this one, but I wouldn't be surprised if the singer sheds more insight on the inspiration behind his songs when he hits the road next April in the U.K. for his Love On Tour. In the meantime, let the theories commence.