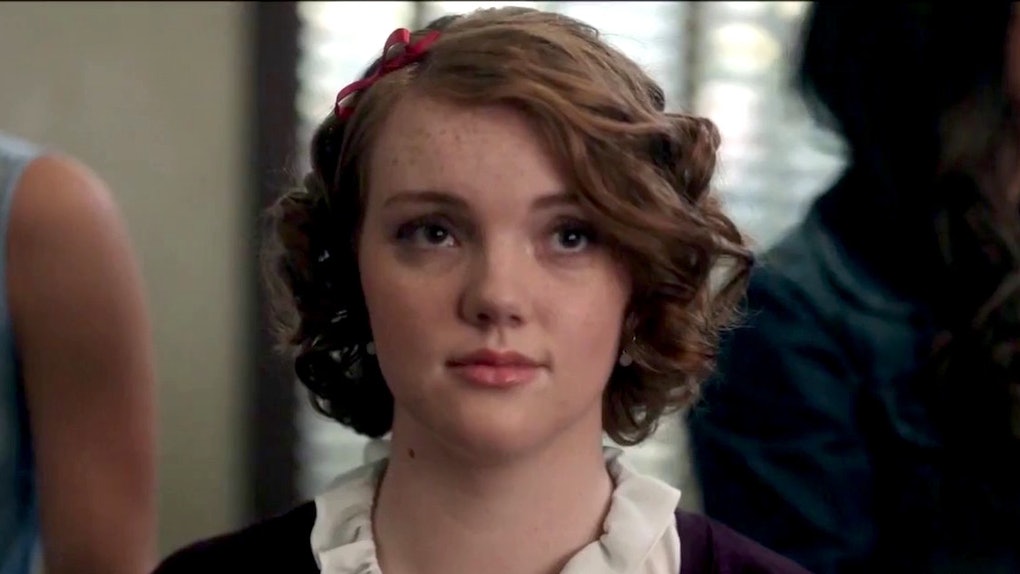 As Riverdale continues into the twisted murder mystery of its second season, fan theories about who is under that black hood are popping up all over the place. At this point, pretty much everyone is a suspect, even seemingly nice and harmless side characters like Ethel Muggs. In fact, a really detailed new fan theory is making a compelling case for Ethel being the person responsible for all the murder in Riverdale recently. So is Ethel really the Black Hood on Riverdale? You might be shocked to read up on all the clues pointing to the possibility of Ethel being the criminal mastermind terrorizing Riverdale. Let's get into the mind-bending new theory.

The "Ethel is the Black Hood" theory comes courtesy of one Redditor, who spent paragraphs detailing all the subtle hints and clues that seem to confirm this surprisingly convincing suspect. The brunt of it goes back to how we saw Ethel reacting to Betty unleashing her dark side when she tortured Chuck in the hot tub at the beginning of Season 1. While Veronica was horrified to see Betty nearly drown Chuck in order to get him to confess to his harassment, we actually see Ethel smile, relishing in Betty's lethal turn. Ethel again grins later in the season, when Betty angrily confronts Chuck in the school cafeteria. This connection to Betty's dark side is potentially very telling, since one of the main things we know about the Black Hood is that he or she feels incredibly connected to Betty, especially Betty's ruthless side. But the theory gets even more interesting: Obviously, Ethel isn't the actual person wearing the black hood and killing everyone, but she might be a part of a whole Black Hood family affair.

The theory goes on to posit that Ethel may be working with her father to take perpetrate the Black Hood's actions. Now, we haven't actually seen Mr. Muggs on the show at all, but there's some convincing hints that he could be involved in the Black Hood killings. Betty has already been guessing that the Black Hood may have a daughter after that Nancy Drew cipher thing (she writes a daughter theory in her notebook after solving that code), and from what we know of Mr. Muggs, he may have just as much motive as Ethel to start "cleansing" the town. Mr. Muggs attempted suicide after being cheated out of a deal with Hiram Lodge, and the Muggs family lashes out at the Lodges in the hospital towards the end of Season 1, right before the Black Hood shoots Hermione Lodge's business partner and secret lover, Fred Andrews.

Another little nugget that makes this theory even stronger is Ethel's dark poem that she reads in the first season, which may hint at the use of a black hood ("my mouth had been sewn closed") and also reveals a deep bond with her father. After Mr. Muggs' failed suicide attempt, it's a bit easier to believe that he may be emboldened to turn the gun on those he feel have wronged him, and the hints that Ethel has a strong bond with her dad and in fact may relish in lethal acts of justice suggest that she might be helping her dad out. The only time we've seen Ethel this season, she had called Archie's anti-Black Hood vigilante group the Red Circle, claiming she was being followed by the killer, but Archie showed up to find her unharmed and with no information about the Black Hood. Could she have just been testing the Red Circle's response time to see what she and her dad are up against? Hmmm, makes you think.

More like this
In 'Riverdale' Season 5, Toni Topaz Is The Black Superwoman Without A Cape
By Erika Hardison
5 Facts About Courtney From 'The Circle' Season 2
By Dylan Kickham
Who Is Daniel Tiger On 'This Is Us'? Randall's Visit To 'Mister Rogers' Was A Big Deal
By Ani Bundel
Stay up to date