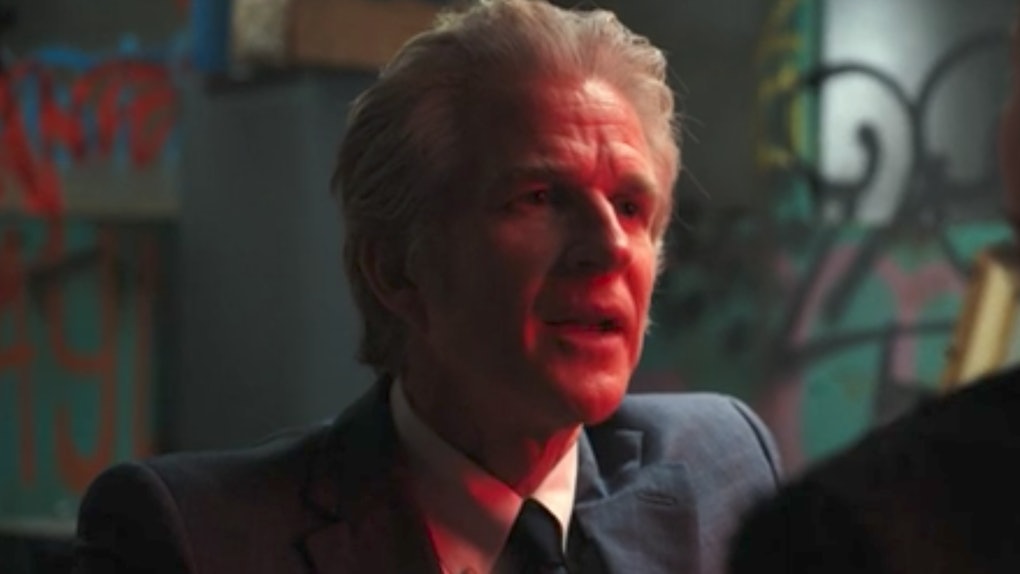 Is Dr. Brenner Eleven's Dad On 'Stranger Things'? He May Not Really Be Her "Papa"

Although most fans thought his story ended in Season 1, Dr. Martin Brenner's presence continues to haunt Eleven's life in the second season of Stranger Things as well. Spoiler alert: This post will discuss details from episodes 1-7 of Stranger Things Season 2. The final two episodes of the season will remain unspoiled. The new season sees Eleven grappling with her early life and trying to find out the truth about what happened to her before breaking out of Hawkins Lab. So, of course, this leads to questions about her "papa," Dr. Brenner. But just how accurate was Eleven's nickname for him? Is Dr. Brenner really Eleven's dad on Stranger Things? Let's get into what we know about the twisted relationship.

Though Dr. Brenner doesn't actually appear IRL in the first several episodes of Season 2, we do see glimpses of him in flashbacks and visions later on. After escaping the Upside Down and living by Hopper's restrictive rules in a cabin in the woods for a year, Eleven decides to break out on her own and find her mother about halfway through the new season. We already met Eleven's mother, Terry Ives, briefly in Season 1 when Hopper and Joyce Byers discovered her. Ives is living with her sister, Becky, who is also her caretaker, since Terry is stuck in a catatonic state.

Eleven is able to use her powers to track Terry down in the new season, and uses them again to get inside her mind to learn that her crippling catatonic state is caused by reliving the traumatic events of Eleven's birth. Eleven (who discovers that her real name is Jane) is able to see her mother giving birth to her with Dr. Brenner looking on in scrubs. Dr. Brenner then takes Eleven away as a newborn and and orderly lies to Ives by saying the baby was not breathing. Soon afterwards, Ives returns to Hawkins Lab with a gun, shoots a guard, and begins frantically looking for where Brenner and his team took her daughter. She finds Jane and another young girl (who we later learn is Kali/Eight) playing in a room, but is then quickly subdued by security guards. Dr. Brenner orders an orderly to pump 450 volts of electricity through Terry's head in order to send her into the catatonic state she's in today.

The quick flashback sequence is hugely important in informing Eleven and the viewers about her traumatic roots, but it still leaves us guessing when it comes to Eleven's parentage. Although Eleven calls him "papa," it doesn't seem like Brenner is Eleven's actual dad, judging just from the tense relationship he has with Terry. Then again, Terry did allow Brenner in the room with her when she gave birth to Eleven... but he could have just been there as a doctor. There's still not much to go off of to make a definitive statement on whether Brenner is Eleven's actual father or just an evil scientist who kidnapped her at birth.

But... it does sound like we'll be getting some more answers to this question in Season 3. After locating her former cellmate, Kali (AKA Eight), the two superpowered women team up to track down and kill one of Brenner's operatives, whom Eleven saw administering the electricity that left her incapacitated for the rest of her life. To Eleven's surprise, the man asserts that Brenner is still alive — she had assumed he died when the Demogorgon attacked in the Season 1 finale. After returning from the mission, Kali pushes Eleven even further by making her see a vision of Brenner, urging her to confront the source of her anger and trauma.

So with, Brenner still out there somewhere, I'm sure we will be learning more specifics about his cloudy relationship with Eleven soon enough.