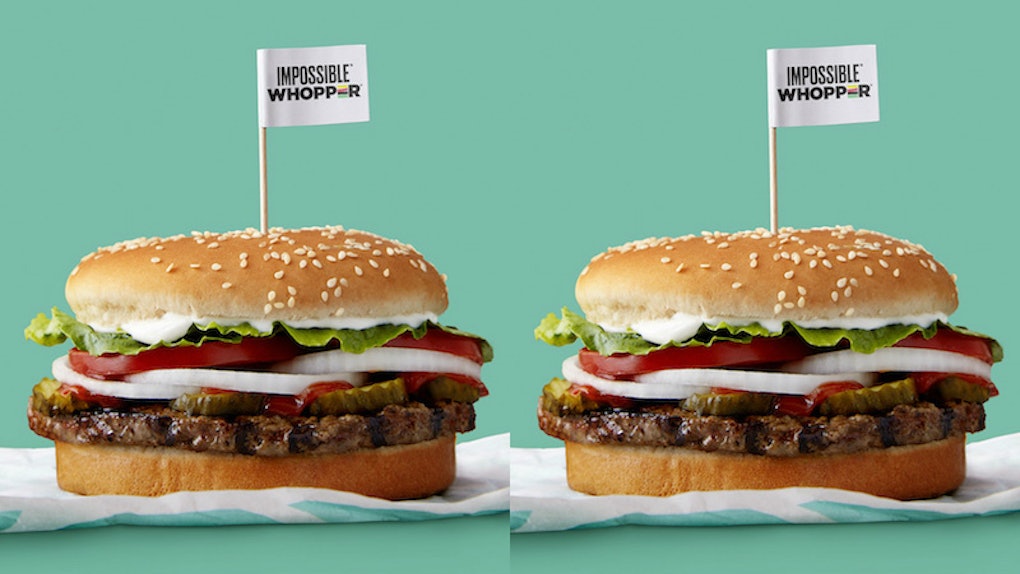 Is Burger King's Impossible Whopper Available Near Me? It Will Be In More Locations Soon

With the pace news breaks these days, you might have a hard time remembering all the way back to the beginning of April when Burger King first announced the arrival of the Impossible Whopper. The plant-based sandwich launched as a test item in St. Louis Burger King restaurants on April 1. A month after the test run in just one city, you might find yourself wondering: Is Burger King's Impossible Whopper available near me? Well, if you're craving this meat-free bite from the fast food joint, you just might be in luck.

On Monday, April 29, Burger King shared that the test run in St. Louis did "exceedingly well." So, what does that mean? Well, in an email from Burger King to Elite Daily, the fast food chain shares that success means Burger King now has plans to extend the the test of the Impossible Whopper to more markets "in the very near future." IDK about you, but that sounds like you could be enjoying an Impossible Whopper in a location near you in no time. Burger King was not able to provide further information about which markets would be included in the extended test run or exactly when that will happen, but it sounds like you should keep your eyes peeled for the Impossible Whopper on your local menu.

In even better news, the fast food chain also shares it is "targeting nationwide availability [of the Impossible Whopper] by the end of 2019." So, even if your city is not among those getting the test run of the burger in the "very near future," you can rest assured you'll get a taste of the plant-based dish at least some time this year.

Currently, 59 BK restaurants in the St. Louis area are serving the Impossible Whopper, per the press release announcing its debut. And, according to BK, the restaurants are "showing encouraging results" as "Impossible Whopper sales are complementing traditional Whopper purchases." IDK about you, but it sounds to me like Burger King is just as excited about the Impossible Whopper as its customers, so I'd expect to see it in additional test runs sooner than later. Until then, you can always head to the STL to give it a try for yourself. Road trip, anyone?