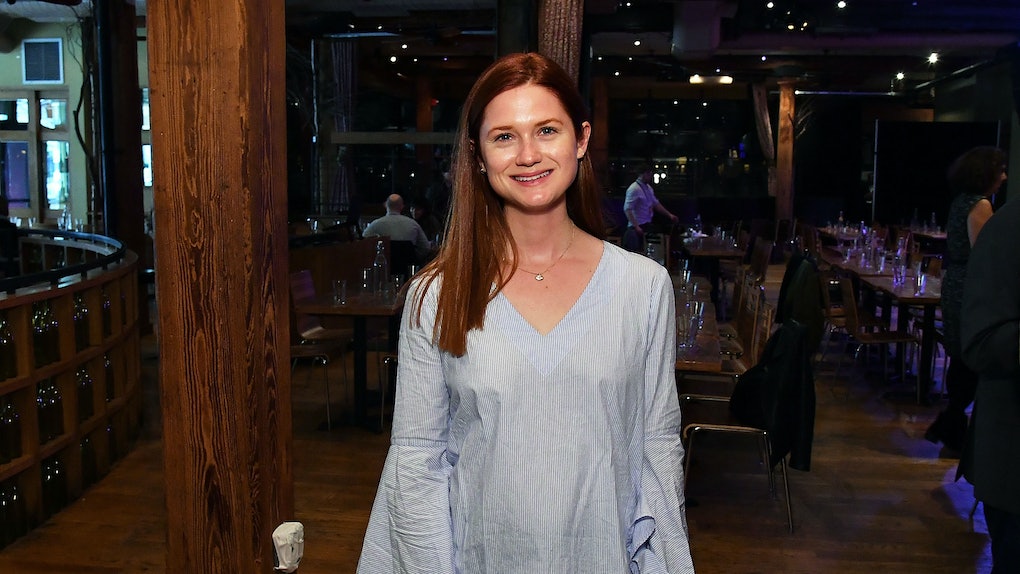 Is Bonnie Wright Single? Here's What We Know About The 'Harry Potter' Star

OK, so if you're telling me you didn't admire the eff out of Ginny Weasley throughout the Harry Potter series, I'm going to need to see you outside. She fought valiantly alongside Dumbledore's Army (and then took over when the fantastic three left Hogwarts), was a kick*ss Quidditch player, and was always there for Harry, Ron, and Hermione. So, of course, her incredible contributions to the storyline made me want to ask questions about the actress' real life, like, is Bonnie Wright single? And if so, since when? And how can I learn every last thing about her relationship status? The short answer is, she might be flying solo, but it's not that simple.

While I would do anything to see a real-life Harry Potter/Ginny Weasley relationship, unfortunately, that's not possible. Daniel Radcliffe is head-over-heels for another leading lady, Erin Darke, so that's out of the question. But Wright has been linked to another Harry Potter star, though not one who you'd expect. In 2010, Wright confirmed she was dating Jamie Campbell Bower, aka young Gellert Grindelwald in Harry Potter and the Deathly Hallows: Part 1. (Also the vampire Caius Volturi in the Twilight series. #TBT.) According to Us Weekly, they got engaged in April 2011. "Jamie fell for Bonnie really badly," an insider reportedly said, according to Marie Claire UK. "He says they are completely in love. It all seems very whirlwind, but they both say it’s the real deal." Unfortunately, in 2012, Wright and Bower called off their engagement.

In 2013, Wright reportedly dated actor Jacob Artist. Elite Daily reached out to Artist's team for confirmation of his relationship with Wright, but did not hear back by the time of publication. Wright and Artist starred alongside each other in After The Dark, one of the many movies Wright has been in since she stole our hearts in Harry Potter. According to Ranker, the two reportedly dated for a year and a half from January 2013 to May 2014, and although they seemed to have stayed pretty mum about their relationship, they did attend Elton John's AIDS Foundation Oscar Viewing Party in February 2013. However, 2013 was also the year Wright was first linked to Simon Hammerstein, and she actually did verbally confirm that relationship, so it's very possible Wright and Artist were just friends and co-stars.

Wright and Hammerstein reportedly met at a dinner party in London is 2013, the Evening Standard reported. Hammerstein is an entrepreneur and owns The Box, a "theatre of varieties" with locations in New York City and London. In an interview with the publication in 2014, Wright couldn't help be speak highly of Hammerstein and their relationship. "We got on really well," she said. "That’s why we’re still together. London’s such a melting pot that you can always find lovely people. It’s nice being with someone who respects the arts so we talk about everything together."

While there hasn't been word of Wright and Hammerstein's relationship recently, in 2016 Bustle reported that the couple was still together. Elite Daily reached out to Wright's representative about her current relationship status, but did not hear back by the time of publication. They may still be together, or perhaps Wright's embracing singlehood and keeping her private life on the DL. But one thing's for sure: God knows Ginny Weasley doesn't need a man, and neither does Bonnie Wright.