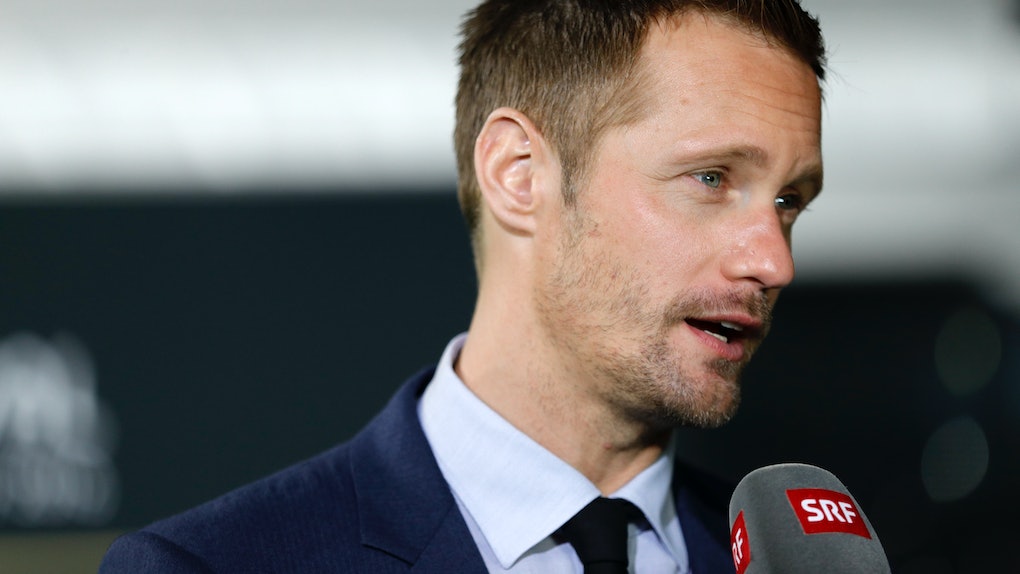 Is Alexander Skarsgard Single? 4 Things To Know About The 'Big Little Lies' Star

Big Little Lies star Alexander Skarsgard has become an unexpected highlight of the ongoing awards season, experiencing several wins for his role as Celeste's abusive husband Perry on the HBO series. Skarsgard has already won an Emmy, a Golden Globe, and a Critics' Choice Award for his portrayal, and he'll see if his winning streak continues at the SAG Awards on Jan. 21. Other than being blown away by his worthy performance, you may not know too much about the Swedish native, who was previously best known for his role in True Blood. For instance, is Alexander Skarsgard single?

Obviously, the most important thing about these award shows is to celebrate actors and filmmakers' outstanding work, but receiving such attention at them, as Skarsgard has, makes you wonder about that celebrity. I admire stars who keep their private lives so under wraps that we genuinely don't know if they'll attend an event with a significant other or not. Other than that odd peck with co-star Nicole Kidman when he won the Emmy in September, we have no clue whether or not Skarsgard has an actual girlfriend to kiss in moments like that. That's why we're here to let you know what's the deal with Skarsgard's love life.

1. He Dated Alexa Chung For About Two Years

Skarsgard was first seen out with British model Chung in June 2015, but the two were notoriously private about their relationship. The greatest hint anyone ever had of their connection was Chung's 2016 Instagram post in which she playfully made fun of the intense diet Skarsgard underwent in preparation for the title role in The Legend of Tarzan. Such privacy is usual for Skarsgard, who grew up in a family of famous actors in Sweden.

Rarely photographed together, their split was reported in July 2017. A source told E! News that the breakup emerged from the two's busy schedules and not seeing each other often:

They really did love each other and were pretty serious. They still have respect for each other.

2. He Went On A Blind Date With One Of Leonardo DiCaprio's Exes

Shortly after breaking up with Chung, Skarsgard reportedly tried to get back in the game by going on a blind date with 25-year-old model Toni Garrn. Garrn was romantically linked to DiCaprio from 2013 to 2014, She and Skarsgard met up in Montauk, New York, but Garrn was apparently so nervous that she brought two friends with her (girl, same). A source with the scoop on the date said the couple didn't really hit it off, and any connection seems to have flickered out. Garrn was later seen out with a new man in December 2017, so it's safe to say that she's probably not dating Skarsgard.

3. There Were Once Rumors of Him Dating His Then-Co-star Kate Bosworth

In 2011, amidst promotion of Skarsgard's film Straw Dogs, tabloids suggested that he was involved with co-star Bosworth. It wasn't the first time people have suspected he was with a castmate — there were also rumors of him dating True Blood co-star Evan Rachel Wood during the show's run. In a 2011 GQ profile, he appeared reserved when asked about the possible relationship with Bosworth:

He shuts down, smile disappearing, with a completeness and efficiency that could only come from growing up in the public eye. 'My father always kept the family out of the press,' he says later, almost apologetic.

4. He Gets That You Can't Overhype A Relationship For It To Survive

Speaking to The Telegraph in 2010, Skarsgard shared a story of how he struggled with a long-distance relationship when he was 21. Living in New York at the time, he missed his girlfriend in Sweden, and she broke up with him because their situation wasn't working out. He missed her so much that he returned home, but soon realized why it hadn't worked between them:

I got back and we hung out for a little while, but we were just too young and too different. She was 18 and I was 21. She's a lovely woman but I didn't even know her. I spent six months creating her in my mind.

So, for anyone with a budding crush, it looks like Skarsgard is currently single and just enjoying the current highlights of his career.

More like this
25 Instagram Captions For Your First Post-Vaccine Date
By Corinne Sullivan
12 Date Ideas Inspired By 'Schitt's Creek' That Are Simply The Best
By Corinne Sullivan
Who Did Emily Poison? 'The Handmaid's Tale' Season 2 Is Off To An Intense Start
By Ani Bundel
Stay up to date