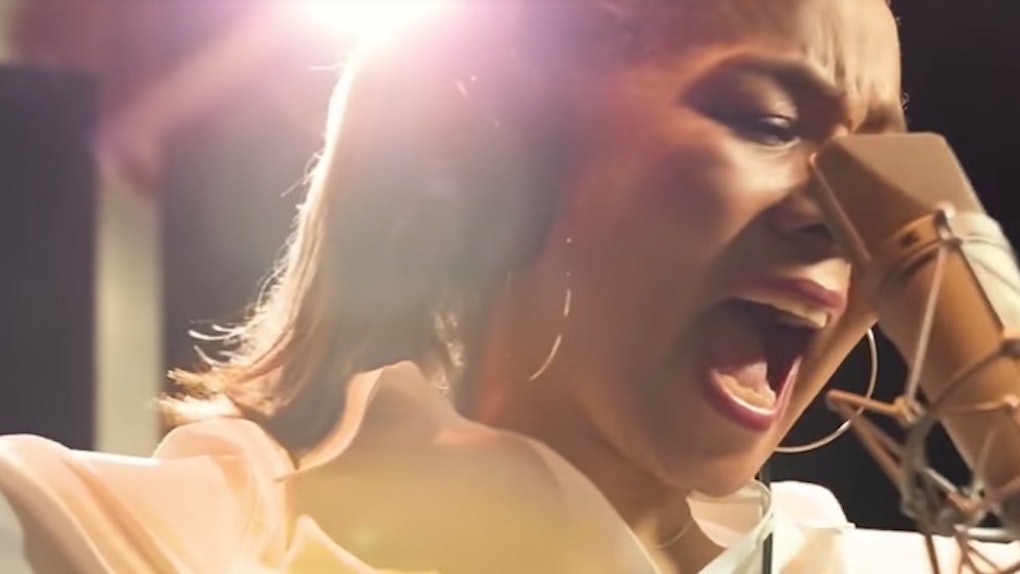 The 2018 Winter Games are so close we can practically feel the exhilaration in the air. Even if you can barely wear skates without falling or you don't know what a luge is — that's OK. You can watch the best athletes in the world do all the work while you sit comfortably on your couch. Isn't sports the greatest? But just because you're not competing doesn't mean you don't need a little musical motivation. This year's song for the Olympic torch relay is full of inspiration — Insooni's "Let Everyone Shine" lyrics are sure to get you pumped for the uplifting events to come.

"Let Everyone Shine" has been deemed the official slogan for this year's relay. On Nov. 1, the relay torch began traveling through 17 cities and provinces across the Republic of Korea, and it will eventually end up at the opening ceremony when the final torchbearer will light the Olympic Cauldron. (We're getting chills just thinking about those epic lightings of the past.) That torchbearer has not yet been revealed, but they typically hail from the country hosting the games. Notable recent igniters of the cauldron at the Winter Games include figure skater Irina Rodnina, celebrated hockey player Wayne Gretzky, and basketball player Steve Nash.

Insooni's performance of "Let It Shine" kicked off the relay back in November and the moving track is filled with messages of hope and unity.

Some of the translated lyrics read,

It is the moment to rise again, and follow the flame

With a shining dream deep inside of you

Together we can move forward one step at a time

When all our dreams come together

And shine as one bright flame

Let everyone shine and shine

Lighting up every corner of the world

“Insooni’s performance tonight of ‘Let Everyone Shine’ was a great way to launch the theme that will unite the nation and help share the Olympic spirit, as the Olympic flame makes its way across Korea from 1 November this year,” PyeongChang 2018 Director General of Culture and Ceremonies Kim Dae-hyun remarked last year. “She sang it with great passion and connected with the crowd celebrating the 200-days-to-go milestone of the Olympic Winter Games.”

If you're not familiar with singer Insooni, the renowned entertainer is known as South Korea's "R&B Diva."

“I am honoured to sing this very special song at the 200-days-to-go celebration and to be an ambassador for the Olympic and Paralympic Winter Games in PyeongChang,” Insooni added in November. “Music has the power to connect people, just like sport does. This is a special moment where the two have come together, and we can all celebrate this exciting time for Korea and look forward to an amazing event in 200 days’ time.”

Insooni began her career as part of the popular girl group Hee Sisters and became a disco hitmaker in the '80s. Since then, the talented vocalist released over 18 albums, won numerous awards, and even became one of the first South Korean singers to revisit Carnegie Hall for a performance.

The official motto of the games is "Passion. Connected." and the theme of the opening ceremony will be reportedly focus on peace. Katie Couric and Mike Tirico are set to host the Olympics Opening Ceremony for NBC, which airs "fully-produced" in primetime on Friday, Feb. 9 at 8 p.m. ET. It will also stream live from on NBCOlympics.com and the NBC Sports app that same day at 6 a.m. ET.

It's likely that Insooni will sing the torch relay theme at the opening ceremony, and it's been reported that stars of K-Pop and opera could be performing as well. If "Let Everyone Shine" isn't enough to get you excited, maybe Leslie Jones' unbridled Olympics enthusiasm will do the trick?

Let the countdown to the games begin.

More like this
In 'Riverdale' Season 5, Toni Topaz Is The Black Superwoman Without A Cape
By Erika Hardison
This COVID Vaccination Playlist Will Get You Pumped For Your Big Day
By Brandy Robidoux
Skateboarder Brighton Zeuner Never Thought She Could End Up At The Olympics
By Rhyma Castillo
Stay up to date