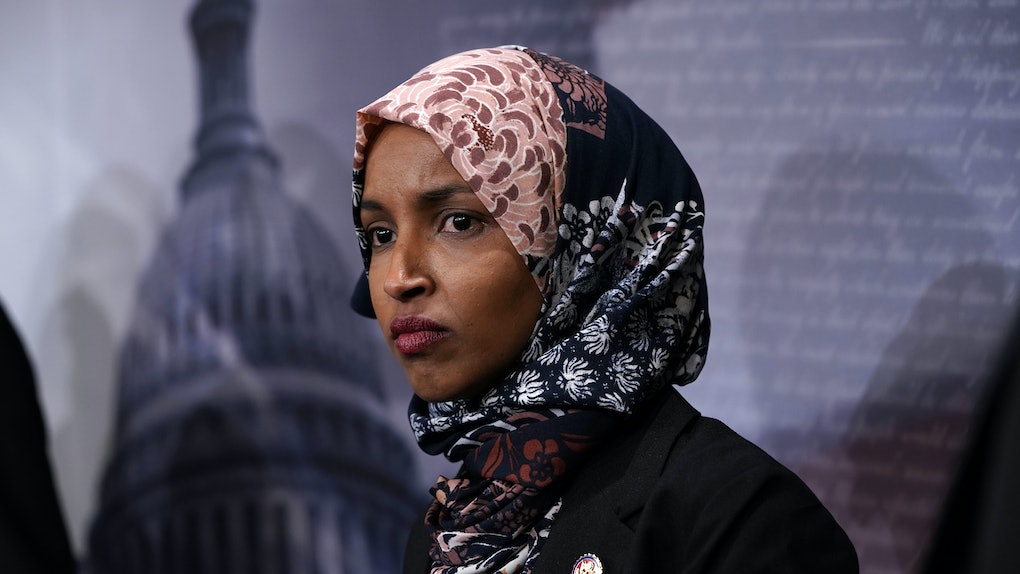 Clearly, there's no shortage of criticism for freshman congresswoman Rep. Ilhan Omar (D-Minnesota). When she's not being knocked for her words, she's apparently being targeted over her religion. On Friday, March 1, a poster reportedly showing an image the representative alongside images of the Sept. 11, 2001 terrorist attacks made headlines. It, of course, prompted a response from the congresswoman and Ilhan Omar's response to an "anti-Muslim" 9/11 poster points out an even bigger issue.

The poster, which was reportedly on display at the West Virginia statehouse, per NBC News, apparently showed a split picture of the World Trade Center engulfed in flames on top of a photo of Omar, who is shown wearing a hijab. Mike Pushkin, a Democratic member of the West Virginia House of Delegates, shared a photo of the reported posted on Twitter on March 1. "'Never Forget' - You said..," read the apparent text placed at the top of the poster. Under the picture of Omar in her hijab, the poster closed with, "I am the proof - you have forgotten." The WVGOP released a statement on March 2 stating that the party "did not approve" and "[was] not aware" of the poster. The WVGOP did not reply to Elite Daily's request for further comment.

Pushkin wrote that the graphic was on display at a booth reportedly sponsored by the West Virginia Republican Party (WVGOP).

Responding to the image on March 1, Omar wrote:

No wonder why I am on the 'Hitlist' of a domestic terrorist and 'Assassinate Ilhan Omar' is written on my local gas stations. Look no further, the GOP's anti-Muslim display likening me to a terrorist rocks in state capitols and no one is condemning them!

Elite Daily reached out to representatives for Omar and the WVGOP for further comment, but did not hear back by the time of publication. In a statement shared to Twitter on Saturday, March 2, West Virginia Republican Party Chairwoman Melody Potter wrote that an exhibitor displayed a sign that it "did not approve, [was] not aware of before the day started, and [does] not support," adding that the poster has since been taken down. "Our party supports freedom of speech, but we do not endorse speech that advances intolerant and hateful views," the statement continued.

It's good to hear that the poster been taken down, but it's pretty unnerving that this appears to be an example of some of the reported threats against the congresswoman. Omar shared a screenshot of an Instagram post on her Twitter, which reportedly showed a message written on a bathroom stall that read, "Assassinate Ihlan Omar." I mean — calling for her assassination? Really?

While some Democrats have denounced the poster, such as Pushkin, who shared the reported poster on Twitter, per NBC News, it seems troublesome that Omar seems to believe this is just the latest example of reported incidences similar to this. Long, long sigh.

Unfortunately, this isn't the only time that Omar has found herself in the middle of drama. She recently faced widespread criticism over tweets sent on Feb. 10 about Israel and lobbying in the U.S. political system, suggesting that American politicians support Israel because they are being paid to do so by the American Israel Public Affairs Committee (AIPAC), a prominent pro-Israel lobbying group with a mission to "strengthen, protect and promote the U.S.-Israel relationship in ways that enhance the security of the United States and Israel," per its website. Though it's not a political action committee (PAC) and does not contribute funds to political candidates, the group has been recognized as a politically influential organization, which is something Omar apparently has a problem with. However, her tweets were quickly labeled as "anti-Semitic" for spreading tropes about Jewish money influencing politics. Though she apologized in a tweeted statement for the remarks, saying she never meant to "offend [her] constituents or Jewish Americans as a whole," some people still weren't happy, like President Donald Trump, who urged her to step down from either her post or the House Foreign Affairs Committee (HFAC).

But she also had some supporters who stepped in to say that her message was not anti-Semitic.

While I'm almost certain that there's more drama ahead, at least she has people in her corner. That's at least worth something, right?