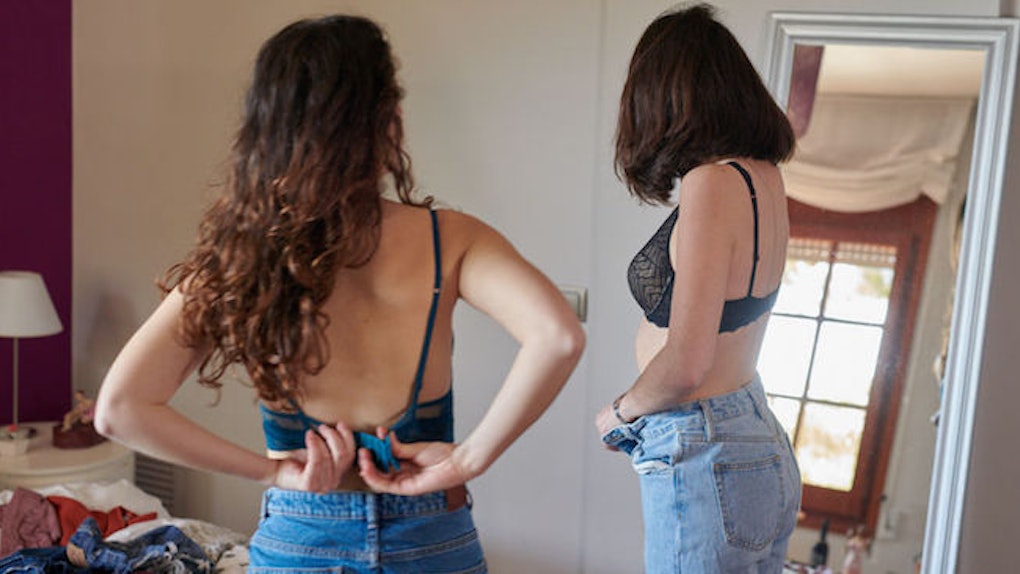 If Your College Roommate Walked In On You Hooking Up, Take Comfort With These 5 Stories

Part of the whole getting-used-to-college thing usually includes adjusting to dorm life. If you had a room all to yourself growing up, you'll need to get used to sharing your space with another person. That means you'll have to deal with another person turning the lights on and off, maybe listening to loud music, and yep — you bringing your hookups into your shared room with the possibility of your roommate interrupting. If your college roommate walks in on you hooking up, it could for sure get awkward real fast. But hopefully, they'll understand, and you'll likely both laugh about it later.

Some roommates develop a system: They'll put a sock on the door or find some way to notify the other to not disturb them or come home. For some, a simple text like, "Don't come in the room for the next hour please," will suffice. But sometimes, people can forget to give a head's up, or your roommate might desperately need to grab a textbook from their bookshelf. Here are some stories in which someone interrupted... it felt terribly awkward at the time... but most importantly, they're able to look back on it now and laugh.

An RA walked in on this sorority girl and her frat boyfriend.

"We were alone, lights down low, music on, my roommate was nice enough to hang out in the common room for a bit so [my boyfriend and I] started to do our thing," said Reddit user PepperedCitrus. "There was a knock on the dorm room door. We continued to do our thing because my we knew my roommate would answer. Then there was a knock on my door. It was my roommate and my RA. We weren’t doing anything wrong, my RA was just trying to touch base with all his residents before the new semester and hadn’t talked to me or my boyfriend yet. My roommate had chatted with him a bit, but [the RA] heard the music and asked if I was home. She told him I was with my boyfriend, but he didn’t get the hint and wanted to chat with me and my boyfriend. He c*ck-blocked us for small talk."

This person had to deal with constant videos on loop.

"In college, my roommate played one of those 10 hours of videos that just repeated 'My name is Jeff' over and over again on the bluetooth that was in our shared bedroom," said Redditer Eljefe56. "Bit of a mood killer."

This guy's roommate wanted to hang out with him at the wrong moment.

"Luckily we heard him right before he rounded the corner to the living room, and she jumped up and I covered myself by pulling my pants back up, and pulling my shirt back down," said Reddit user UltimateAgentM.

The three of them hung out, and he said, "I don't think [my roommate] ever knew."

"We were naked and our clothes were on the floor next to my bed and my blanket was near the foot of my bed," said Reddit user Tirith45. "My roommate puts his key in the door and turns the lock, we pulled the blanket over us right as he walked in and just pretended we were just laying there."

"He walks in and says, 'Aww, it's nap time how cute.' The roommate looks on the floor, sees our clothes, and runs out of the room faster [than] I have ever seen him run."

They both started laughing hysterically.

Another person's roommate kept asking about kitchen supplies and groceries.

"I used to live in a suite with my college roommates," said Reddit user Gandalf-the-Bae. "One time my (now ex) boyfriend and I were fooling around in my room and one of my roommates interrupted not once, but twice."

The user said their roommate knocked, asking if it was the other's water filter. They said yes, then went back to having sex with their boyfriend. A few seconds went by, and then the roommate asked if he could used the water filter. They said yes. They left and then the roommate came back again to ask if it was the other's tomato on the counter. At least they asked?

Interrupting a hookup isn't the most jarring thing that can happen when you live with a roommate in a shared dorm, though.

This pair walked in on... the miracle of life?

"I was visiting a friend at another school for the first time," said Reddit user Snoborder88. "We walked into his dorm room and saw a girl on his bed in labor. We were both speechless until his roommate came running back from the bathroom with a wet towel and said, 'Don't freak out! Don't freak out!' The girl turned out to be the roommate's sister who lived nearby and was visiting. She went into labor a few weeks early so everyone was thrown off guard."

Remember, having a roommate will take some getting used to, so you'll figure out whatever works best for the both of you while maneuvering bringing people home.

Check out the “Best of Elite Daily” stream in the Bustle Appfor more stories just like this!