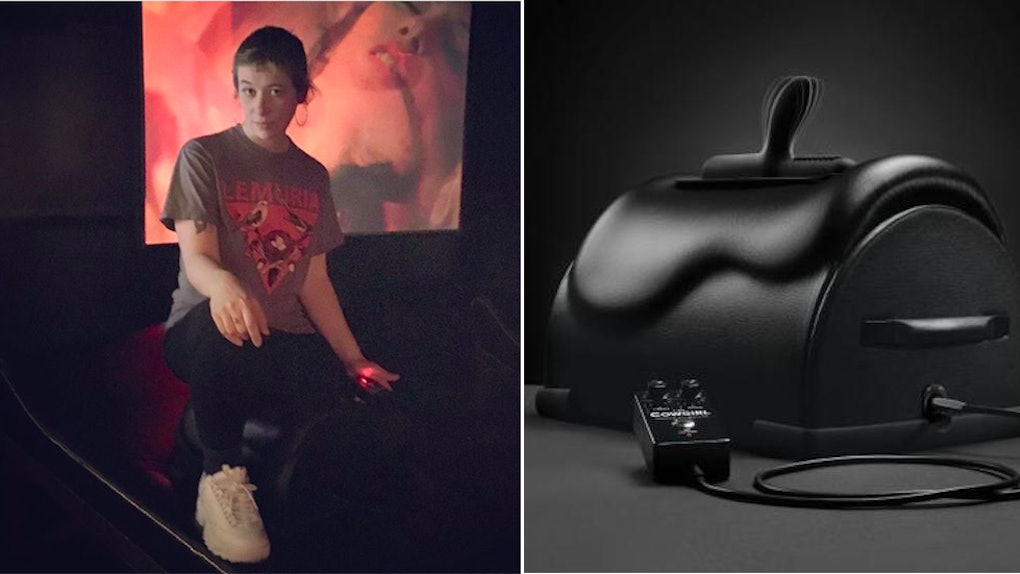 Designed by sex educator Alicia Sinclair, the Cowgirl is currently on display at the Museum of Sex in New York from now until March 2, 2018. The Cowgirl's design mimics a rodeo machine, with a handcrafted saddle-style seat and attachments for either non-penetrative bumping and grinding or insertable silicon. It can be operated by a handheld LED remote or a smartphone app for cordless control. At a retail price of just around $2,000, the Cowgirl is certainly a luxury item and an investment piece.

When I was invited to try out the Cowgirl for myself, my first question was: Who would be interested in acquiring this piece of technology? Is this consumer someone who is very accustomed to being alone? Is she someone who has transcended all sexual inhibitions, to the point where she will literally f*ck anything? Might she be me?

For my date with a sex machine, I opted to wear something casual: jeans, a t-shirt, and comfortable shoes. I left the house feeling good in my skin and decided to ride my bike instead of the train. Rain from the night before had soaked my bike seat, and my butt was damp before I reached the Williamsburg Bridge. Briefly, I fretted about appearances before remembering that the Cowgirl wouldn't judge me. This day is about myself, my pleasure, my fun.

And fun was much needed. I started off the year breaking up with my girlfriend, and things had been a bit lonely ever since. I hadn't had sex in months, not because of a self-esteem issue, but more because of sheer exhaustion. After breaking up with my girlfriend, I thought that I might try dating men again, but I didn't get past the first dating app match. Talking to him felt like I was putting in 75 percent of the work. If this person didn't know how to ask me questions to keep up a good conversation, how would they possibly be able to communicate in bed?

Flirting should never be work, but I have less tolerance than most. In addition to being a sex and dating writer, I'm a professional matchmaker. I love love like it's my job. Therein lies the problem: Love is my job. And sometimes, work is hard.

But as I was biking toward my date with a sex machine, I soon began to realize that something had shifted in the warm air. A guy winked at me on the Williamsburg Bridge, and I actually thought he was cute. The air was damp in that spring way, and even the garbage scent of the city smelled fertile. Everyone looked frisky in their short sleeves. As I locked up my bike outside of the museum, I locked eyes with a girl walking arm-in-arm with her boyfriend. We totally eye-f*cked.

Suddenly, I wanted to have sex with everything that moved. F*ck everything, indeed.

"In general, most sex toys — including those made for female use — have been designed by men," says Alicia Sinclair, designer of the Cowgirl. "This is based on numerous factors such as opportunity, resources, and social acceptance." She adds that many sex machines were designed by men with the intention of enjoying watching women as they used them.

So where does the Cowgirl come in?

"My overarching goal of creating the Cowgirl ... was to 'take back' this product," says Sinclair. "Made by women, for women, with women’s pleasure and desire in mind is what makes this product 'ours.'"

The Cowgirl rested on a tasteful leather chaise lounge. I ran my hands over her, feeling the sturdy, supple saddle. Right away, I noticed that this machine was designed with consideration for the little things. Care was evident, from the silicon base, which prevented your floor from being scratched, to the specific design of the seat, which protected your knees from getting knocked.

Sinclair says that she designed the Cowgirl with comfort and ease of use for the rider in mind. "This is reflected in the directional size and shape of the remote, the comfort of a saddle style seat, silicone bumpers to add stability, and a sleek design that reflects style and class a woman would feel proud to have in her home," she says.

With the Cowgirl, I didn't need to waste time in idle conversation. The Cowgirl understood me intuitively, without me even needing to speak. After all, she was an extension of myself.

I climbed on top of her. She was easy to control, with a remote that smoothly plugged in just like a piece of musical equipment would attach to an amp. And she was loud. We eased up slowly, but once I got her going full throttle, she sounded a bit like a dirt bike revving in a garage.

At first, that embarrassed me, before I remembered that I had nothing to be embarrassed about. There shouldn't be anything secret about sex. With the spring weather outside, it was evident that sex was all anyone (or at least, I) was thinking about anyway.

As I rode the Cowgirl, I felt like I was entirely alone with the pleasure of my animal self. She was the beast inside of me, loud and hungry, the one who wanted to taste all the joys of the world. The one who was completely at peace with herself, knowing that all the delights on Earth existed for her pleasure. She felt beholden to no one. She knew her life was hers to do with whatever she pleased.

A security guard cleared their throat before I got too carried away, reminding me that I am in public and might not want to lose myself completely. I climbed down off the Cowgirl, sorry that we couldn't spend more time together. But I knew that the pleasure she provided me had always existed within me, all along.

I felt a release as I coasted down the other side of the Williamsburg Bridge back into Brooklyn. Before I got home, I stopped and bought flowers, completely in love with myself.