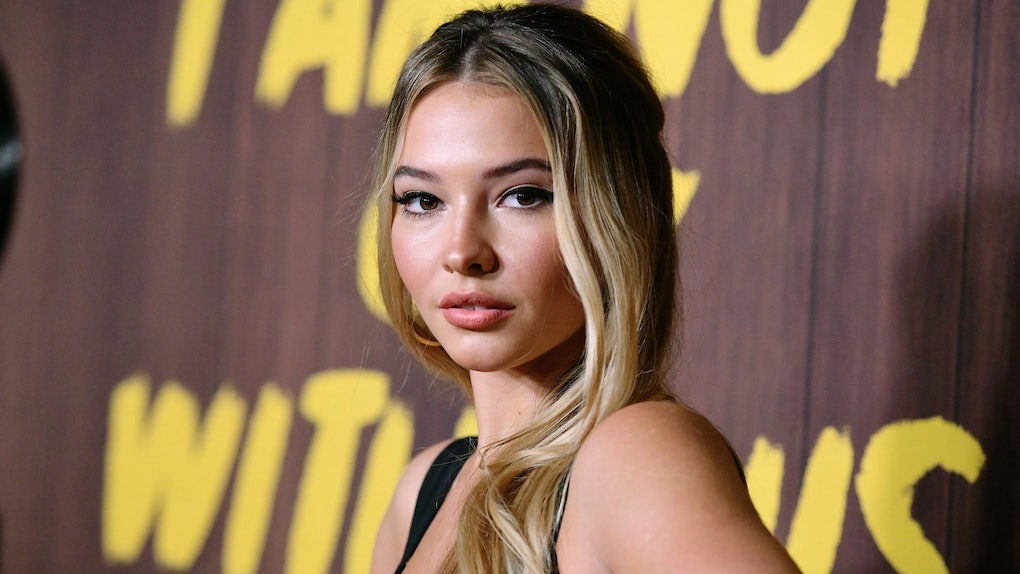 You've been there before: You're scrolling through your Instagram feed when you see your favorite celeb post about their favorite new product — a face serum, vitamins that will make your skin brighter, or a specialty food service. You can't help but want to be like the stars, but are the products worth it? In Elite Daily's I Tried series, we put it all to the test. We're trying those products as well as celebrities' health and wellness tips, recipes, and life hacks. We'll do the leg work and tell you what living like your fave star is really like.

While watching Outer Banks, a few things are immediately clear: JJ must be protected at all costs, becoming a "treasure hunter" is just as cool as it sounds, and, possibly most obviously, Madelyn Cline's glowing complexion is skincare goals. The 22-year-old easily passes for rebellious teenager Sarah Cameron, and for that reason alone, her beauty secrets could be worth $400 million in Royal Merchant gold. Luckily, though, the Netflix star shared her tips with her fans for free, so I tried Madelyn Cline's nighttime skincare routine without breaking my Pogue budget.

In a video tutorial posted by Harper's BAZAAR, Cline says her mother instilled the importance of skincare in her from a young age. But it's not just about looks; Cline also uses her evening routine as a way to wind down. She even makes it a point to put her phone away, so the process feels more like a calming ritual than just an attempt to remove the day's makeup.

Cline may have reached celeb status once Outer Banks hit Netflix, but the actor is still super down-to-earth when it comes to the beauty products she uses. Most of the items in her routine are drugstore finds, and even the two pricey products she admits to splurging on can be substituted with less expensive alternatives. In fact, Cline's whole routine can be replicated with items you have at home, or other budget-friendly products you can buy online. So, once I raided my vanity and donned a headband (my take on the John B. bandana), I worked with what I had to replicate Cline's routine, Pogue-style.

Cline starts her evening off with some Johnson's Baby Oil With Shea & Cocoa Butter, which she uses to remove her makeup; plus, she says she likes the feel of the oil on her skin. Luckily, I had a similar product, Avon Skin So Soft, in my drawer of summer essentials, so I used that for this step.

After rubbing a handful of oil all over my face and neck, I have to admit: I get it. I wasn't wearing any makeup to start with, but the smell of the oil made me nostalgic for when I was 16 and would lather tanning oil all over my body (before I realized how harmful that could be for my skin, of course). Slathering on the oil was also a surprisingly soothing way to ease into a chill, meditative state.

Confession: I am a Proactiv girl through and through. Since I started on the program when I was 12, it has always kept my skin pretty much blemish-free. Because I'm hesitant to part ways with something that works so well for me, I used Proactiv's Step 1 Cleanser in place of Cline's Neutrogena Rapid Clear Stubborn Acne Cleanser.

My Proactiv cleanser has the same active ingredient as Cline's chosen item (though Proactiv is only 2.5% Benzoyl Peroxide, as opposed to Neutrogena's 10%), so to me, this was a strong enough similarity to justify the substitution.

The downside was, I couldn't really tell if my cleanser managed to clean off all the oil I had just slathered on. According to Cline, the cleanser she uses tingles, which makes her feel like she's getting a deep clean. With no tingles, I felt like I needed an oil blotting sheet to ensure my face was truly cleansed.

Next came the splurge step. Cline uses SkinCeuticals Triple Lipid Restore 2:4:2 (one of the few high-end products she says she saves up for), but I was not looking to shell out $128 for some skin cream, no matter how good it is. Instead, I opted for Alba Botanica Even Advanced Sea Lipids, which has similar ingredients but is about $15.

Cline's other expensive skincare item is SkinCeuticals C E Ferulic, but since I already had Glossier's Super Glow in my cabinet (both products are full of Vitamin C to help brighten and tighten skin), I just used that.

In the video, Cline combines her lipid cream with her serum and applies both products at once, so I mixed my two substitutes in my palm before slathering them on my face.

It turns out, lipid cream is actually what the Outer Banks kids should have been searching for, because this stuff is gold. It's so creamy and thick, my skin felt hydrated like it never has before. And bonus, unlike Cline's preferred product, the lipid cream I chose didn't smell like bacon, which I considered another win for Team Save Money. Just note: A little bit of this stuff goes a long way — I definitely used too much and it ended up making my face feel kinda slimy.

Facial spray always seemed like something made for skincare gurus, and as someone who spends more time Googling exes than I do washing my face, I never really thought to incorporate it into my life. Still, when I saw that Cline uses Mario Badescu Facial Spray, and that it was only $7 online, I immediately bought a bottle and used it the second it arrived at my door.

Just as Cline says in her video, this spray smells amazing, and it is such a refreshing little boost to the skin. After some research, I learned the spray is more effective to use before applying a lipid cream (take notes, Cline), but either way, I plan to spray this as much as humanly possible.

Before this experiment, eyelash tonic was another "there's no way that's worth it" product, in my opinion. However, considering the DHC Eyelash Tonic Cline uses was only $14, I figured it was worth a shot.

The tonic is supposed to condition and help the growth of lashes and brows. While I can't speak to the product's long-term effects just yet, I can say that it went on easy, it made me feel glamorous, and if it will keep my lids from going bald, I will happily continue using it.

This was easily one of the strangest steps of Cline's process, and she admitted as much in her video. Originally, Vermont's Original Bag Balm was used by farmers to keep their cows' utters from getting chapped. How Cline discovered this stuff was a good lip balm alternative. I have no idea, but it works.

A dime-size glob of the balm easily spread all over my lips and left them feeling incredibly slick. And when I woke up the next morning, I used my finger to brush off the bits of dead skin and was shocked by how much came off.

The downside, however, is the smell. As Cline said in her video, this product's scent takes some getting used to. The closest I can come to describing it is that it smells like a pill bug — don't ask me how I know that (days spent playing in the dirt at summer camp can't be erased). Pleasant? No. A dealbreaker? Eh, also no.

After my face smelled distinctly like an insect thanks to Bag Balm, I was pleased to spritz myself with something that would hide that scent. While Cline uses Chanel Paris Deauville Fragrance, I opted for my wedding perfume, Something Blue by Oscar De La Renta.

While the notion of wearing perfume to bed always seemed wasteful to me (it's not like I need to smell like a bride while in my pajamas), it was surprisingly nice to fall asleep with the familiar, romanic scent in the air.

Overall, Cline's nighttime skincare routine was pretty low-maintenance, yet it had enough steps to make it feel special. I enjoyed spending a few extra minutes pampering myself, even if most of the products were things I bought for cheap at the drugstore.

While I maybe didn't get all of the oil fully washed off, and the lipid cream made my face feel a little too slick, as someone who's lucky if she remembers to wash off her makeup every night, this was the perfect way for a Pogue-at-heart to wind down in the evening and feel like a Kook princess in the process.

More like this
'Shadow And Bone' Star Jessie Mei Li Can't Stop Watching These Niche YouTube Videos
By Abby Monteil
These Tweets About Beyoncé On Netflix's 'Selena: The Series' Are Too Much
By Dylan Kickham
Jamie Lynn Spears' Promotion For 'Sweet Magnolias' Season 2 Means More Noreen
By Dylan Kickham
Stay up to date