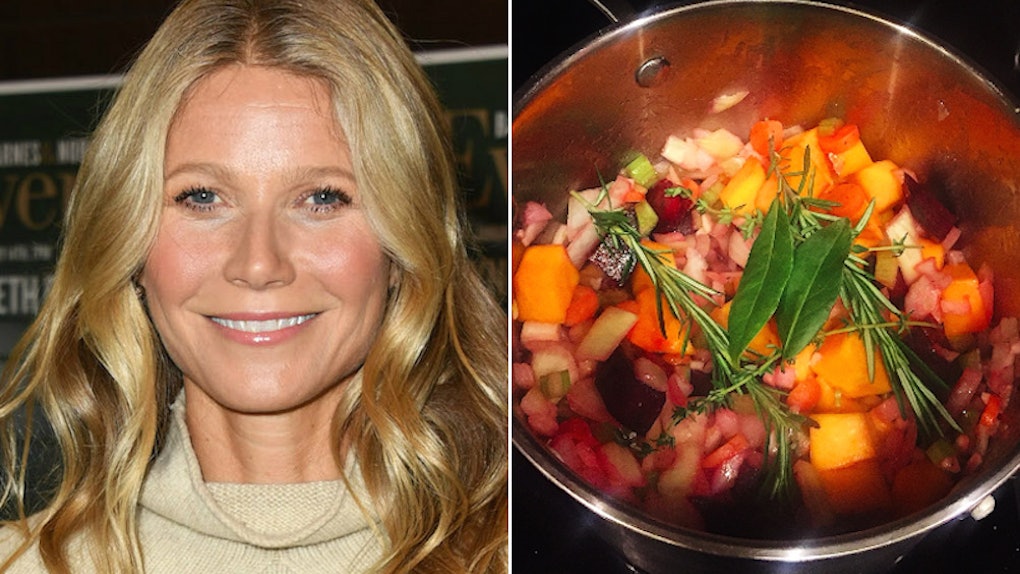 Gwyneth Paltrow's Goop is all about providing lifestyle ideas for, let's face it, rich women. The Oscar-winning actress can afford foods, household items, clothing, jade eggs for your vagina, vaginal steams, and the works that are far too expensive for any millennial with crushing debt (me) to even imagine budgeting for. So when cracking open her new cookbook, The Clean Plate, I thought I was going to see exorbitantly expensive ingredients I had never heard of for recipes I'd never think to make. But I tried Gwyneth Paltrow's new cookbook recipes, and The Clean Plate is really all about choosing good ingredients to take your meals back to the basics.

That means taking the affordable, fresh produce from your local grocery store and using it in ways I genuinely never would have thought up on my own. Maybe that's just the naïve cook talking, but some of these recipes were seriously mind-expanding. The others were avocado toast.

According to a press release about the new cookbook, Paltrow's latest foray into food literature is all about "taste, simplicity, and targeted health benefits," aka the recipes all focus on nutritious flavor. That also means a lot of the meals in The Clean Plate are vegan. I don't have dietary or moral restrictions that require me to be vegan, and I am not lactose intolerant nor allergic to gluten. But I have gone vegan before to see what kind of benefits to my skin and energy it would yield. I tried Beyoncé's vegan meal service for two weeks, so I'm no stranger to trying out a celebrity's food regimen. So when diving into this new cookbook from Paltrow, I had an idea of what to expect.

The most eye-grabbing part of The Clean Plate wasn't the over 100 recipes, however. It was the last section of the book, which broke down six different "doctor-approved cleanses" paired with a Q&A with each doctor conducted by Paltrow. These were a red flag from the jump, as fans know all too well that celebrities and the "detoxes" they endorse rarely promote healthy eating habits. In Paltrow's book, however, they're really just six different meal plans consisting of the recipes in the book, with each meal plan said to cater to different goals. The Q&As are meant to bolster the clout of these cleanses and ensure readers that they're legit. Considering the fact that they're really just plugs for the recipes in the book, I really didn't feel these were worth trying out. Plus, according to dietitian Alexandra Parker in a 2017 interview with The Huffington Post, "The theory that we need to follow a specific diet to help our body eliminate toxins is not supported by nutritional science."

Plus, these meal plans would require me making and eating three different recipes each day for a week, and that's a hell of a lot of grocery shopping to drop money on, as well as a lot of space to take up in a fridge. I live with four other women and our fridge barely has enough space on a good day, so this experience ended up being a buy-and-make-the-groceries-in-the-same-day kind of deal.

To start, I looked for a recipe that was partly familiar, and partly involved something I had never made before. Paltrow's recipe for turkey burgers with lemony garlic aquafaba sauce seemed like a good place to start, considering I had literally never heard the word "aquafaba" before reading this cookbook. Plus, it gave me an excuse to break out my Cuisinart griddler, which I don't use enough.

The lemony garlic aquafaba sauce is made from aquafaba mayo, which she also has a recipe for (pages 178 and 179). This mayo was a cool as hell science experiment, and my roommates made fun of me for finding so much joy in it. (Let me live, ladies!!) You start the mayo off by combining half a cup of aquafaba with lemon juice and kosher salt. Aquafaba is the liquid found in a can of chickpeas, so mark this as the first thing in this cookbook that I never would have thought to use. The chickpeas aren't used in this recipe at all, but you bet your a** I snacked on them while I was cooking. Waste not.

After you mix the aquafaba with the lemon juice and salt, the cool part happens. With an immersion blender, you slowly mix the previous mixture with a neutral oil. Paltrow's book recommends grapeseed or sunflower oil. I opted for grapeseed for literally zero reason. All of these ingredients mixed together look just like oils mixed together, but when you start to blend, the mixture changes from a yellow to white color and the texture changes from oily to creamy. I truly felt like Bill Nye.

To make it the Lemony Garlic sauce, you simply add grated garlic, more lemon juice, and then some lemon zest. The consistency of the sauce isn't as similar to mayo as the look of it is, but it tastes really refreshing and is honestly more tasty than actual mayo, IMO. The turkey burger recipe isn't anything novel, but they're still tasty AF. And combined with avocado, the sauce, and pickles, it's all super delicious. (The recipe calls for pickled cucumbers, for which Paltrow has a recipe on another page, but I opted just to add pickles as I'm not a fan of pickled cucumbers.)

The other recipes I tried following this first night of cooking weren't that exciting, honestly. They hold true to Paltrow's intro in the beginning of the book, in that they're quick to make and are hella nutritious, and I can't deny that the flavors are great. But they're not really anything you haven't seen before. She literally has a recipe for seed crackers with avocado and hard-boiled eggs on them. Sure, the seed cracker recipe is a bit unique, but this meal could be found on the brunch menu at the Cheesecake Factory.

Shade aside, the more basic recipes are still delicious and nutritious, so I guess I can't really complain. For your own research, the more simple recipes I tried were the strawberry and cauliflower smoothie (pg. 163), the seed cracker with avocado and hard-boiled eggs (pg. 16, with the seed cracker recipe on pg. 203), and the chicken and leek soup (pg. 43). Most of these recipes yielded enough food for leftovers, so I mercifully wasn't cooking every day. They all also take 30 minutes or less to cook, including prep time, so that's ideal. Props to Gwynny for the efficiency.

The biggest undertaking of this cookbook, however, was the "Nomato" sauce found on pg. 191. It is intended to serve as a substitute sauce for those who don't like tomatoes. Nightshade vegetables (like tomatoes, eggplant, and peppers, according to The Clean Plate), can act as inflammatory triggers for people with chronic illnesses, so this recipe serves as a substitute for people with those kind of restrictions.

First of all, wow, was this sauce an undertaking. It's one of the multiple recipes in the book that is incorporated into several other recipes (the lemony garlic aquafaba sauce is also suggested throughout the book). I chose to make the Italian braised chicken dinner because it's one of the few pasta recipes, and mama loves her pasta. So you bet I was going to test out Paltrow's pasta suggestions.

All of the other meals I made from this cookbook took 30 minutes or less to assemble. This one took about three hours.

The Nomato sauce takes about an hour to make from prep to completion. The most time-consuming part of this recipe is boiling all of the veggies so they're soft enough to blend into a liquid. To start, you sauté onions, garlic, carrots, celery, beets, and butternut squash for about five minutes. The beets and butternut squash serve as a the biggest flavor contributors and are also used to make the color similar to that of tomato sauce, but without the acidity of tomatoes. You add in some rosemary and thyme sprigs and bay leaves, and it's a truly Instagram-worthy sight.

Then, you add four cups of water and bring it all to a boil. You let it boil for 45 minutes or until it's soft enough to blend, then you use a blender to make it into the sauce. I used an immersion blender since I don't have a standard one, and also didn't want to go through the trouble of transferring everything to a blender. I was already committing to multiple hours of cooking on this night, so any corners I was capable of cutting, homegirl cut.

The Italian braised chicken is a recipe I've seen before, but it subs in chickpea pasta for regular pasta. You sear the chicken breasts, then sauté garlic and onions all in a dutch oven. Then you add the Nomato sauce in and braise the chicken for an hour and a half or until fully cooked.

I gotta be real, I followed this sauce recipe to a T, and it was the most bland sauce I have ever tasted in my life. It was lacking in depth and all-around flavor. I had to add much more salt and pepper, plus some turmeric, red pepper flakes, lemon juice, oregano, white wine, and a splash of cream to make it something I liked. The consistency is also very thin, but you can cook it for a little longer to thicken it up. Or you don't have to blend it as much in order to have some chunks of veggies, if that's your vibe.

Braising the chicken in this updated Nomato sauce, however, made for the best meal out of all of the things I tried in this cookbook.

The colors in the final dish aren't pretty, but the flavors are crazy good. I love the taste of chickpea pasta, but I imagine any kind of pasta would taste just as delicious with this. I don't know if the finished meal would have been as good had I not added all of the extra seasonings I added. This recipe for the Nomato sauce was truly something I've never seen before, though, and you can taste how veggie-filled it is with every bite.

Overall, The Clean Plate got me thinking about how I can diversify my cooking. I ended up having the energy to go to the gym every day of this week as well, and that's no doubt connected to the fact that I was ingesting a lot more nutrients than usual. Was everything in this cookbook groundbreaking? No. But they don't really claim to be, and it's all delicious. (Once seasoned enough...)