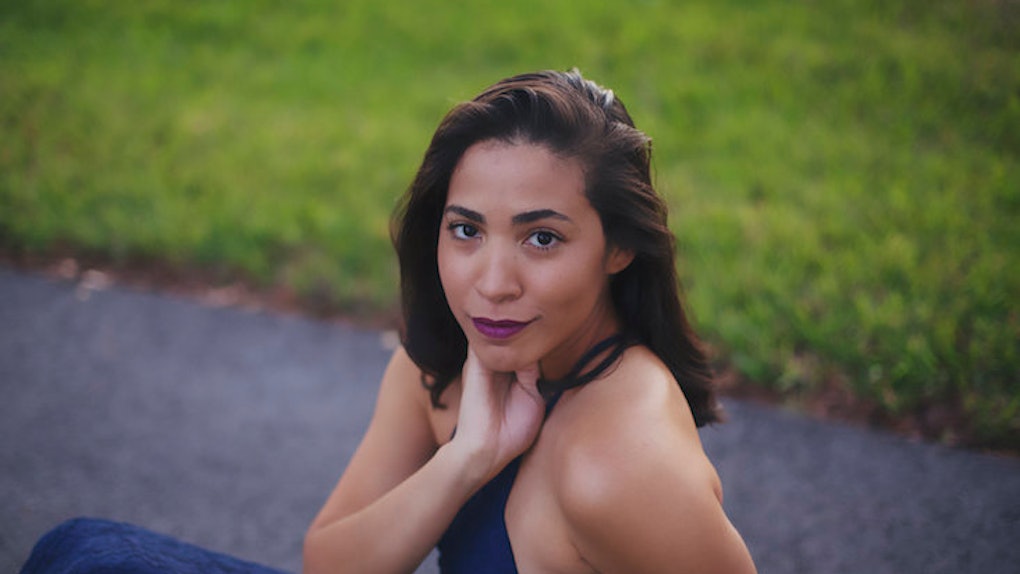 What's the most bizarre thing you've ever done? Because mine has probably been taking glamour shots for my Tinder profile. It's no secret that I've gotten weird with my dating app photos before — like when I swapped all my Tinder photos for Instagram plandids or when I straight-up staged an ugly Christmas sweater fashion show for Tinder — but this was a little different. More obvious. More intimidating. And definitely more interesting.

Whereas it might have been reasonable to assume my Christmas sweater experiment was a festive prank and my plandids just happened to be my favorite photos of myself, flooding my profile with professional glamour shots seemed more calculated. I was sure potential matches would think that I'd done this solely for Tinder (which, to be fair, I had) and that they would bolt in the opposite direction for fear of the intensity of it all (also, fair).

I was surprised to find out from professional photographer Jessica Salokar that staging photo shoots for dating app profiles isn't actually that uncommon. Although she specializes in family photography, she explains, "I've definitely had people say, 'Hey, I need new photos for my dating profile,' and not just for the apps. I've done shoots for people for sites like Match.com, too."

I met Jessica a few weeks earlier at an art exhibit where she showcased her photos of Disney princesses at Disney's Magic Kingdom so I knew she'd be able to make all my Tinderella dreams come true. I'll be honest. I had very little creative direction for her other than I wanted the shoot to feel and look unnaturally glamorous... for the sake of the experiment, of course. I wanted the photos to appear very obviously staged to see if this would alter my Tinder experience in any way. Jessica caught on immediately. She suggested we shoot in an outdoor park right before sunset — the golden hour — and that I wear a long, flowing dress and heels to really offset the natural background. It was genius, TBH.

I chose a dress I had ordered from Lulus.com to wear to a wedding I attended a few months back. The long, navy blue dress is made entirely of lace and has a scalloped top that ties around the neck. A dainty, blue ribbon cinches at the waist for a more obvious mermaid-inspired fit.

When I arrived at the park, I immediately regretted my outfit choice. It was cold and wet and there were tons of kids running around while their parents, no doubt, wondered why I had shown up to the park dressed like this at 5 p.m. on a Sunday. Luckily, Jessica had reminded me to bring a pair of flats to trek through the grass so I switched to those before we walked to our first location. Let me just say that this was probably the least glamorous walk of my life since we had to fight off spider webs and rogue weeds along the way.

At the time, I thought it was impossible to feel any more uncomfortable than I already did, that is until Jessica announced that for the first couple shots, she wanted me to sit in the grass. I'm sorry, what? Determined to be as good a sport about this as she was being, I obliged.

Now that my butt was wet, I actually felt a lot less ridiculous because, like, this was rock bottom, yes? No. Sitting on the even colder asphalt for this next shot was. It's January so I am literally freezing my butt off here.

Once I resumed my regular upright position, Jessica shared some of the photos with me and I was relieved. I actually liked a lot of them, although I felt weird about admitting this to her for fear of seeming vain. Up until then (and for the next couple hours, to be honest), I was sure that it would be painfully obvious how uncomfortable I felt during the photo shoot. It wasn't just the thought of having my photo taken that made me wince a little; it was the fact that I would then share the photos on a dating app, where I think most people agree they feel extra vulnerable.

Jessica's positive attitude really helped to lighten the mood and I thanked her for that as we continued shooting. Interestingly, she revealed that, as a family photographer, she was used to working with people who weren't used to having professional photographs taken. "The moms are usually very shy so it helps if they laugh and talk with me. If you're happy, you'll look happy and it makes my job easier," she explains. She's right, of course, and great at her job but I couldn't get past the fact that she noted women were often more uncomfortable than men when having their photos taken. True for a number of reasons, I'm sure. I wondered why, as women, we're so quick to judge ourselves or focus on our flaws and insecurities because that's exactly what I had been doing during the shoot. Why, at a photo shoot that involved no other people (no one physically present for me to compare myself to), did I still feel inadequate?

Jessica captured my idea for the shoot way better than I could have ever explained and, in the end, I had a lot of glamorous photos to choose from to create my Tinder profile. Like, seriously...

I settled on six photos from the shoot — the first time I've ever filled all the photo slots on Tinder. And because Jessica and I connected over our mutual love of Disney, I thought I would throw in a Cinderella-esque joke in my bio: "Life is not a fairytale. If you lose your shoe at midnight, you're drunk." It was important to me to have a funny bio to pair with the photos because I already felt like I would come across as taking myself way too seriously.

Was I ready to swipe? Not really but I did it anyway.

I had my usual number of matches throughout the day but I was surprised when, after the first few conversations, no one had mentioned the photos. In fact, I was relieved. Even those who complimented my physical appearance or opened with lines like, "Hey cutie," didn't ask any questions about them. My matches and I spoke about work, our pets, and what we did over the weekend — totally mundane and totally appreciated.

Sure, I could have swayed the conversations by asking my matches what they really thought about my photos but the impulse to do this (even if only for the #content) was the same impulse that made me doubt myself during the shoot. I'd convinced myself that the photos would be very obviously fraudulent because I felt like a fraud. I felt like I was undeserving of a glamorous photo shoot, especially one that was entirely my idea. Who did I think I was? Kendall Jenner? But to my matches, these were just photos of me that I felt confident enough to share.

I expected that I would learn the most from doing the shoot itself but it turns out, I learned so much more after posting them on Tinder. In the end, the experiment was really one with myself rather than my matches. I had dared myself to do something so out of character that I expected the worst. I expected to to criticize my imperfections, hate the photos, and to feel silly when my matches felt the same way. But that didn't happen.

Like I mentioned earlier, I've done a lot of Tinder experiments for Elite Daily in the past and this is the point in the story where I'd usually insert screenshots of the hilariously awkward things my matches say to me. Interestingly enough, my Tinder conversations after posting the photos were probably some of the most pleasant conversations I've ever had on any dating app.

The truth is, though, it's not really about them. It never was.

Thanks to Jessica, I managed to make it through the shoot with a smile on my face and thanks to my unsuspecting matches, I managed to teach myself a valuable lesson. I'm worthy of whatever I think I deserve. This week, it's a glamorous photo shoot in a crowded park for no reason at all and I'm OK with that. Who knows what next week will bring?